The Jwalamukhi Temple is a famous Hindu Shrine located in Himachal Pradesh, India. It is one of the 51 Shakti Peethas of the country and dedicated to Goddess Jwalamukhi who is considered the deity of the ‘flaming mouth’. Jwalamukhi means ‘Volcano’ and hence the temple does not have an idol or Image, but only a flaming pit representing the deity. There is a three square foot pit, with a pathway developed all around it which leads to a hollowed rock over a fissure in the ground from which flames leap out. This fissure is regarded as the mouth of the Mahakali and in all there are nine fissures which symbolize the nine forms of the Divine Mother in various Avatars. The flames leaping out from the ground are believed to represent the deity and hence, she is revered as the Goddess of Light. Legend has it that this is the place where Goddess Sati’s tongue fell to the Earth when Lord Vishnu cut apart her body with his Sudarshan Chakra. She is revered as Maa Durga who manifested here as the flames that leap through the fissures in the rock. 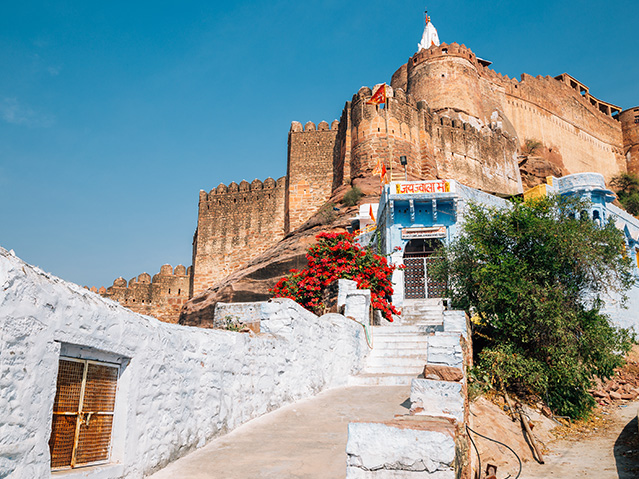 The temple is believed to have been built by a king who tried to ascertain from where a female emerged and drank the milk of the cows in those days. Taking this as Divine intervention, he began searching and upon pinpointing the exact place, he began construction of the temple. Priests were appointed to conduct the Pujas and take care of the temple. It is believed that the Pandavas also carried out some renovation work in the temple. The Mughal Emperor Akbar also visited the temple and tried in vain to douse the flames. He immediately submitted to the Goddess and presented a Golden Umbrella as a mark of his respect. The great Maharaja Ranjit Singh of Punjab visited the temple in the year 1809 and gifted a gilt roof for the temple. His son, Kharak Singh also gifted a pair of silver plated folding doors to the temple.

The Jwalamukhi temple is regarded as one of the Shakti Peeths which tells the story of Sati, the consort of Shiva. When her father Daksha organized a yagna, he deliberately rebuked Shiva as an ascetic and one unworthy of his daughter. Sati took this a personal affront and jumped into the sacrificial fire, taking her own life. Shiva was enraged and placing Sati’s body on his shoulders, he commenced the Tandav or divine dance of destruction. To stop Shiva from destroying the Universe and creation, Lord Vishnu severed the dead body into several pieces with his discus and the places where these pieces fell are called Shakti Peeths. The Jwalamukhi temple was constructed at the spot where Sati’s tongue is said to have fallen.

The building of the temple has a gilt dome and silver plated folding doors. Within it is a square pit from which dancing flames leap out and this has been happening since time immemorial. The flames represent the Goddess and symbolize her power as the all-consuming Shakti (energy).The unique feature of this temple is the absence of an Idol or Image which transcends all Earthly perceptions of Divine Beings by manifesting in the basic element of Energy itself.

The structural design of the shrine is simple and it is built on a wooden platform in the ‘Indo-Sikh’ style of architecture. The dome and spire are gilded with gold and the main door is plated with silver. There is a huge brass bell in front of the main shrine which was presented by the King of Nepal.

The last Aarthi is highly unique since it is performed only in this temple and nowhere else. It is conducted in two parts with Slokas from ‘Soundarya Lahri’ being recited during the Aarti time. While the Aarti is being performed, the bed of the Goddess is decorated with beautiful dresses and jewelry. A grand Havan is also performed once a day while reciting Hymns from the Durga Saptasati.

A divine religious aura pervades the temple throughout the year, and devotees are enraptured with its spiritual ambience.

Benefits or Blessings of the primary deity- Jwalamukhi Temple

People from the entire world visit this unique temple to obtain the blessings of the divine Mother and many believe that offering prayers here will wipe out their sins. It is said that the flames from the pits purifies the soul and leads to the end of struggles, while also paving the path for happier days to come.

The temple is located in the scenic state of Himachal Pradesh and the main city is Dharamshala which is the home of the Dalai Lama. Jwalamukhi is around 140 km from Pathankot via Dharamshala, 30 km from Kangra and 56 km from Dharamshala.

By Flight:The nearest Airport is located at Guggal- approximately 46 kilometres from Jwalamukhi temple. Indian Airlines operates three flights a week to Dharamshala from Delhi. Taxis are available from the Airport to the temple.

By Rail:Pathankot is the nearest Railway Station-approximately 123 kilometres away. There is also a mountain train plying from Kangra. Buses and taxis are available from outside the station.

By Bus:Regular buses ply from Pathankot to Jwalamukhi temple.