Introduction about the ISKCON Temple at Vrindavan

The International Society for Krishna Consciousness was established by Bhaktivedanta Swami Prabhupada in 1966. The Intent of the society is to uplift the general well-being of mankind. It propagates the message of the Holy Bhagavad Gita and Vedic scriptures, which help inculcate a sense of clarity in the minds of individuals. The core essence of this movement is to help people lead a simple and pure life based on the traditional principles of Hinduism. The Society is credited with the construction of numerous Temples, with the first being the ISKCON Temple at Raman Reti in Vrindavan. The primary deity of the temple is the image of Krishna-Balarama, which is visible from the entrance and beckons one into the temple premises. The complex also houses shrines dedicated to Gaura-Nitai and Radha Shyamsundar, with the images of the deities rivaling the main Image in splendor and beauty. The Temple is also known as the Krishna Balarama Mandir and is one of the most sought after religious shrines of Lord Krishna. Devotees from all over the world converge on the Temple, especially in the festive season to seek the blessings of the Lord. 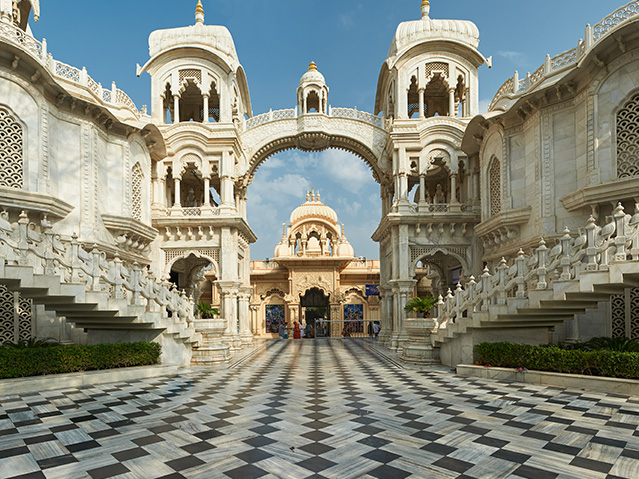 History of the ISKCON Temple at Vrindavan

The Krishna Balarama temple in Vrindavan is a magnificent structure made of marble and was built in 1975. The temple was set up by Acharya Bhaktivedanta Swami Prabhupada, the founder of the ISKCON society. After his demise in 1977, his mortal remains were laid to rest in the temple precincts and his Samadhi occupies pride of place in the front of the shrine.

Significance of the ISKCON Temple at Vrindavan

The premises of the Sri Krishna Balarama Mandir were extended, in keeping with the vision of Swami Prabhupada to establish an International center in Vrindavan. Located on the banks of the Yamuna River, this imposing structure is visible from almost any corner of the city and visitors are greeted by the stunning façade of the temple. Within the temple complex, one is immediately greeted by the Samadhi of Swami Prabhupada which is entirely made of white marble, while the gilded image of the Swami enchants everyone with its ethereal appearance. The alluring image of Krishna-Balarama is located under the central spire of the temple and the other shrines are located along-side the main shrine. The temple galleries are replete with various images of Lord Krishna, depicting his antics and other scenes from his life. The complex is divided into several sections where religious and cultural activities are conducted day and night. The shrine also houses a television studio which broadcasts the preaching of the ISKCON Society. Several stalls are set-up inside the complex which offers holy books and other knick-knacks for visitors. Many devotees and priests also remain here to serve the Lord and promote his ideals. One can also see many people of foreign origin frequenting the temple and participating in the religious and spiritual activities of the temple. The religious and spiritual aura of the shrine is so captivating, that is attracts visitors throughout the year from all corners of the world.

Architecture of the ISKCON Temple at Vrindavan

The ISKCON Temple in Vrindavan is built in the contemporary architectural style and pays tribute to the builders for the design and outlay of the structure. The structure is made of exquisite white marble and its breath-taking beauty is truly a sight to behold. The ambience is exhilarating and a feeling of peace and calm pervades the entire temple complex. The chanting of the Maha Mantra ‘Hare Rama Hare Krishna’ pervades the air and everyone present is taken in by the charm the temple exudes.

Several rituals and ceremonies are conducted at the ISCKCON temple every day, with many devotees participating in the events. The temple enchants visitors with its charming spirit and the premises vibrate with religious and spiritual fervor all day long. Janmashtami , Rama Navami, Guru Poornima, Diwali, Annakut, Chandan Yatra, Jhulan Yatra (Swing festival), Kartika, Balaram Purnima, Radhashtami and Govardhana Puja are major festivals that are celebrated with gusto in the temple.

The festival of Janmashtami, which commemorates the birthday of Lord Krishna, is celebrated with great enthusiasm and fervor. The whole temple is decked up with flowers, flags, ribbons and garlands, with the entire town of Vrindavan participating in the celebrations.

Benefits or Blessings of the primary deity- ISKCON Temple at Vrindavan

Praying at the ISKCON temple is said to free one from the cycle of birth and death. It is also believed that the accumulated sins of the lifetime are washed away and one becomes purified. Even the worst sinner is absolved of sins with the blessings of the Supreme Lord Sri Krishna.

Location – How to reach the ISKCON Temple at Vrindavan

By Rail: The Railway Station is located about 2 kms away from the ISKCON temple.

By Bus: Several buses ply to and from Vrindavan and the neighboring cities.

Local Transport: Taxis, buses and three wheelers are available to take one to the temple from various parts of the city.