Har Ki Pauri is a sacred Ghat on the banks of the River Ganga in the ancient town of Haridwar in the Indian state of Uttaranchal. This hallowed place venerates Lord Shiva who is known as Hari. Therefore, the name Har-Ki-Pauri literally translates to ‘the steps of Lord Shiva’. It is widely believed that the two mighty Gods of the Hindu Pantheon Lord Shiva and Lord Vishnu visited the Brahmakund in Har Ki Pauri during the Vedic period. A stone wall bearing a large footprint said to be that of Lord Vishnu bears testimony to this fact. This revered place is considered the spot where the Ganges leaves the Himalayas and flows into the plains. The Ghat is situated on the west bank of the Ganges canal where the river takes a diversion to the north. Har-Ki-Pauri is probably the most revered place for the followers of Shaivism, and also one of the most holy places for Hindus in general. It is also the place where the world famous Kumbha Mela takes place every twelve years and the Ardh Kumbh Mela which takes place every 6 years. Millions of pilgrims take part in the proceedings and it witnesses the largest ever congregation of human beings anywhere on the Planet. Even otherwise, the city of Haridwar is packed with pilgrims throughout the year. 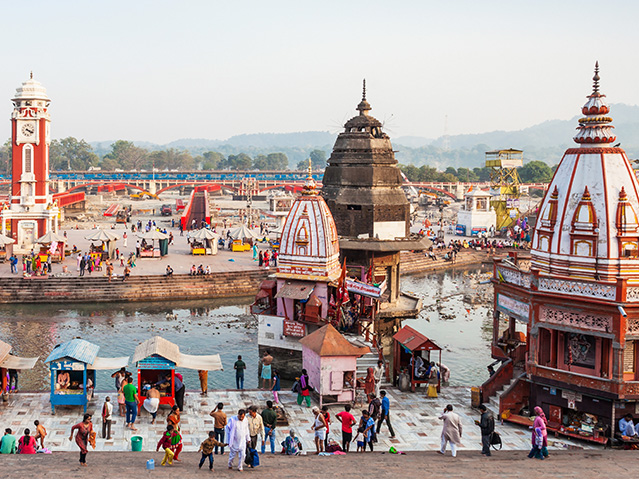 The origins of Haridwar are not easy to ascertain since the city is almost as old as time itself and dates back to even Pre-Vedic times. However, many schools of thought suggest it was established in its current form by King Vikramadiya in the 1st century. His brother Bharthari used to come here to meditate on the banks of the Ganges.

Several temples have come up on the steps of the ghats, with most being built in the late 19th century. An extension of the ghats also took place in 1938 by Hargyan Singh Katara, a Zamindar from Agra, and then it was renovated once again in 1986. Several extension and renovation works of the Ghats has been carried out over the years to accommodate the ever increasing number of devotees.

Haridwar is one of the four places on Earth where drops of Amrita accidentally spilled from the Kumbha (pitcher) when it was being carried by Garuda, the celestial bird and vehicle of Lord Vishnu. The exact place where the nectar fell is called Brahma Kund at Har-Ki-Pauri. Millions of devotees converge on Haridwar to celebrate this event and take a dip in the waters.

The Har-Ki-Pauri ghats are an incredible sight to witness at twilight when thousands of Diyas (lamps) are let into the river and float gently down the waters. The priests performing Aarti accompanied by the gongs of the temple bells and the chanting of people filling the air makes for the most serene and mesmerizing experience ever.

The ambience prevailing in the Har-Ki-Pauri Ghats in Haridwar is always vibrant and filled with a spiritual energy which is unrivalled by any other place of worship. The place reverberates with religious fervor, and during the Kumbh Mela millions converge on this holy place to experience the divinity that pervades the surroundings. The Maha Kubh Mela and the Ardh Kumbh Mela are celebrated with such enthusiasm that it resembles no other sight on Earth.

The Punjabi festival of Vaisakhi to celebrate the Harvest season in April also witnesses a huge turnout and is celebrated with great fanfare.

The Ganga Aarti performed every day at 18:00 hrs is a spectacular scene to witness, with the enthralling sight of the Diyas floating in the water making for a simply divine out-of-this world spectacle which cannot be expressed in words.

Benefits or Blessings of the primary deity- Har-Ki-Pauri, Haridwar

Bathing in the holy waters of the Ganges is said to relieve one of all accumulated sins and cleanses the soul. People who are fortunate enough to take a dip here are enthused with a fresh spiritual energy which radiates from their being. Taking a dip in the Har-Ki-Pauri Ghats is considered a must for Hindus at least once in their lifetime.

Location – How to reach Har-Ki-Pauri, Haridwar

Haridwar is a highly important religious and spiritual center which attracts devotees and tourists from all over the world. It is easily accessible by various modes of transport.

By Air: The Airport in Dehradun is around 45 km away. The nearest International Airport is in New Delhi.

By Train: Haridwar is well connected by Rail and the Station is about 1.2 km away from Har-Ki-pauri.

By Bus: Haridwar is well connected with neighboring towns and cities by bus service.

Local Transport: Rickshaws and three wheelers are available to take one to Har-Ki-Pauri.