Introduction about the Elephanta Cave Temples

The Elephanta Cave Temple complex is an extensive network of beautifully sculpted caves and carvings which outlines the brilliance of ancient Indian craftsmanship. Located on Elephanta Island in Mumbai Harbour, this expansive series of cave houses are shrines dedicated to several deities. Locally called as ‘Gharapuri’ which means city of caves, the caves are situated on an island off the Arabian Sea in the state of Maharashtra. The complex consists of two groups of caves affiliated to the Hindu and Buddhist religion. The Hindu caves are a series of exquisite stone sculptures cut out of solid basalt rock, representing the Shaiva sect and dedicated to Lord Shiva. The main cave suffered extensive damage during Portuguese occupation and was deemed unfit for worship. Renovation work was taken up in 1970 and subsequently it was declared a UNESCO World Heritage Site in 1987. The Archaeological Survey of India along with The Indian National Trust for Art and Cultural Heritage (INTACH) handles the affairs of this magnificent cave and is responsible for its maintenance and upkeep. This unique series of cave temples is today a much sought after destination and attracts visitors from all over the world.

History of the Elephanta Cave Temples 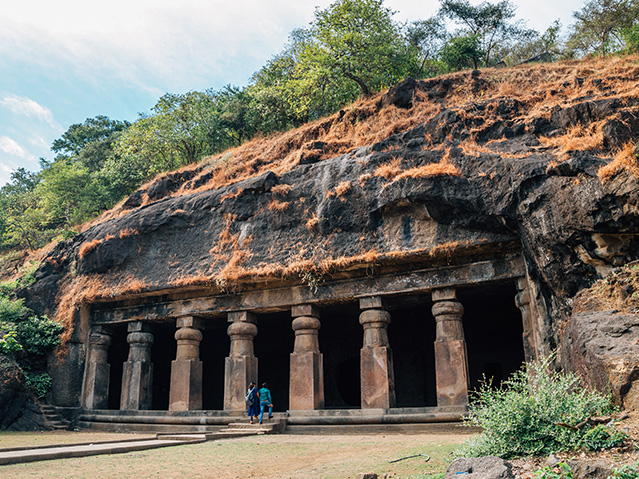 Steeped in the mists of time, it is difficult to ascertain the identity of the original builders, but the caves are widely believed to have been built between the 5th and 8th centuries. Many conjectures also point to the influence of the Pandavas during the Mahabharata era and several sources also attribute the origin to Banasura, a great devotee of Lord Shiva. Many historians trace the origin to the reign of the Konkan Mauryas who ruled the region sometime in the 4th century. The Kalachuris of the 6th century and the Chalukyas are also believed to have played a major role in the construction of the caves.

Significance of the Elephanta Cave Temples

The complex was assigned the moniker ‘Elephanta’ by virtue of the rock-cut black stone statue of an elephant that was installed on a mound at that time. While a large portion was desecrated by the Portuguese, the Trimurti of Lord Shiva in the main cave somehow survived and forms the focal point of attraction. This spectacular work of art symbolizes the three faces of Shiva as the holy trinity of Hinduism viz. Brahma, Vishnu and Mahesh.

The caves are considered a masterpiece of workmanship and reflect the creative genius of the builders. They represent the incredible cultural tradition of ancient Indian artistry and the high degree of sophistication prevalent in those times.

Architecture of the Elephanta Cave Temples

The Elephanta cave temples are built in the rock-cut architectural style, and the main cave is a Hindu temple complex covering an area of 60,000 square feet. Situated on the hillside, this complex has several chambers, courtyards and various other shrines. The entrance to the central shrine is flanked by two Dwarapalas (gate keepers) and the main deity Shiva is represented in the form of a Lingam. The Buddhist complex consists of a small group of caves, along with a religious Stupa monument made in brick. Traces of the Chalukyan architectural style is also evident in several features of the cave complex and many also have Gupta artistic characteristics.

Though the main cave dedicated to Lord Shiva does not serve as a regular place of worship, the festival of Mahashivratri is celebrated with fervor and people turn out in large numbers to pray. The Elephanta cave temple complex is a favored destination for tourists and attracts many visitors who come to admire the spectacular architecture.

Location – How to reach the Elephanta Cave Temples

The Elephanta caves are located off the Mumbai Harbour and accessible by:

By Ferry/Boat: Boats and ferries ply from the Gateway of India in Mumbai and the journey takes about an hour by sea. Boat service is from 9: 00AM to 5: 00PM.