Chintpurni is a major Hindu pilgrimage center located in Una District of Himachal Pradesh, India. This temple is one of the 7 major Shakti Peethas of India and dedicated to Mata Chintpurni Devi who is also known as Mata Shri Chinnamastika Devi. The Goddess here is depicted with a severed head in a Pindi (Phallic Form) and the term ‘Chinnamastika’ itself suggests –‘The headless one’. The absence of a head on the deity suggests the separation of the mind from the body, indicating the freedom of the conscious soul from the physical confines of the mortal body. According to Hindu Mythology, the Goddess is also considered an Avatar of Goddess Durga. Chinnamastika Devi is protected by temples of Lord Shiva located in the North, South, East and West which are almost equidistance from Chintpurni. Devotees flock to the temple seeking the blessings of the Goddess to fulfill their wishes and relieve them from worries. The deep rooted belief is that the Goddess never disappoints anyone who comes to her with a clean mind and heart. 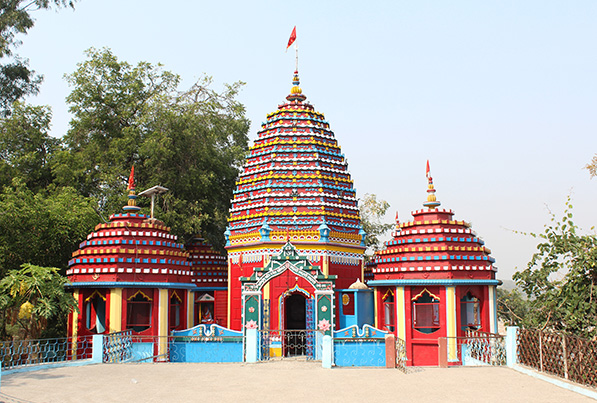 The Maa Chintpurni shrine is believed to have been established about 26 generations ago in Chhaproh village by Pandit Mai Das, a Saraswat Brahmin. The place came to be known as Chintpurni over a period of time after the famed deity of the Temple. His descendants are reportedly still residing in the city and perform Pujas and ceremonies at the temple. They are till today considered the official priests of the temple.

The Chintpurni temple is regarded as one of the 51 Shakti Peeths which tells the story of Sati, the consort of Shiva. When her father Daksha organized a yagna, he deliberately rebuked Shiva as an ascetic and one unworthy of his daughter. Sati took this as a personal affront and jumped into the sacrificial fire, taking her own life. Shiva was enraged and placing Sati’s body on his shoulders, he commenced the Tandav or divine dance of destruction. To stop Shiva from destroying the Universe and creation, Lord Vishnu severed the dead body into 51 pieces with his discus and the places where these pieces fell are called Shakti Peethas. The Chintpurni temple was established at the spot where Goddess Sati’s feet are believed to have fallen.

The Goddess signifies extreme self-sacrifice and divine selflessness. According to legend, Goddess Chandi defeated the demons after a fierce battle, but two of her emanations were still thirsty for more blood. To quench their thirst, the Goddess is said to have severed her own head and is depicted holding her own head feeding the yoginis with the blood spurting from the arteries.

This holy place was also the repository of Hindu pilgrimage and marriage records. All these records were microfilmed by the Genealogical society of Utah, USA. Priests would record the name, date, home-town and other details of each and every pilgrim and group them together according to family and ancestral details.

The Garbagriha is located in the center of the temple and the image of Mata Chintpurni is installed here in the form of a Pindi (Round Stone). Devotees worship the deity with offerings of sweets, ghee, flowers and coconuts. The temple comes alive during the time of Navratri with grand fairs and lots of festivities being observed during this period. People from far and near frequent the shrine, with long queues waiting patiently to have a glimpse of the deity. In recent years, the temple infrastructure has been repaired and modified to accommodate the large number of people during the festival season.

Benefits or Blessings of the primary deity- Chintpurni Temple

Chintpurni Maa is credited with possessing great Cosmic Powers and grants the desires of her devotees. Worshipping her is said to dissolve all worries and eases the mind, while letting the aches and burdens of mortal life ebb away. The name ‘Chintpurni’ itself implies that the Goddess relieves the stress and tensions of devotees. It is said that the Goddess does not disappoint those who visit her with a pure heart and fulfills all their wishes.

Location – How to reach the Chintpurni Temple

The Chintpurni temple is situated on one of the highest peaks of the Sola Singhi range at an elevation of 940 meters. It is about 3 km west of Bharwain on the Hoshiarpur – Dharamshala road. The Chintpurni bus stand is about 1.5 kms from the temple and after this point, no private vehicles are allowed. People walk from here on and half the path winds up a gentle incline. The path also traverses a very busy market which is full of local wares and crafts which one can purchase as souvenirs.

Location – How to reach the Chintpurni Temple

Visitors have several options to reach Chintpurni from Delhi and other places in North India.

By Air: The Nearest airport is at Gaggal in Dharmshala, approximately 60 kms away.

By Road: Chintpurni is accessible by a well-developed road network which links all major cities and towns.

By Bus: Many state transport buses ply from neighboring cities and towns of Chintpurni at regular intervals.

By Train: The nearest railway Station is Amb Andaura, which is about 20 kms from Chintpurni.

Local Transport: Taxis, buses and three wheelers are available to take one to the temple.