Introduction about Brahma Temple in Pushkar

The Brahma Temple in Pushkar is a famous Hindu temple situated at Pushkar, Rajasthan. Very few temples are dedicated to the Creator-God Brahma who is one of the Holy Trinity in the Hindu pantheon. There is an image of the deity along with his second consort Gayatri in the Sanctum Sanctorum of the temple. This is a place of deep spirituality and thousands of devotees visit the temple from all over the world to have a Dharshan of the Creator. Married men are not allowed to conduct Pujas in the temple and only a Sanyasi (ascetic) sect can perform the rituals. The temple is considered as one of the ten, most religious places in the world and one of the five sacred pilgrimage places for Hindus.

History of Brahma Temple in Pushkar 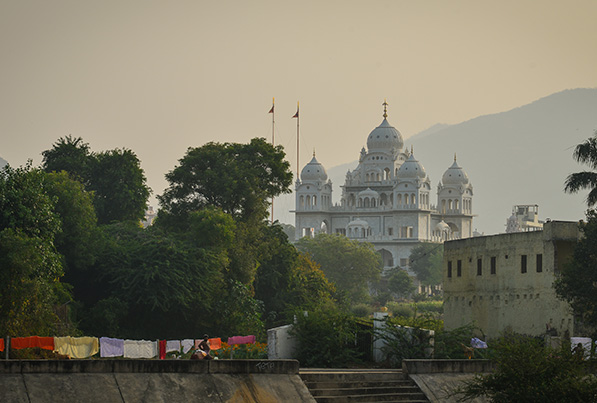 The original temple is believed to be over 2000 years old and is said to have been constructed by sage Viswamitra after Brahma’s yagna, with Brahma himself choosing the place for its location. The great saint philosopher Adi Shankara is said to have renovated this temple and it has also suffered several desecrations by Muslim invaders. The current structure dates back to the 14th century and Maharaja Jawat Rai of Ratlam made additions and repairs, while retaining the original temple design.

The Padma Purana states that Lord Brahma while in his quest for a suitable place to perform a yagna, accidentally dropped a Lotus. A lake sprang up at the spot the Lotus fell on Earth and Brahma, considering it a good omen, decided to perform the ritual at that very spot. He called it Pushkar and married a local maiden Gayatri to perform the necessary rituals for the yagna. When his wife Saraswathy heard of this, she was enraged and cursed Brahma that he would only be worshipped in Pushkar and nowhere else on Earth.

Significance of Brahma Temple in Pushkar

The Pushkar temple is reportedly the only Brahma in the world, but of late, some five temples have been built venerating the Creator-God. The priests follow a strict religious procedure wherein householders are not allowed to enter the Sanctum Sanctorum to worship the deity. All offerings are given from the outer hall of the temple with the worship being carried out by Sanyasis who belong to the Parashar Gotra lineage.

A unique aspect of this temple is that it does not discriminate on the basis of caste, creed or religion and people of all faiths are welcome to participate in the worship of Lord Brahma. Even atheists who have no religious faith or belief are most welcome to take part in the proceedings.

Architecture of Brahma Temple in Pushkar

Several marble steps lead to the entrance gate which is decorated with pillared canopies and the entry leads to a pillared outdoor hall and then to the Garbagriha. This magnificent shrine is built with stone slabs and blocks with molten lead joining them together. The spire in the temple and the swan (the mount of Brahma) are the unique features of this temple. The walls are inlaid with hundreds of silver coins given by devotees as offerings to Lord Brahma. A silver turtle adorns the mandap facing the door to the Sanctum Sanctorum which is built of marble. Lord Brahma is portrayed as seated in a crossed leg position, characteristic of his role as the creator. There is a four headed image of Brahma which symbolizes his grace favoring all four directions. His four arms hold the primary aspects of creation, life, and the cycle of birth and death which leads to a continuous process of regeneration. Several images of Lord Vishnu, his Dwarpalas and his mount Garuda are also featured.

Pilgrims and devotees throng the temple during the festive season and enter the temple after taking a dip in the Pushkar Lake. After offering prayers to Lord Brahma, one is expected to worship his consort Gayatri and then visit other temples in the vicinity. The temple is open from morning to evening with a short break in the afternoon. One Aarthi is held in the morning and two in the evening at auspicious times.

Benefits or Blessings of the primary deity- Brahma Temple in Pushkar

The Brahma temple in Pushkar has provided religious solace to millions of people and transformed the lives of many with its spiritual power. All those who worship here with unconditional faith will not go away disappointed and are granted their desires. Worshipping here is said not only to benefit the individual but also humanity as a whole. Praad is distributed to one and all after the ceremonial Aartis and carries the personal blessings of the deity.

Location – How to reach Brahma Temple in Pushkar

Pushkar is a major pilgrimage center and well connected with the rest of the country. The temple is open between 6:30 am and 8:30 pm during winter and 6:00 am to 9:00 pm during summer and closes for a brief interim in the afternoon between 1:30 pm to 3:00 pm.

By Flight: The nearest Airport linking Pushkar with the rest of the country is Jaipur which is approximately 131 kilometres away. You can catch a taxi from the Airport to Pushkar and enjoy the Darshan of the Lord.

By Rail: The nearest railway station is Ajmer, approximately 10 kilometres away. Buses, taxis and auto rickshaws are available to take you to the temple.

By Bus: There are regular buses plying from major cities of the country to Ajmer and from there, you can catch a bus, taxi or auto rickshaw to take you to the temple.