The Ajanta Cave temples are a magnificent architectural wonder that depict the rich cultural legacy of India. Located near Aurangabad, the cave temples are renowned throughout the world and recognized as a world heritage site. The Ajanta Caves served as an important religious center of Central Indian empires and depict the culture prevalent in Central India at that time. The Cave temples are dedicated to Lord Buddha and there a total of 29-30 chambers. These caves were once frequented by the followers and students of Lord Buddha who left their imprint by adorning the caves with artistic paintings and carvings depicting the life of Buddha. There are also numerous human and animal figures carved in the rocks. These caves have withstood the vagaries of time and the breathtaking art and architecture portrayed inside are a marvel of human skills and craftsmanship. The sheer beauty and elegance of these caves attracts millions of visitors each year from all four corners of the world and are a popular tourist destination. 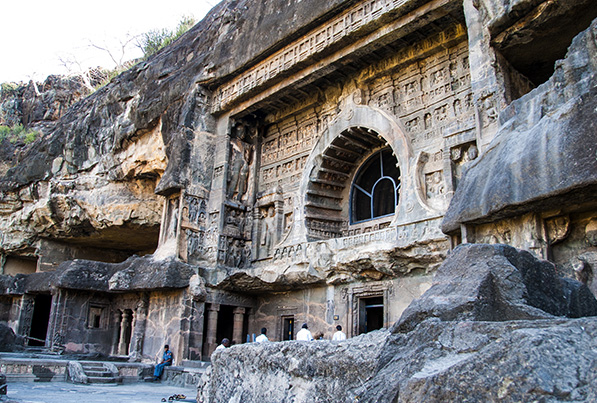 Steeped in the mists of time, the origins of these caves are difficult to trace, but it is believed that the first segment of these exquisite rock-cut caves were built in the 2nd century BC. The Vakatakas and the Guptas are said to have made the second segment in the 6th century AD. The beautiful pictorial carvings and murals represent various facets of human society, along with flora and fauna. Several mythical creatures are also portrayed in various positions. The caves are replete with examples of traditional Indian art with its sheer brilliance and attention to detail which rivals the finest contemporary art works and in many instances, surpasses modern art and paintings. The caves appear to have been abandoned in a hurry due to some sudden events which are not entirely easy to comprehend. Dense jungle surrounded the area over a period of time and the caves were hidden from human eyes for several centuries. The caves were rediscovered by an officer of the British army, Captain John Smith on April 28. 1819. Out on a tiger hunt, he entered a gorge and noticed a hollow in the cliff wall which was covered with dense vegetation at that time. He was astounded at the sheer magnitude of his discovery and taken aback by the magnificence of the caves. He is said to have carved his name on the wall of the cave which is still faintly visible till today, but now out of reach as the debris has been removed to make way to the caves.

These caves contain a treasure trove of ancient Indian art at its finest and the style of artwork has influenced numerous contemporary artists of the 19th and 20th century. The obsession with the beauty of the artwork persists till date and forms the basis of several books and periodicals which were subsequently published. The thirty caves are divided into 'Chaitya-Grihas' (stupa halls) and 'Viharas' (dwelling halls) and navigating between each cave is via a flight of steps which are still preserved in their original condition. Several caves were used as prayer halls and the others served as dwelling units for the followers and students of Buddhism. The carvings and paintings in each cave resound with the history of Buddhist times and represent the incidents of Buddha’s life, Bodhisattvas and the Jatakas. Exploring the caves is a sublime experience and one is literally transported back into another era all together, making it a must visit tourist site.

Indian stone cutters have done a remarkable job in carving out the cave frescoes and murals and most of the paintings are made using the Tempura technique which involves painting on a dry surface after the wall is coated with a mixture of clay, cow dung and rice husk and then coated with a layer of lime. Skilled artisans carved out the interiors with columns, doorways, arched windows taking shape by hollowing out the rock. The stone-cutters started from above and worked their way downwards; working with pick-axes and then leveling by hammer and chisel. The ceilings are decorated with beautiful bas-reliefs and the walls covered with beautiful murals. The shine and gloss of the beautiful murals adorning the stone walls was achieved by adding powdered conches and seashell, which still retain their luster till today. All the work was carried out with great precision and attention to detail which explains why most of the art work is still fairly well preserved even after being abandoned in the heat and humidity of the tropical climate for almost 1,500 years.

The Ajanta Caves are a delight to visit not only due to the history attached to the site, but also because of the beautiful painting, murals and frescoes which abound in the caves. The site is easily accessible by various modes of transport for the convenience of visitors.