Introduction about the Konark Temple

The Konark Sun temple is one of the few temples dedicated to Lord Surya the Sun God. Out of the lot, this temple outshines the rest in architectural splendor and brilliance. It is located in the Eastern Indian state of Orissa that is now known as Odisha. This imposing temple is in the shape of a gigantic chariot, along with intricately carved stone wheels, pillars and walls. Sadly, most of this incredible structure is in ruins, but what remains bears testimony to the remarkable craftsmanship of ancient days. Designated as a UNESCO World Heritage Site, this extraordinary temple also counts as one of the Seven Wonders of India. This spectacular edifice is a much sought after pilgrim and tourist center and attracts scores of people every year.

History of the Konark Temple 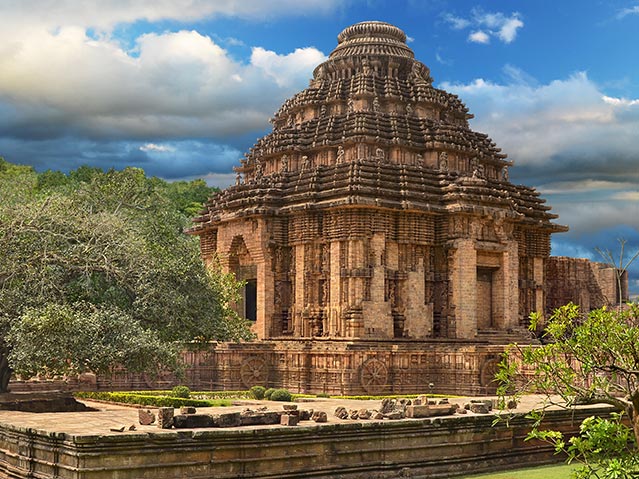 The temple is believed to have been built in the middle of the 13th century and pays tribute to the engineering and artistic excellence of the builders. It was built by King Narasimhadeva I of the Ganga Dynasty and took 1200 artisans a period of 12 years to complete this masterpiece. The temple was built in the shape of a massive chariot mounted on 24 wheels, each having a diameter of about 10 feet and drawn by seven powerful horses. The workmanship of the temple is so brilliant that it is hard to believe it could have been done with the primitive technology available in those days. Many great statesmen have sung odes to the remarkable workmanship of this splendid structure.

Significance of the Konark Temple

The temple is built with such brilliance that the wheels are designed as sundials and can be used to calculate time with precision. Historians suggest that there could have been another temple in the region which was built by Pundara Kesari of the Somavasami Dynasty sometime in the 7th century.

The Konark museum managed by the Archeological Survey of India has an extensive collection of sculptures salvaged from the temple ruins. Visitors can view these beautiful artifacts and get an idea of the grandeur which prevailed in those days.

Architecture of the Konark Temple

The temple is a little away from the beach, though it was originally built on the shoreline. It is built in the Traditional Kalinga style of architecture and precision oriented in such a way that the first rays of the Sun fall on the main entrance. Built from Khondalite rocks, the temple reportedly had a Sanctum Sanctorum, which unfortunately collapsed in 1837 due to soil erosion. Though the imposing audience hall (Jaganmohana) still stands, most of the other parts of the temple are in ruins. Among the structures still left standing are the dance hall (Nata mandira) and dining hall (Bhoga mandapa). There are also two smaller temples located nearby called the Mayadevi temple and one more, dedicated to a Vaishnav deity.

The Aruna Sthambha is another significant feature of the temple which was built toward the end of the 18th century. The Sthambha was relocated from the entrance to the Singha-Dwara (Lion's Gate). The pillar is dedicated to Aruna, the charioteer of the Sun God . Most of the deities are missing. Hence, worship is not carried out in the temple.

The Konark temple is renowned for the spectacular dance festival which is organized by the authorities every year. Scores of visitors from all over the world converge on the temple during this time to witness the proceedings.

Location – How to reach the Konark Temple

The Konark temple is a major tourist attraction and renowned internationally. It is easily accessible by various modes of transport.

By Air: The nearest Airport is in Bhubhaneshwar, about 64 km away.

By Train: Puri is the nearest Railway Station and around 31 km away from the temple.

By Bus: The Konark temple is easily accessible by state and private bus services.