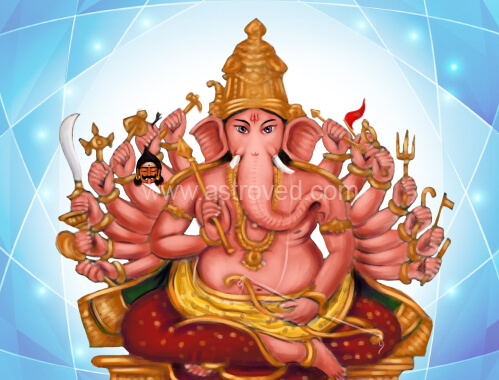 Veera Ganapati is regarded as the 4th among the 32 different forms of Ganapati. ‘Veeram’ or ‘Veera’ refers to valor and courage. Veera Ganapati is thus, a valiant warrior God, who occupies the position of a fearless commander. True to his name and characteristics, he appears as a mighty and commanding entity. Veera Ganapati possesses as many as sixteen arms and holds in them numerous powerful and varied weapons like chakra (discus), bow and arrow, trident, sword, club, hook, elephant goad, mace, hammer, spear, battle ax, shield, Nagapasha (serpent noose) and victory flag. He also holds a fearful vethal or goblin, as a symbol of the mind.

This form of Ganesha can be seen as a painting in the Maha Ganapati temple in the Kerala capital Thiruvananthapuram and as a sculpture in some temples in Mysore region, where all the 32 Ganapati forms are on display. He can also be worshipped as an idol in the very famous Meenakshi Sundareswarar temple in Madurai, in the state of Tamil Nadu.

Veera Ganapati is regarded as representing the primordial element Agni, the fire. It is believed that worshipping this powerful form of Lord would help the devotees to overcome fears and threats, and develop courage so that they can face life’s challenges with confidence and win over them. He is also believed to remove ignorance and evil.

The mantra, which reads as under in Sanskrit, describes the form of this valiant Ganapati form in great detail and prays for his grace and blessings

Chanting the Veera Ganapati Mantra with faith, can be an effective means of propitiating this illustrious Lord.