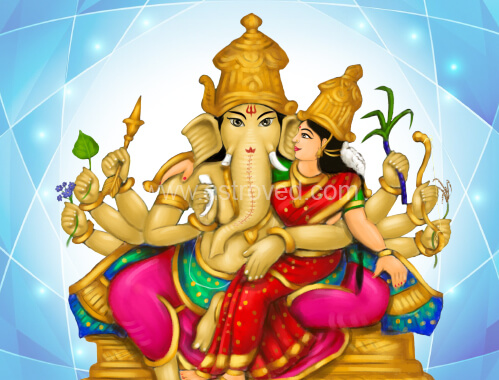 Urdhva Ganapati is regarded as 19th among the 32 different forms of Ganapati. The Sanskrit word ‘Urdhva’ means ‘up,’ ‘upwards’ or ‘above,’ and here it means ‘lofty.’ Urdhva Ganapati hence denotes ‘the Lord, who is elevated or exalted.’ True to his name, Urdhva Ganapati is in a sublime form, sitting in the tantric posture and also seating his consort Shakti Devi on his left lap. He is shining in golden yellow color and has as many as eight hands, the main left of which gently embraces Shakti, while the principal right holds his own broken tusk. He holds, in his other six hands, a mace, a lotus, a blue lily, a sprig of paddy, a sugarcane bow, and an arrow. He is normally shown with his trunk curling near the breast of his consort.

This form of Ganesha can be seen as a painting in the Kerala capital Thiruvananthapuram and as a sculpture in some temples in Mysore region, where all the 32 Ganapati forms are on display. Urdhva Ganapati can also be worshipped in an idol form, in the Mahalingeshwara temple in the city of Madurai, in the state of Tamil Nadu.

Pooram Star, also known as Purva Phalguni Nakshatra is said to be related to this aspect of Ganapati.

Urdhva Ganapati remains an elevator and a benefactor, who improves the lot of his devotees. It is believed that his worship would provide refuge to them from all difficulties, and help them to overcome impediments and rise high in life.

The mantra, which reads as under in Sanskrit, glorifies him as ’the raising Ganapati,’ describes his appearance and prays for his blessings.

Chanting the Urdhva Ganapati mantra with faith, can be an effective means of propitiating the powerful Lord.