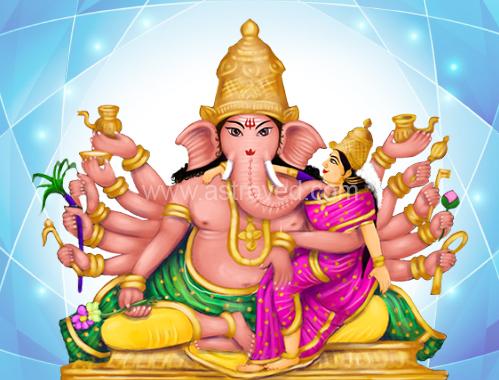 Uddanda Ganapati is regarded as the 24th among the 32 different forms of Ganapati. ‘Danda’ is a word which stands for ‘punishment.’ This Lord thus turns out to be a ‘punisher,’ - the one who punishes the wicked and evil, thus upholding virtue and protecting the good. Hence, Uddanda Ganapati is a very rare, angry and aggressive form of the Lord. Understandably, he is red in complexion and has a third eye, like his father Shiva, and is also seen with his consort Shakti Devi seated on his left lap. Though having only a single face, he has as many as 12 hands, holding in them sacred and precious items and also weapons like, his own broken tusk, mace, noose, Ratna Kumbha (pot of gems), blue lily flower, lotus flower, sugar cane, a sprig of paddy, pomegranate fruit, Kamandalu (water vessel) and a garland. Some depictions show him as having only 10 hands.

This rare form of Ganesha can be seen as a painting in the Kerala capital Thiruvananthapuram and as a sculpture in some temples in Mysore region, where all the 32 Ganapati forms are on display. However, this Lord can be worshipped in an idol form, in the very famous Lord Krishna temple at Guruvayur, in Kerala state.

Moolam star, also known as Moola Nakshatra, is said to be related to Uddanda Ganapati.

Uddanda Ganapati is a ruthless upholder of Dharma (righteousness) and the tormentor of the wicked and hence, it is believed that his worship would offer great protection to the devotees. They can also get relieved from many constraints and bondages.

The mantra, which reads as under in Sanskrit describes his form in precise detail, sings his glory, seeks his blessings and prays for his mercy and grace.

Chanting the Uddanda Ganapati mantra with faith, can be an effective means of propitiating the powerful Lord.