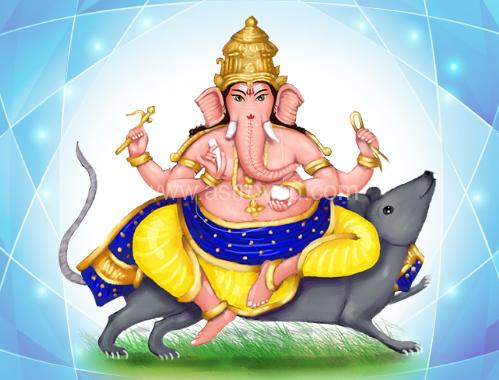 Srishti Ganapati is regarded as the 23rd among the 32 different forms of Ganapati. The Sanskrit word ‘Srishti’ simply means ‘creation.’ Srishti Ganapati thus remains the God of creation, a role normally attributed to Lord Brahma. He is also believed to be an integral part of all his creations and thus, the representative Lord of all the manifestations in the universe. Srishti Ganapati is a kind form, appears in a crimson-red complexion and is happily seated on Mooshika Vahana, his well-celebrated mouse mount. He has a single face, and four hands holding his own broken tusk in his principal right hand and having an elephant goad, noose, and mango fruit, in the others.

This form of Ganesha can be seen as a painting in the Kerala capital Thiruvananthapuram and as a sculpture in some temples in Mysore region, where all the 32 Ganapati forms are on display. However, this Lord can be worshipped in an idol form, in the very famous hill temple of Lord Muruga at Swami Malai, near Kumbakonam, in Tamil Nadu.

Star Kettai, also known as Jyestha Nakshatra, is said to be related to Srishti Ganapati.

Srishti Ganapati is a kind and considerate aspect of the Lord. As one who gave up one of his own tusks and hence, is appearing only with the other, he is thus believed to be assuring his devotees of his selfless love for them and his readiness for any sacrifice for their welfare. Devotees also believe that his worship would bestow them with good clarity of thoughts and sound sense of discrimination.

Chanting the Srishti Ganapati mantra with faith can be an effective means of propitiating the mighty Lord, describes his form in detail, hails him as ‘Ganapati, the creator,’ seeks his blessings and prays for his grace.

The mantra, which reads as under in Sanskrit,