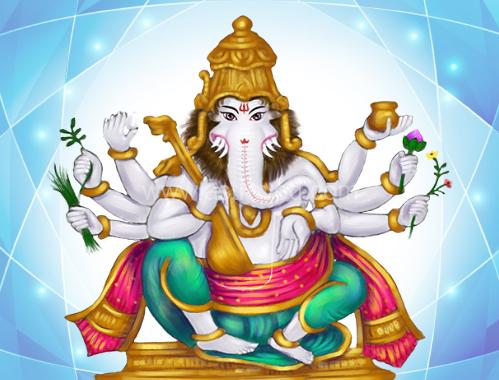 Simha Ganapati is regarded as the 29th among the 32 different forms of Ganapati. ‘Simha’ means a lion and the Lord seated on this magnificent animal is called as ‘Simha Ganapati.’ In this form, Ganesha rides on a mighty, fearless and formidable lion, and thus transmits power and confidence to the devotees. He is fair-complexioned and unique, having eight hands, and holding the stringed instrument Veena, a sprig of the wish-fulfilling divine tree Kalpa Vriksha, a blossoming lotus, a bouquet of flowers, a pot of jewels known as Ratna Kumbha and a discus in six of them. While he is holding the boon-granting Varada mudra in his main right hand, his principal left hand sports Abhaya mudra, offering protection to the devotees. In some cases, he is also depicted as having a composite face of a lion and an elephant and holding a mini-icon of the lion in one of his hands.

While this form is worshipped at many places, this Lord can be seen in the idol form in the temple at Pandharpur, near the town of Sholapur in the state of Maharashtra. The star Sadhayam, also known as Shatabhisha Nakshatra, is said to be related to Simha Ganapati.

Simha Ganapati is a potent aspect of the Lord, and is believed to provide the devotees with good strength to fight negative forces and evil, offer protection to them against all hazards and inimical elements, bestow them with success and make them victorious.

The mantra, which reads as under in Sanskrit, describes his wonderful form, sings his glory, seeks his blessings and prays to the Lord seeking protection from dangers and adversities.

Chanting the Simha Ganapati mantra with faith, can be an effective means of propitiating the powerful Lord.