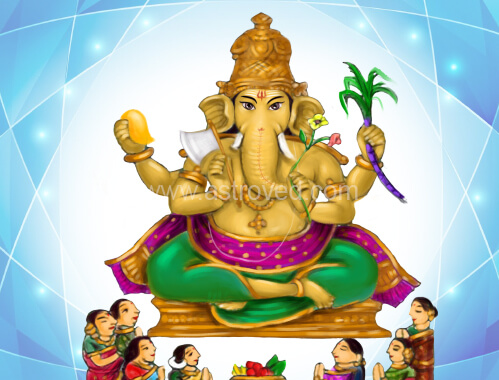 Siddhi Ganapati is regarded as the 7th among the 32 different forms of Ganapati. The Sanskrit word ‘Siddhi’ means success, attainment or accomplishment. Hence, Siddhi Ganapati is regarded as the Lord of success and accomplishment and also, as an embodiment of masterly intellect. This Lord is sitting in a relaxed posture, golden yellow in complexion and possesses four hands. While his two right hands hold the battle ax and the mango fruit, his left ones hold a bouquet of flowers and a sugarcane plant complete with leaves and roots. His trunk is curled to the left, in which he holds a sweet cake made of sesame seeds and jaggery (cane sugar).

This form of Ganesha can be seen as a painting in the Pazhavangadi Ganapati Temple in the Kerala capital Thiruvananthapuram and as a sculpture in some temples in Mysore region, where all the 32 Ganapati forms are on display. Siddhi Ganapati can also be worshipped in an idol form, in the famous Siddhi Vinayak Temple in the city of Mumbai, where the temple is exclusively dedicated to this Lord. Bharani Star or Nakshatra is said to be related to this form of Ganapati.

Siddhi Ganapati is the one can bless anyone with success in any right venture he or she undertakes. He is also believed to be the storehouse of Ashta Siddhis, the 8 rare and matchless universal attainments and can bless devotees with the power to succeed in endeavors and life.

The mantra, which reads as under in Sanskrit, calls him as ‘the success-bestowing Ganapati,’ describes his form in detail and prays for his grace and blessings.

Chanting the Siddhi Ganapati Mantra with faith can be an effective means of propitiating this powerful Lord.