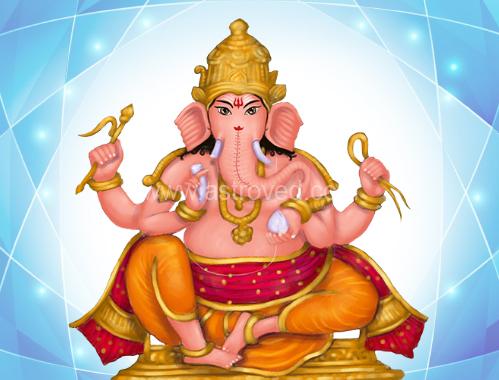 Runa Vimochana Ganapati is regarded as the 25th among the 32 different forms of Ganapati. The word ‘Runa’ or ‘Rina’ means ‘debt,’ and ‘Mochana’ is ‘getting relieved from.’ Runa Vimochana Ganapati thus denotes the merciful Lord, who helps to mitigate the devotees’ debts – both worldly debts and also the Karmic debts. Thus the grace of this Lord can help to overcome sins, guilt and worldly bondages, and show the way to salvation. He is also referred to as Rinamochaka, which also means the same. He is normally depicted as a crystal image, smooth, pure and milky white in complexion, and dressed in red silk. He has four arms, in which he holds his broken tusk, a goad, a noose and a rose apple, his favorite fruit.

This form of Ganesha can be seen as a painting in the Kerala capital Thiruvananthapuram and as a sculpture in some temples in Mysore region, where all the 32 Ganapati forms are on display. However, as an idol form, the Lord can be worshipped in the Kapileshwar temple, on the banks of the sacred tank Kapila Theertham, at the foothills of the holy Tirupati Mountains, in the state of Andhra Pradesh.

Pooradam star, also known as Purvashada Nakshatra, is said to be related to Runa Vimochana Ganapati.

Runa Vimochana Ganapati is a compassionate aspect of the Lord, whose worship, is believed to bestow the devotees with the power to overcome difficulties and march in the path of success.

This mantra describes his form in great detail, sings his glory, seeks his blessings and prays for relief from all forms of debts.

The mantra, which reads as under in Sanskrit,

Chanting the Runa Vimochana Ganapati mantra with faith, can be an effective means of propitiating the powerful Lord.