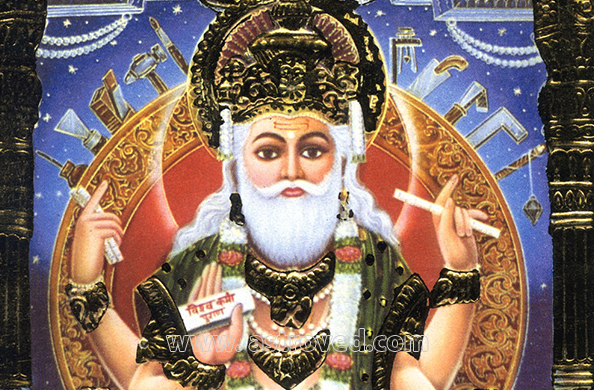 Vishwakarma is the divine craftsman, a celestial engineer, a brilliant designer and an exceptional constructor. It is said that he is the source of all creativity, especially, artistic creativity, which then gets transmitted to the human consciousness. He is also regarded as the creator of Sthapathya Veda, the ancient text or Veda of architecture.

He is Vishwa Karma, the all-accomplishing entity. As per the ancient Rig Veda, Vishwakarma has eyes, mouth, arms, and feet on all sides. However, he is generally portrayed as a mature individual with four hands, seated on a grand throne and adorned with a crown and ornaments. He is reddish in complexion and holds a water vessel, a text, a noose and an apparatus in his hands. In some depictions, he is also seen sitting on his mount, the white swan, similar to Lord Brahma.

Mythology associates all exceptional constructions with Vishwakarma and treats him virtually as being beyond time. Hence, he appears in several Yugas (epochs) and in many epics and narratives. He is said considered as the one who designed and created the entire universe including our mother earth. His other creations include Indralok (the heavens during Sat Yuga), Sone Ki Lanka (Ravana’s magnificent capital Lanka in the midst of the ocean during Treta Yuga), the majestic coastal town of Dwaraka (the capital of Lord Krishna) and the grand Hastinapura and Indraprastha (capital cities of both the warring cousins, the Kauravas and the Pandavas, during Dwapara Yuga). He is also believed to have designed the palaces for all the Gods and the Devas, their chariots, weapons, as well as their brilliant ornaments. The credit of designing and fabricating the immensely powerful Vajra Ayudha, the mighty weapon of Lord Indra, made out of the backbone of sage Dadhichi, also goes to this divine artisan.

Vedas also regard him as the father of five great sages, each of whom remained pioneer of an art. These sons were considered the first skill workers in different fields like the woodwork, metalwork, goldsmith, bricklayer, and author.

Vishwakarma is worshipped with fervor by all those associated with any form of construction activities, like designing, engineering, and architecture. It is believed that the Lord shall bless the sincere devotees and impart them with the essence of this great science. His blessings shall increase the creative instincts and the skill in them, and help them to move to greater heights in their chosen activities.

Vishwakarma Jayanthi is regarded as the birth anniversary of Lord Vishwakarma and is celebrated with enthusiasm by skilled workers, craftsmen, and artisans all over the country. Also called as Vishwakarma Pooja, this is observed on the last day of the Bengali month of Bhadra and usually falls on the 16th or 17th of September. Special worships are organized on the occasion, especially in offices and factories, when offerings are made to the images of Vishwakarma, hymns in his praise are chanted, prayers are done, and Aarti (light offering) is shown. This Pooja is also dedicated to instruments and machines in use.