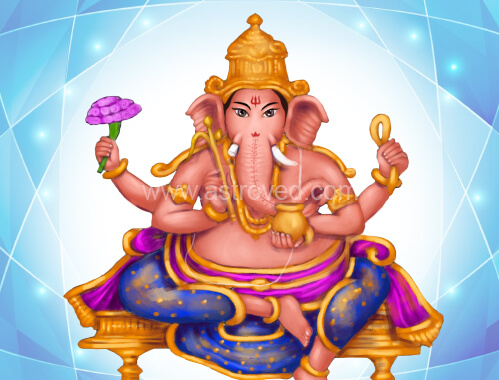 Kshipra Ganapati is regarded as the 10th among the 32 different forms and Kshipra Ganapati. The Sanskrit word ‘Kshipra’ denotes quickness and immediacy. True to his name Kshipra Ganapati, this Lord is regarded as the one who answers prayers, rewards true devotion and satisfies the devotees, immediately. He is red in complexion, has four hands, and holds in the main right arm, his own broken tusk. His other hands are having in them, a sprig of the wish-fulfilling tree Kalpa Vriksha, a noose, and an elephant goad. His trunk forms a fine curl at its end, and holds in it, a pot of jewels or precious stones, known as Ratna Kumbha.

Kshipra Ganapati is a kind and responsive aspect of Lord Ganesha, who comes to the devotees’ aid at once. His worship is believed to bestow people with sound knowledge, long life, and fulfillment of honest wishes.

This mantra hails this Lord as ‘the Ganapati who acts speedily’, describes his form and prays for his grace and blessings.

Chanting the Kshipra Ganapati mantra with faith, can be an effective means of propitiating this powerful Lord.