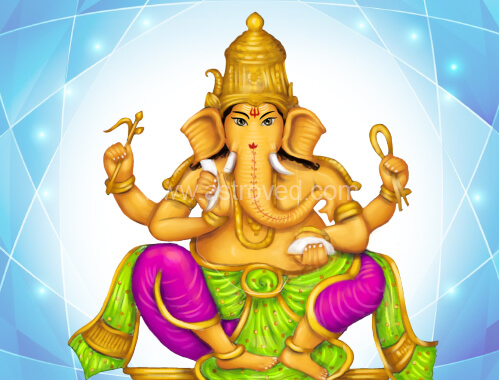 Ganapati or Ganesha is the son of Lord Shiva and Goddess Parvati. He is hailed as a remover of obstacles and a harbinger of success and is both loved and venerated. He has an elephant face, but also has a primordial form with a human head. He is celebrated as a hero of strength, as a happy dancer, as a sweet child and many more. It is considered a good custom to seek his blessings while starting any endeavor or undertaking any venture. Ganapati veneration is done from very ancient times, and Gaanapatyam, the Ganapati worship, has been established by Saint Adi Shankara, as one of the six fundamental forms of worship in Hindu religion.

Haridra Ganapati is regarded as the 21st among the 32 different forms of Ganapati. This form is considered unique as his image is made out of turmeric. This gives Haridra Ganapati, a bright, golden complexion. He also adorns himself with yellow clothes and sits with aplomb on a royal throne. He has four hands, holding in them his own broken tusk, an elephant goad, a noose, and his favorite snack, the sweet Modak (dumpling). Devotees believe that with the help of the noose, the Lord would hold them close to him and make them progress in life with his goad.

While all the 32 Ganapati forms are available as sculptures in the temples at Chamarajanagar and Nanjangud in the Mysore district of Karnataka, Haridra Ganapati himself is enshrined in the Sage Rishyasringa temple in Sringeri in the same state, where he can be worshipped. This Ganapati is said to be associated with Vishaka Nakshatra, the star Visakam.

Turmeric is an auspicious substance, with enormous medicinal value. Hence, it is believed that installing the turmeric-made idol of Haridra Ganapati at home for worship would bestow good health, wealth and success. Offering prayers to him shall also help in the fulfillment of the earnest desires.

This is the mantra dedicated to Haridra Ganapati, which describes the form of this ‘golden-colored Ganapati’ and seeks his divine grace.

It is believed that chanting this hymn with faith can propitiate this Lord and earn his full blessings for the devotees.