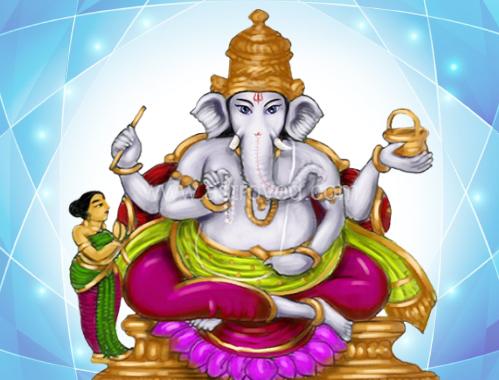 Dwija Ganapati is regarded as the 6th form among the 32 different forms of Ganapati. The word ‘Dwija’ is a combination of two terms ‘Dwi’, denoting the number two and ‘Ja’, an abbreviation of ‘Janma’, which means birth. Thus ‘Dwija’ simply means ‘twice born’. Normally this word is used to refer to Brahmins, for whom, normal birth is regarded as the first birth and the wearing of the ‘sacred thread’ and obtaining the right to perform the holy rituals as the second. However, Dwija Ganapati is regarded as a Lord equivalent to Brahma, the God of creation. This Ganesha is also similar to Brahma in appearance, pure white in color, and with four heads and the same number of hands. He holds in his hands, the japa mala made of Rudhraksha beads, a Kamandalam (water vessel), a dhandam (an ascetic’s staff) and an ancient work or scripture made of ole leaves.

This form of Ganesha can be seen as a painting in the Pazhavangadi Ganapati Temple in the Kerala capital Thiruvananthapuram and as a sculpture in some temples in Mysore region, where all the 32 Ganapati forms are on display. Ballaleshwar Temple in Pali, Maharashtra remains perhaps as the most famous shrine of Dwija Ganapati. This is also one of the eight well-known Ashta Vinayak temples in Maharashtra. Ashwini Star or Nakshatra is said to be related to this form of Ganapati.

Dwija Ganapati is regarded as that aspect of Ganesha who is capable of making one’s worldly life worthwhile. It is believed that worshipping him with faith can make people attain status, and earn good name and fame in their place of work and society. He can also help to bring down debts and to make people get good material gains.

The mantra, which reads as under in Sanskrit, describes the form of this ‘Twice-born Ganapati’ in detail and prays for his grace and blessings.

Chanting the Dwija Ganapati mantra with faith, can be an effective means of propitiating this powerful Lord.