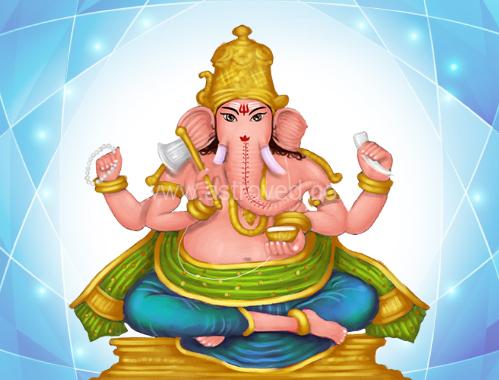 Dhundi Ganapati is regarded as the 26th among the 32 different forms of Ganapati. This Ganapati shows the path to moksha, the ultimate liberation and he is believed to do this by helping the devotees excel in spiritual studies. He can also rejuvenate their lives and make those illustrious.

Lord Dhundi Ganapati has a red-complexion and possesses four-hands, in which he holds a broken tusk, an ax, a mala of Rudraksha beads and Ratna Kumbha, the pot of precious stones. It is believed that the Ratna Kumbha represents the invaluable element of supreme consciousness, and also denotes the Lord’s resolve to protect his ardent and faithful devotees.

Dhundi Ganapati shrine is located in the Sri Chottanikkara Bhagavati Amman temple in Kerala, where devotees offer worship to him. This Ganapati is also said to be associated with Uttarashada Nakshatra, the star Uttaradam.

Ganapati is a remover of obstacles, but Dhundi Ganapati is believed to perform this act particularly in respect of impediments that arise in the path towards spiritual advancement. Thus this form of Ganesha is a devotee’s unfailing spiritual guide

The following is the mantra dedicated to Lord Dhundi Ganapati :

This hymn describes this form of Ganapati, as the red-complexioned Lord, who holds a broken tusk, an ax, beads of Rudraksha and a pot of gems; hails him as Vignaraja, the destroyer of obstacles and the provider of happiness; and seeks his divine grace.

It is believed that devotees can recite this hymn with faith and receive the blessings of the Lord in full measure.