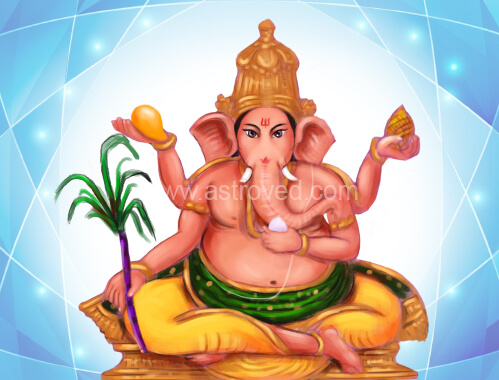 Bala Ganapati is regarded as the 1st among the 32 different forms of Ganapati. The word ‘Bala’ refers to a baby or a child. Bala Ganapati is thus a child-like form of Lord Ganesha. He is generally depicted as a slightly grown up child, sitting with ease, but is also shown sometimes as a cute baby crawling on his little legs or simply sleeping. This divine child is red in complexion like a rising Sun and his color is said to represent a plentiful harvest on earth. Adorned with a garland of tender flowers, this Lord has four hands, and holds in them healthy and natural edible items like a mango fruit, a banana, a jack fruit and sugarcane. His trunk is also shown holding a Modak, his favorite sweet dumpling.

This form of Ganesha can be seen as a painting in the Ganapati Temple in the Kerala capital Thiruvananthapuram and as a sculpture in some temples in Mysore region, where all the 32 Ganapati forms are on display. The oldest and the most well-known shrine of Bala Ganapati is believed to exist in the famous Lord Nataraja temple in Chidambaram, in Tamil Nadu.

In the Bala Ganapati form, Lord Ganesha appears as a loveable child and is regarded to be representing one of the five important primordial elements - Pritvi, the earth. The Lord is thus believed to signify the fertility of earth and abundance of agricultural and other produce.

Devotees believe that Bala Ganapati is easily approachable and that his worship would bestow various benefits like growth of sound intelligence and good habits in children, improved health and overall happiness in life.

The mantra, which reads as under in Sanskrit, salutes Bala Ganapati, the child-God, ‘who radiates light like a rising Sun’, describes his appearance and prays for his blessings and grace.

Chanting the Bala Ganapati mantra with faith, can be an effective way of propitiating this child-Lord.