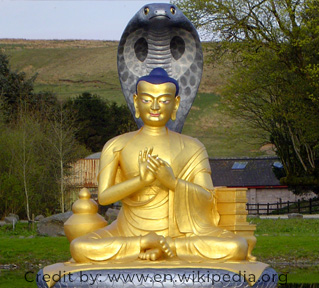 Sage Nagarjuna is one of the greatest saints of Buddhism, some people regard him as the second Buddha by the Mahayana traditions of Buddhism. The word Naga denotes the serpent. He is generally portrayed in a sitting posture, with the coiled serpent as his canopy. Sage Nagarjuna is a great philosopher, alchemist, and one of the greatest Sages of India.

He gave sharp criticisms on Brahminical and Buddhist substantial philosophy to a large extent. He was supporting the theory of knowledge and approaches to the practice of both Buddhism and the orthodox Brahminical approach. His iconic portrayal of “emptiness”, and “middle way”, gave rise to a new school of thought. Historians regard him as an icon, who changed the entire course of history.

There are two versions about the birth and life of this sage. One is in the Chinese version, and the other one is in the Tibetian version. He was born in a Hindu Brahmin family, in Andrapradesh during the reign of the Satvahana dynasty of Gautamiputra Satakarni. His education at the Nalanda University, which is in Bihar, made him follow Buddhism. It is believed that the health of this sage was not good during his early years, and only when he started his life in Nalanda University, his health regained.

When he performed severe austerities, he gained an invitation from the world of Serpents. He then discovered the path of enlightenment, and gave the world his “Prajnaparamita Sutras”. After he returned to this world from the “land of serpents”, he was renamed as Nagarjuna, the "noble serpent."

Sage Nagarjuna contributed his works in the Sanskrit language, where he composed “Sutras”, and hymns which propagate the man’s connection with the divine source. Much like Gautama Buddha his doctrines were simple, philosophical, and to a large extent covered a lot of surreal connection of man and his ideologies.

His focus was to deconstruct all systems of thought, which evaluated the world in terms of fixed substances and essences. According to him, all things in this world varies, and one thing will transform into another, based on the energy, time and matter. He also named his philosophies as “Sunya”.

Sunyatasaptati, a great literary work of him, spoke on the philosophy of“Emptiness” which also attributes to voidness and nonexistence. His debates were very much with the Brahminical School of Thought, where he emphasized more on the growing Mahayana Buddhism, which is called as the new Vehicle. His work “Mulamadhyamakakarika”, spoke about the middle way of life. His verses “Yuktisastika”, gave verses on reasoning.

He is one of the great mystics, whose proportions of life was unfathomable. His concept of “Two Truth”, was the fundamental reason for the rise of Mahayana Buddhism. There can be two truths, the relative truth, and the absolute truth. He has visited several temples in South India. Regarded as ‘Medicine Buddha”, in many Buddhist monasteries, he is placed along with Lord Buddha . He was also well versed in Ayurveda