6 Things That Takes You Close to Lord Ganesha

Latest Articles
Join Us On Our Telegram Channel - AstroVed
Left Eye Blinking for Female Astrology Meaning: Find Out If It's a Good Omen or Bad One
Sudarshana Chakra - 20 Interesting Facts
Saturn Transit 2022 to 2025 in Aquarius and Effects on 12 Zodiac Signs
Meaning and importance of Gupt Navratri

6 Things That Takes You Close to Lord Ganesha

Lord Ganesha is the God of wisdom, success and prosperity. He is the remover of all kinds of obstacles. According to Rigveda,“Na Kritey Twayam Kriyate Kim Chanare” i.e no work begins without the blessing of lord Ganesha. 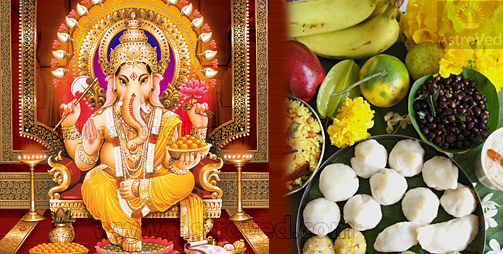 The benevolent lord is always ready to help those who seek his blessings earnestly. To appease the elephant-headed lord, one needs to know what he likes the most. Following are the 6 things liked by Ganesha.

Lord Ganesha is also called ‘Modakpriya’, which means one who loves modaks. Modak is a sweet dumpling made of rice flour, stuffed with grated coconut and jaggery. It is said that worship of Ganesha is incomplete without modaks. https://www.youtube.com/watch?v=c1Po4Fsi69A Why Ganesha loves Modaks? Once demi gods came to meet lord Shiva and Parvati, they presented a special modak to the divine couple. (The one who eats the modak will have command over scriptures, art and writing). Goddess Parvati wanted to distribute the Modak among her sons, lord Ganesha and lord Karthik. But the brothers were not willing to share it. So Goddess Parvati said the one who encircles the world three times first, will get the modak. Karthik immediately mounted on his vehicle, peacock following his mother’s instruction. Lord Ganesha just went around his parents three times as he considered his divine parents, represent the entire world to him. His sincerity and wisdom won him the special modak. Since then modak is a favorite sweet of lord Ganesha.

The grass with three blades is offered to Lord Ganesha. Dhruv grass has the highest ability to attract Ganesha’s energy. Legend associated with Dhruva grass In the abode of Yama, the God of Dharma and Death, there was a demon named Anlasura. He was so terrible that even the gods were frightened of him. Indra tried many tactics to control him but Anlasura would always find a way to defeat Indra's attempts. The Gods then appealed to Lord Shiva to intervene. Shiva called his son Ganesha who was playing nearby and asked him to go and defeat the demon. Ganesha agreed and immediately set out to find Analsura.

Analasura laughed when he saw a chubby little boy with elephant head has come to fight with him. The smiling Ganesha began to grow in size and soon assumed his universal form and swallowed Analsura. Immediately after, Ganesha's stomach began to burn. Indra gave Ganesha the Moon to wear on his forehead, Lord Vishnu gave his lotus, Lord Varuna showered plenty of water, Lord Shiva tied a thousand-headed serpent around his tummy but nothing could comfort Ganesha. Then a group of sages came and they offered 21 blades of Dhurva grass to him. As soon as he ate them, the burning in his stomach subsided. Ganesha said henceforth devotees worshiping me with Dhurva grass will receive my benevolence.

Did u Know- Durva grass is used as a cure for indigestion in Ayurveda.

Erukku flowers have the ability to remove negativity from the body and mind of a person. Offerings garland made of erukku flower to Ganesha blesses a devotee with a healthy life, free from ailments.

Shankh or conch is an integral part of Hindu socio-religious culture. The sound of shankh awakens holy and pure devotion for the lord. Ganesha holds a shankh in one of his hands. Blowing of conch is auspicious for Ganesha pooja.

Although any seasonal fruit can be offered to Ganesha, but the elephant-headed God loves to eat banana and also loves the banana leaves. That is why the idol is often decorated with banana leaves.

Lord Ganesha has a fetish for yellow motichur ladoos, made of gram flour. Ladoos represent wealth and prosperity. In all his idols and images, Ganesha is shown holding a bowl of ladoos in his left hand. Offer your beloved Ganesha his favorite things on his birthday on September 9th, i.e. Ganesha Chaturthi and get blessed with wealth, happiness, prosperity, joy and knowledge. Read our related articles Life Lessons from the Elephant God