Shree Siddhivinayak Temple is a sacred Hindu shrine dedicated to Lord Ganesha, the first to be worshipped before beginning any new task or venture. It is one of the richest temples of India and is situated at Prabhadevi, Mumbai.

Siddhivinayak is well known as "Navasacha Ganapati" or "Navasala Pavanara Ganapati" among devotees, which in Marathi means “Ganapati grants a wish whenever prayed with genuine devotion”. The elephant-faced beloved Lord grants his devotees with their desires. This is one of the main reasons why renowned people, including politicians and celebrities like Aishwarya Rai, Amitabh Bachchan, Sachin Tendulkar and Bal Thackeray, regularly visit the temple. 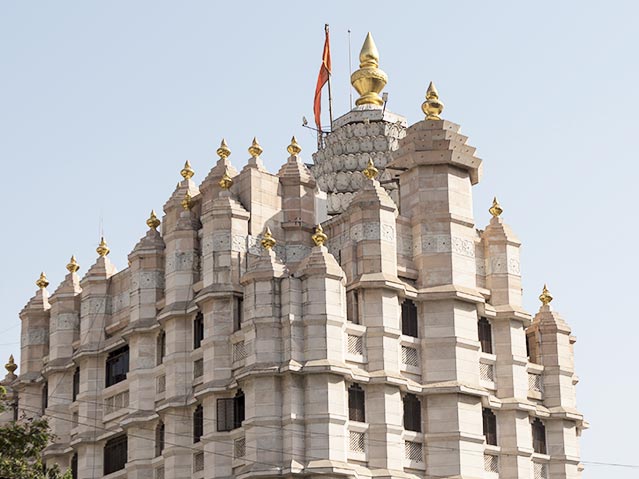 According to historical records, the temple was believed to be inaugurated on 19th Nov 1801 as a small 3.6 x 3.6 m2 square brick structure with a dome-shaped brick Shikhara (Spire) on the top. The temple was built by a contractor Laxman Vithu Patil and was funded by a rich woman named Deubai Patil.

It is believed that Ramakrishna Jambhekar Maharaj, a believer of the Hindu saint Akkalkot Swami Samarth, buried two divine idols in the front of the presiding deity of the temple on the orders from his guru. As predicted by Swami Samarth, after 21 years from the burial of the icons, a Mandar tree grew at that spot with a Svayambhu (self-manifested) Ganesha in its branches.

In 1952, a small Hanuman temple was sanctified within the temple complex, whose idol was unearthed during a road extension project.

The current structure of Siddhivinayak Temple evolved from a small place into a huge temple during the latter half of the 20th century. The temple is visited by many celebrities from media and politics. In 2016, Apple CEO Tim Cook began his India trip with morning prayers at the temple.

It is widely believed that anyone who prays to the Lord with devotion and pure heart will get their wishes fulfilled. As one of the richest temples of the country, the temple receives ample benefaction from businessmen, politicians and Bollywood film stars. Siddhivinayak Temple also conducts social and cultural activities for the welfare of the society such as Dialysis Centre which conducts blood and health camps and provides free eye checkups.

Siddhivinayak temple is a six-storied building with multi-angular structure. The central Shikara or spire is gold plated while the other spires are plated with Panchadaatu or five metals – Gold, Silver, Copper, Bronze and Brass. The second floor of the temple complex houses the temple kitchen and the fourth floor contains a library of over 8000 books on religion, science and philosophy.

The presiding deity of the temple is a Svayambu and was carved out of a single black stone and is 2'6" (750mm) high and 2' (600mm) wide with the trunk on the right. The idol of Siddhivinayak has four hands upper right hand holds a lotus and upper left hand holds an axe. The lower right hand has a chain of sacred beads and the lower left hand holds a bowl of Modaks (dumplings). On Lord Ganesha’s forehead, one can find the third eye of Lord Shiva. The idol is flanked by Goddesses Riddhi and Siddhi who represent prosperity, richness, and contentment, serenity and sanctity.

Ganesh Chaturthi – is celebrated as a grand festival dedicated to Lord Ganesh during Aug- Sep. The festivities last for ten days and ends on Ananda Chaturdashi, the tenth day. A giant clay idol, painted with brilliant colors is made 2-3 months in advance and is placed on a giant plinth at the temple and elaborately decorated with garlands. This ritual is known as ‘Pranaprathishta Pooja’.

The huge idol of the elephant-faced lord is worshipped ardently by singing hymns and songs in praise of the God and special Poojas are conducted. Lakhs of pilgrims flock the temple to appease Lord Ganesha and receive his eternal blessings. Offerings like sweets, coconut, jaggery and Ganesha’s favorite Modaks (dumplings) are made to the Lord and distributed to the devotees after daily Pooja gets over. On the eleventh day, the idol is taken as a grand public procession amid singing and dancing and is then immersed in the sea, when the Lord is believed to reach Kailash.

Sankashti Chaturthi – is an extremely sacred day to worship Lord Ganesha and is fervidly celebrated by his devotees on the fourth day of the Krishna Paksha (Waning Phase of Moon) every month. The importance of this day is highlighted in Vedic scriptures such as Bhavishya Purana and Narasimha Purana. It is widely believed that offering special Poojas to the Lord on this day removes obstacles from one’s life and awards success in every effort.

Hanuman Jayanti – is the birthday of Lord Hanuman which is celebrated in the month of Chaitra (Mar – Apr) in Maharashtra. As it is believed that the Lord was born during sunrise, special Poojas and rituals are offered to Hanuman from dawn to dusk.

Akshaya Tritiya – is an auspicious day celebrated in the May, when Lord Ganesha is worshipped with special rituals and the benefits of performing fire rituals on this day is believed to increase multifold for the devotee.

‘Vinayaka’ in Sanskrit means ‘the one who destroys sins and evil forces’. Worshipping Siddhivinayak in his holy shrine blesses one with immense health, wealth and prosperity. Ganesha is the primary deity to be worshipped before beginning any task and it is the surefire way to victory.

How to reach Siddhivinayak Temple

By Air: The nearest airport is Chattrapati Shivaji Airport which is 15 km away and one can reach the temple from the airport by hiring a cab. The airport is connected to all major cities in India.

By Road: The city of Mumbai is connected to all major nearby cities like Panaji, Pune, Thane, Bengaluru, Ahmedabad, and Surat via wide national highways. Government and private buses are available in and out of the city.