Introduction about the Ranakpur Jain Temple

The Ranakpur Jain temple is one of the major pilgrimage centers for the Jain community of India. It is dedicated to Tirthankara Rishabhanatha and located in the village of Ranakpur in the Indian state of Rajasthan. It is about 95 km away from Udaipur and renowned for being the largest and most important temples of Jainism. The complex houses several temples including a Chaumukha temple, Parsavanath temple, Amba Mata Temple and Surya Temple. 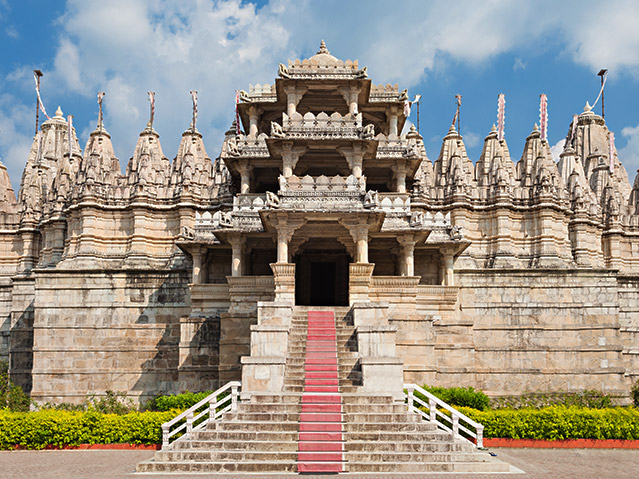 The Chaumukha temple is revered as the most important since it houses the image of Lord Adinath, the first 'Tirthankara' of the Jains. This magnificent temple is built of pristine white marble and nestled amidst a lush green tropical rainforest. It is a much sought after destination of pilgrims and visitors from across the wide expanse of the globe, who come not only to worship, but also to admire its architectural resplendence.

History of the Ranakpur Jain Temple

The construction of the temple is believed to have commenced in 1437 A.D by Dhanna Singh, a member of the influential Porwal Jain community. The shrine was built with the patronage of Rana Kumbha, the ruler of Mewar at that point of time. The design and style was provided by Deepaka, a prominent architect of that period. An inscription on a pillar near the main shrine backs up this theory and it was reportedly started under the guidance of Dharanka, a devoted Jain.

A ceremony was held by Acharya Soma Sundar Suri when the ground floor was completed and the structure was finished only in 1458 A.D. Several renovation works were carried out from time to time with many influential families contributing to its cause. The Anandji Kalyanji Pedhi trust was entrusted with the management of the shrine in the past century.

Significance of the Ranakpur Jain Temple

A stunning feature of the temple is the columns which reportedly change color from golden to pale blue after every hour during daytime and the Mandap has two gigantic bells which produce a harmonious melodic sound which resonates though the complex. The design of the Chaumukha temple is in the shape of a celestial Aircraft (Vimana) and this very facet was a staggering 65 years in the making. The Parsvanath temple, also known as Patriyon Ka Mandir, inside the complex was built in the 15th century and fabled for the engraved windows decorated with Jain figures. The shrines of Neminath-the 22nd saint of Jainism and Surya Narayan are located in the close vicinity.

Architecture of the Ranakpur Jain Temple

Critically acclaimed as masterpieces of architectural style and brilliance across the world, the Ranakpur temples are renowned for their elaborate and intricate construction style. The splendid design is a significant feature of the temple complex and many are taken aback with its brilliant craftsmanship. A vast basement area of 48,000 sq. feet is a defining feature of the structure, and there are around 1,400 pillars supporting the temple. The shrine is entirely constructed of light colored marble which lends it a rich and elegant look.

Four different doorways lead to the interior chambers which take you to the main hall where the charming image of Lord Adinath is installed. Several small shrines and domes surround the image, with five spires which rise majestically above the roof of the temple. There are also around 20 cupolas rising from the pillared hall. The ceilings are decorated with intricate foliate scrollwork and elaborate geometric patterns. The defining glory of this incredible shrine is the engraved motifs of beautiful nymphs playing the flute and depicted in several different postures. All these are beautifully carved and stand at an amazing height of 45 feet from ground level, with no two motifs being the same.

Location – How to reach the Ranakpur Jain Temple

The Ranakpur Jain Temple is renowned for its magnificent façade and brilliant design. It is considered a masterpiece of architecture and attracts visitors from all over the globe. Ranakpur is easily accessible by various modes of transport and well connected to the rest of the country.

By Air: The nearest Airport is in the city of Udaipur, some, 60 km away from the temple.

By Train: The city of Udaipur is also well connected by rail to major destinations in the country.

By Bus: State transport and private buses operate with regular frequency from the city of Udaipur to the temple.