Shreemanth Dagadusheth Halwai Ganapathi Temple is one of the richest temples of the state of Maharashtra. It is dedicated to the elephant faced God Ganapathi, who is worshipped with great devotion in the state. This temple is more than a century old and is located in the city of Pune. 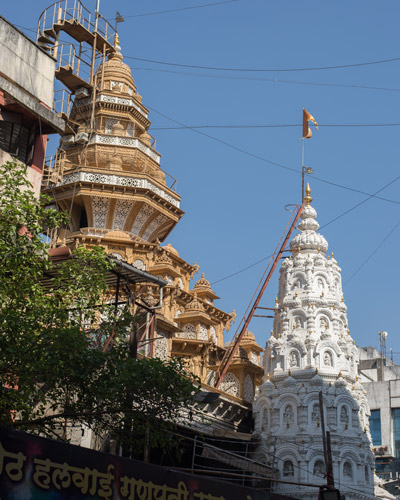 This temple bears a strange name and there lies its interesting history. Halwai is a Marathi word for the sweet maker or vendor. As this temple was actually built by a Halwai, it came to be referred to by the same name. Dagadusheth Gadve belonged to the sect of Lingayats and hailed from the state of Karnataka. Preparing and selling of sweetmeats was his profession, and he made handsome money and earned a good name as Halwai, which itself became his surname later. Subsequently this rich businessman shifted and settled in Pune city. But tragedy struck Dagadusheth Halwai in the late 19th century, when he lost his only son to the plague epidemic. The businessman and his wife became disconsolate and sunk into depression. It was then that Madhavnath Maharaj, their Guru advised them to take refuge in God and construct a temple for Lord Ganesh. Thus, this beautiful temple began to be built and got completed in 1893.

This temple also remains one of historical importance. Lokamanya Balagangadhar Tilak, the well-known nationalist leader and freedom fighter, remained a close friend of the builder of this temple. Once, he visited the temple and was impressed, both by its construction and also by the dedication and commitment of his friend. Suddenly, the idea of celebrating Ganesh Chaturthi as a public festival and using it for spreading the message of freedom among the people and making them rise against the British rulers, struck him. Thus, the grand annual event of Sarvajanik Ganeshothsav was born in Dagadusheth Halwai Ganapathi Temple and that is being continued all over the state of Maharashtra and also in many parts of the country, even today.

This temple is a simple but remarkably well-built structure. It is so designed that the main idol of Ganapathi as also the rituals of worship done to him can very well be seen from outside. The sanctum is guarded by the impressive marble statues of sentinels Jay and Vijay. Inside the sanctorum, the wonderful image of the Lord can be worshipped. He is four armed and is seen in a seated position. While he holds flowers in his upper hands, his lower ones are in the protective abhaya mudra and the boon-giving varadha mudra postures. His head is adorned with a golden crown and his body, with an armour of the same yellow metal. He looks dazzling, well decorated with many gold ornaments, which are said to weigh nearly 40 kgs.

Daily pujas are conducted for Lord Ganapathi which include abhisheka, the sacred bath and aarti. Devotees in very large numbers pour in here, praying to the Lord and seeking his blessings. They include celebrities, politicians and ministers. They also make generous offerings of gold and cash to him. It is also a practice to offer him coconuts, which are received in big heaps here. Ganesh Chaturthi is celebrated with fanfare here, when the temple looks grand with special lighting. Religious activities like recitation of scriptures and singing of Bhajans, and cultural functions like music concerts are also held on special occasions. While the temple is celebrating the 125th year of its inception in 2017, the main idol of Ganesh here is said to be insured for a huge sum of Rs 1 crore.

Charitable Activities of the Temple Trust

It is the Shreemanth Dagadusheth Ganapathi Trust, which looks after the affairs of this wealthy temple. The trust also utilizes the donations and funds received from the devotees for undertaking a lot of philanthropic activities. Mention should be made in this regard about the old age home named Pitashree, which takes care of the aged, the housing and education facilities provided to poor children, and the medical and ambulance services extended to the tribal regions of the district.

Dagadusheth Halwai Ganapathi Temple is located in the Pune city itself which is very well connected by air, rail and road with all parts of the country.