The Sri Velleeswarar Temple is located in Mangadu, a suburb of Chennai. Mangadu derives its name from the earlier landscape, which was a vast mango forest. The temple is said to be 2,000 to 3,000 years old.

The temple is dedicated to Shiva and is spread over an area of more than two acres. It is one of the three main temples in Mangadu, the other two being the Sri Kamakshi Amman Temple and the Sri Vaikunta Perumal Temple. In this temple, Shiva is called Velleeswarar. 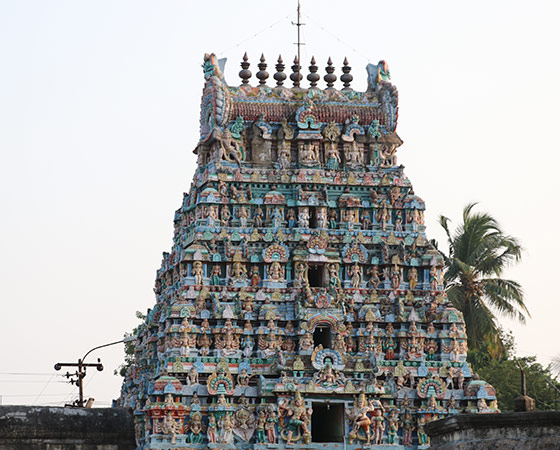 According to mythology, Sri Sukra, the planet Venus (called Vellee in Tamil), worshipped Shiva here. Sri Sukra is the Guru of the Asuras (demons). He was performing penance to recover his eye, which he had lost when he had blocked the offer of three feet of land by King Mahabali to Vishnu. Vishnu covered all the worlds in two feet, and for the third, King Mahabali offered his head as promised to Vishnu. Shiva, pleased with Sri Sukra’s devotion, finally restored his vision, and gave him Darshan (sacred vision).

Legend has it that Goddess Parvati once playfully closed Shiva’s eyes. The outcome was that all activities in the world came to a standstill. The Goddess was cursed by Shiva to come down to earth. She performed severe penance by standing on one leg amidst five types of fire, praying to Shiva to accept her back.

It is believed Shiva came down to earth to give her Darshan (sacred vision) here and then marry her. When Goddess Kamakshi came for Darshan of Shiva, she saw Sri Shukra worshipping Shiva. She did not want to disturb his penance and went away.

Shiva later directed Goddess Kamakshi to go to Kancheepuram and married her there. Since Sri Shukra worshipped Shiva, God came to be known as Velleeswarar, and as Sri Bhargaveswarar too. The temple is the Shukra Sthalam among the Navagraha temples (Thondai Mandalam).

Any devotee visiting the Sri Kamakshi Amman Temple should first visit the Sri Velleeswarar Temple and Sri Vaikunta Perumal Temple in Mangadu, as all three temples are associated with the history of Goddess Kamakshi.

The Sri Velleeswarar temple is ancient and beautiful. The temple belongs to the Pallava period. At the entrance to the temple is the Bali Peeta (sacrificial altar). There is a magnificent Nandi outside the sanctum, facing west.

One can enter the Maha Mantapa and have Darshan of Sri Velleeswarar or Sri Sukreswarar in the Lingam form. The Lingam is six feet tall and is mounted on a square Avudaiyar (receptacle). Shiva is found in this form in temples where Goddess Kamakshi resides. Sri Veerabhadrar has a separate shrine behind the sanctum. It is believed he was formed from the sweat of Shiva to defeat Daksha, the father-in-law of Shiva. Daksha with the head of a goat is seen in a worshipping posture near Sri Veerabhadrar.

There is no Goddess (Kamakshi) in this temple as she resides in a separate temple nearby. As she performed penance in this temple, her footprints are seen in a gated enclosure near the idol of Nandi.

As one goes further, there is an Artha Mandapam (central hall) where idols of Ganesha and Murugan are placed on either side of the entrance to the Garbhagriha. There are shrines for Utsava idols, Naalvar, Natarajar Sabha, Bhairavar, and Surya in the Artha Mandapam.

Ganesha gets special attention as he can be seen holding a mango fruit instead of the modak in the left lower hand, and he is called Mangani Vinayagar. He holds paddy stalks in his left upper hand and is praised as Nel Kadir Vinayaka. Farmers pray to Vinayaka and offer paddy and mango as Neivethanam (holy offering) so that they may have good crop yields. Vinayaka appears in another form in the Gostha with an umbrella and a fan (shamara) in his hand.

There are idols of Dakshinamoorthy, with Mulayagan, the symbol of ignorance beneath his feet. There is a beautiful Lingothbavar, and Goddess Durga, with a discus attributed to Vishnu, is a rare form, after the Chandikeswarar shrine. Here she is called Vishnu Durga. These idols are viewed as Kostha idols. There are also shrines for Kala Samhara Moorthy and Balambikai near the Durga and Chandikeswarar shrines.

Separate shrines for Sri Kasi Viswanatha and Sri Sundaresa with their consorts Goddess Visalakshi and Goddess Meenakshi, respectively, can be seen. The temple houses a separate shrine for the Navagrahas. The Vimana of the temple has sculptures of the deities facing all eight directions.

The Sthala Vriksham is a Mango tree. The Theertham is Chakra Theertham.

This temple is one among nine temples built for the Navagrahas (nine planets), where the main deity is Shiva. Sri Shukra offered prayers to Shiva and performed severe penance here.

Special prayers are offered to the deity on Fridays by devotees. Friday is dedicated to Venus (Sukra). It is very auspicious to observe fasting and offer pooja in this temple on Fridays as it is devoted to Goddess Shakti and Sri Sukra.

A special offering of white field beans (mochai) is made by the devotees. Abishekam is performed for the main deity. People light lamps in coconut shells.

People with impaired vision visit the temple and offer prayers to Sri Velleeswarar and Goddess Kamakshi to give them relief. Sri Shukra blesses devotees with wealth, prosperity, vehicles, and social status. He removes all predicaments in the lives of devotees.

The main festivals celebrated by the temple are Maha Shivratri in February-March, Tirukarthikai in November-December, and Arudra Darshan in December-January.

How to Reach Sri Velleeswarar Temple

The nearest railway station is the Guindy Railway Station located 14 kilometers away from the temple.

Mangadu Bus Stop is very close to the temple. There are frequent bus services from Poonamallee, Pallavaram, Porur, and Tambaram. Buses are plying from Egmore, Central Railway station, and Koyambedu.