The Veetrirundha Perumal temple is dedicated to Vishnu as the prime deity and is located in Thirumazhisai, a suburb of Chennai. The temple lies on the way between Poonamallee and Thiruvallur. This temple is considered unique as Maha Vishnu is seen in a rare sitting posture, with consorts on either side. The God is normally seen in a reclining position (as in Srirangam) or a standing posture (as in Tirupati). 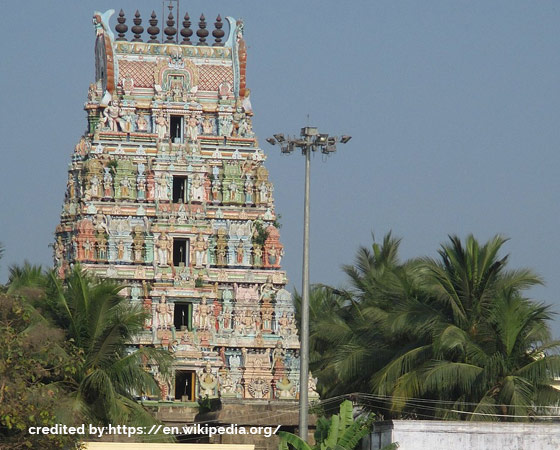 According to legend, the great sages Markandaya and Brighu performed Tapas in Puri. They longed for a divine vision of Vishnu. God appeared in a haze and half form. The sages yearned for a fuller vision, and Vishnu indicated that he would do so only in Maheesara Kshetram. The sages then prayed to Brahma, the God of Creation for clarity and to help them identify the place. Brahma later found out from Vishnu that the site could easily be identified as it would outweigh the rest of the world by just one grain of paddy. Brahma also realized that at this place, Vishnu would give darshan (sacred view) along with his consort, Sri Shenbagavalli.

Brahma located the site when he saw Vishnu in the sitting posture at Thirumazhisai. The location of the temple is where Brahma had a full darshan of Vishnu in his complete form and splendor. God indicates with his fingers that this Kshetram outweighs the rest of the world by one grain of paddy.

There is another legend that states at the beginning of Kali Yuga, Sri Venkatesa Perumal of Tirupati gave Brahma darshan in a sitting posture in this town. He has been showering blessings and benefits on his devotees who have a darshan of him there. Another legend has it that Sri Rama in his search for Sita Devi passed through the jungle and rested in this place.

There are rock inscriptions that show the temple was patronized by kings of the Chola dynasty. The palm leaves at the Saraswati Mahal Library in Thanjavur have references to this temple. The temple is believed to have been constructed around 850 A.D. by the Pallavas, during the reign of King Nandivarman III. Later, the temple underwent renovation during the reign of the Chola King Raja Raja Chola and by Krishnadevaraya in 1520.

It is believed that the temple was rebuilt on some older bricks, ruins of the original temple that survived the pre-Pallava period. This is one of the oldest temples in Tamil Nadu.

The temple faces east and has a five-tiered Rajagopuram. One can see the Bali Peedam and the Dwajasthambam immediately after the Rajagopuram. The presiding deity of Veetrirundha Perumal is housed in the main sanctum with his consorts Sridevi and Bhudevi. Vishnu grants darshan with the Ashtalakshmis - four Lakshmis on four sides of the crown, and Sridevi and Bhudevi on either side. The Divine Mother Shakti is called Shenbagavalli.

The deity holds the chakra in the right hand, and his feet are on the lotus, similar, to Tirupati. The niche idols around the sanctum include Varadaraja Perumal, Vishvaksena, Kakkaathar, and Vaishnavi. There is a separate shrine for Thirumazhisai Alwar, one of the twelve Alwars of the Vaishnavite tradition. He is considered to be an incarnation of the Sudarshana, the Chakra of Vishnu.

Adjacent to the main shrine housing the presiding deity is a separate shrine for Sri Vinaya Anjaneya Swamy that faces the north. He is called Varahamukha. At the entrance to the main temple is an Archa Vigraha of Sri Anjaneya Swamy carrying the Sanjeevi Parvat.

The temple also has shrines for Chakkarathazhwar, Lakshmi Narasimhar, Andal, Vedanta Desikar, Thirumazhisai Piran, and Alwars in the prakaram (corridor). The temple has a spacious Mandapam for the convenience of devotees.

Devotees worship Ashtalakshmi along with Vishnu in this temple so that their lives may be enriched.

The Anjaneya in this temple is a Varaprasadi (name/gift of God) who blesses devotees and fulfills their wishes.

Devotees have experienced a reduction in any form of suffering they have endured, also those having difficulties with visas. People have narrated positive results of sincere praying at this temple.

How to Reach Veetrirundha Perumal Temple

The nearest airport is the Chennai International Airport at a distance of 24 kilometers.

The nearest railway station is at Pattabiram, which lies 10 kilometers away.

The temple lies 300 meters away from the Thirumazhisai bus stop.