The Vedapureeswarar Temple lies in Pondicherry or Puducherry, as it is known now. It is one of India’s Union Territories and is in south India. The temple is dedicated to Shiva, one among the Trinity (Trimurti) of Hinduism, and is situated 2 kilometers westward off the Puducherry seashore. Puducherry was originally an old port town called Podouke, now known as Arikamedu, that lies 4 kilometers away from the present-day Puducherry.

Shiva is worshipped here as Vedapureeswarar, while his consort Parvati is called Goddess Tiripurasundari. This place is also called Santa Narayanam because of the abundance of sandalwood trees. Another name for the temple is Easwaran Koil. The presiding deity is worshipped in the form of a Lingam.

The temple is administered by the Department of Hindu religious institutions and Wakf of the Government of Puducherry. 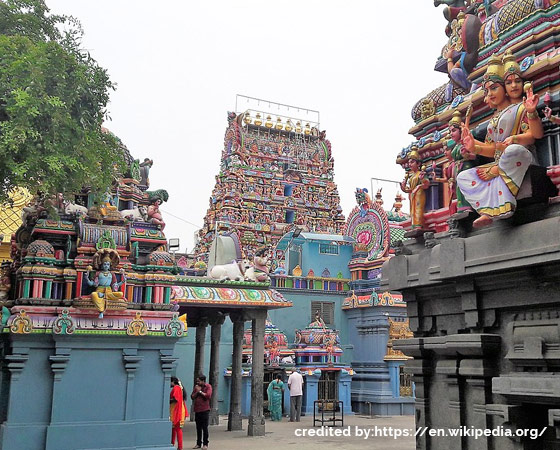 The Vedapureeswarar Temple here belongs to the 18th century. Constructed in the Dravidian architectural style, the temple was razed by French soldiers in 1748. In 1788, the temple was expanded by Dewan Kandappa Mudaliar with the help of public contributions.

The temple has a glorious history going back 238 years. Supposedly, the presiding deity was in the Mission Street Samba Easwaran Temple originally and was shifted to this place more than a hundred years ago.

The presiding deity is Shiva in the form of Vedapureeswarar, and his consort is Goddess Parvati in the form of Goddess Tripurasundari. The Lingam here is self-manifested or Swayambhu. The four pillars of the main shrine depict the different dance poses of Shiva.

The temple is surrounded by a granite wall that encloses all its shrines. It has a five-tiered gateway tower or Rajagopuram that is 23 meters (75 feet) high.

The sanctum can be approached from the main entrance through the flagstaff hall, Maha Mandap, and Artha Mandap. An image of Shiva’s vehicle, Nandi, can be seen facing the main shrine in the Maha Mandap. Before the Maha Mandap are shrines for Vinayaga and Muruga, and Dwarapalas guard the sanctum.

The shrine for Goddess Tiripurasundari is in the second precinct. Shrines for Goddess Durga, Shani, Dakshinamurthy, Chandikeswarar, and the Navagrahas are found around the sanctum. The rectangular temple tank is inside the temple and has 35 steps leading to the basement. On the temple’s southern side, there is a special shrine for Sri Dakshinamurthy.

Saint Ramalingaswamy had sung the glory of Lord Muruga here. Many saints have praised this temple.

The Vanni tree is the Sthala Vriksham of the temple. The Theertham associated with the temple is the Brahmma Theertham.

The temple follows the Shaivite tradition. There are four rituals performed every day by the temple that include Kalasanthi, Uchikalam, Sayarakshai, and Arthajamam. Each ritual comprises Alangaram (decoration), Neivethanam (food offering), and Deepa Aradhana (waving of lamps). The temple also performs weekly, fortnightly, and monthly rituals.

Devotees visit this temple to be free of their misfortunes and sufferings. White cloth and Vastras (clothes) are offered to the deity, and Abishekams are performed for God and his consort, with rose water, tender coconut, curd, milk, sandalwood paste, and sacred ash. On Pradosham days, worshippers light ghee lamps.

A special custom at this temple is an Abishekam, where devotees bathe the idol with milk, honey, ghee, fruit juice, and other liquids. The mixture of all these liquids used to bathe the deity is stored in a container. The mixture is then served as prasad or holy offering to devotees. When the devotees do this ritual with faith and devotion, it has the power to purify their mind, body, and soul from all kinds of sins.

Sri Vedapureeswarar is a very powerful deity, and devotees can be relieved of their misery and suffering if they offer prayers with devotion.

Sri Dakshinamurthy in this temple faces the south, which is very rare, and Saint Ramalinga has praised Murugan, the God of War in this temple.

Benefits of Worshipping at Vedapureeswarar Temple

Devotees come here to pray for marriage, childbirth, and success in their endeavors. The deity is very powerful. It is said that devotees will get relief from all their problems if they pray to God with faith and devotion. The devotees attain peace of mind.

How to Reach Vedapureeswarar Temple, Puducherry

The Puducherry Airport lies 5 kilometers away from the temple.

The Puducherry Railway Station lies 2 kilometers away from the temple.

The nearest bus stop is the Ajantha Theater Signal Bus Stop, which lies 250 meters away from the temple. Taxis and auto-rickshaws also ply to the temple.