The Thyagaraja Temple, lies in Tiruvarur town in the south Indian state of Tamil Nadu. The temple is dedicated to the worship of Shiva. A Shiva Lingam represents God, and he is worshipped as Vanmiganathar. Daily poojas are performed for his idol, which is called Maragatha Lingam.

The main, presiding deity is Sri Thyagarajar, in the form of Somaskanda. His consort, Parvati, is seen in the form of Kondi. The temple is known as Paadal Petra Sthalam as the presiding deity, is revered in the 7th- century, Tamil work, the Tevaram, written by the saint-poets called Nayanmars.

The Thyagaraja temple is considered one of the largest in the country as it sits over 30 acres of land. The Hindu Religious and Charitable Endowments Department belonging to the Tamil Nadu Government is in charge of the temple's administration. Tiruvarur is home to the Trinity of Carnatic music – Shyama Shastri, Thiyagaraja and Muthuswami Dikshitar. 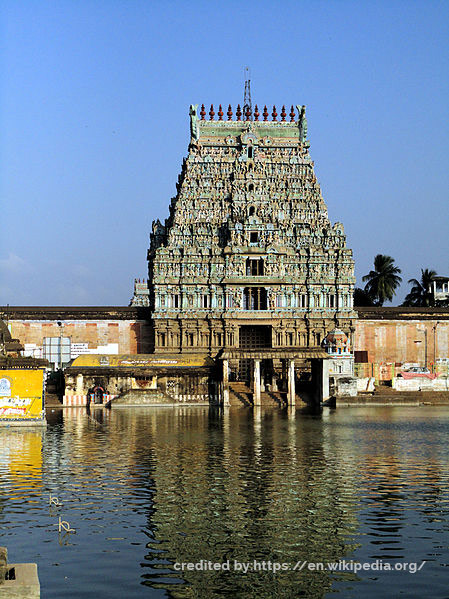 According to Hindu legend, the temple is the site where Goddess Kamalambika's penance to marry Thyagaraja did not bear fruit.

Legend says that a Chola king called Muchukunda got a boon from Indra and expressed a wish to receive an idol of Thyagaraja Swamy reposing on the chest of a reclining Vishnu. To misguide the king, Indra made six other idols, but the king chose the right idol at this place (Tiruvarur). The other six idols were installed in Thiru Nallaru, Thiru Nagai, Thiru Kaaraayil, Thiru Vaaimoor, Thiru Kolili, and Thiru Maraikkadu. These seven regions are called the Sapta Vidanga Kshetram.

It is believed that the Pallavas first established the temple during the 7th century. The contemporary history of the temple goes back to the time of the medieval Cholas. An inscription found on the north and west walls of the Thyagaraja shrine, dated in the 20th year of Rajendra I (1012 – 1044), lists the gifts, including jewels and lamps, given to the God Veedhividankar or Thyagarajar. It also records that the temple was constructed in stone during the reign of the king by Anukkiyar Paravai Nangaiyar.

The temple complex appears to have been a source of inspiration for the huge Brihadeeswarar temple at Thanjavur of Rajaraja Chola. Kulothunga Chola III was the last Chola king who played an important role in the temple's affairs. This was during the early period of the 13th century A.D.

The present structure was built during the time of the Cholas in the 9th century, while later expansions may have been done by Vijayanagar kings of the Sangama dynasty (1336–1485 CE), the Saluvas and the Tuluvas (1491–1570 CE).

The temple complex occupies around 33 acres, and the Kamalalayam tank lies to its west. There are four gateway towers (gopurams). The tallest is the eastern tower at the height of 118 feet.

The two main shrines in the temple are dedicated to Vanmiganathar and Thayagarajar. The former is older and gets its name from the Putru or anthill, which takes the place of the Lingam in the main shrine. The 7th-century poet-saint, Appar, describes the main deity in his hymn as 'Puttritrukondan' (the one who lives in the anthill).

The Sri Anjaneya shrine is at the Rajagopuram entrance. Sri Dharma Shastha has a shrine along with Vinayaka in the inner prakaram(corridor) of Mother Kamalambika's shrine.

The temple has several halls, and six of them are very prominent. The Bhaktha Katchi hall is to the left of the image of Moosukuntha Nandi, where the festival idol of Sri Thyagaraja arrives after the Panguni Uthiram festival.

The Utsava Murthis (festival idols) of Sri Chandrasekarar and Goddess Sekari Amman arrive at the Oonjal hall during the Thiruvadhirai festival. This hall is opposite the Kabatha Katchi hall. Thulapara hall gets its name from the legend in which King Muchukunda placed the Thyagaraja idol of Thiruvarur in one plate and the rest of the idols (received from Lord Indra) in another plate. Purana hall is in the temple's northern part. Rajanarayana hall is a public hall, and Rajendra Chola or Sababathi hall houses the museum of the temple. There are intricate carvings on the pillars and walls of the temple.

The temple complex represents the Sri Chakra with the seven enclosures representing the seven layers of the Sri Chakra. There is a particular point in the temple, from where seven gopurams can be viewed.

Patiri or the trumpet flower tree is the Sthala Vriksham.  The Theertham associated with the temple is the Kamalalayam Theertham, considered to be the largest temple tank in the country.

This temple is believed to have the maximum number of shrines or sannidhis in India. At this temple, all the nine Navagrahas or planetary deities are located towards the south in a straight line. It is said that they were relieved of their curse by God, and hence they worshipped Thyagaraja.

The temple has seven prakarams (corridors) and over 100 shrines. There are over 24 temples on the premises and 86 Vinayaka idols. The largest chariot in Asia is in this temple.

The Thyagaraja Temple is renowned for the Ajapa Thanam or dance without chanting, that is performed by the deity itself. Chola King Muchukunda received a boon from King of Gods Indra, to receive an idol of Sri Thyagaraja Swamy reposing on the chest of Vishnu. Indra had made six other idols to misguide the king. However, the king chose the right idol here at Tiruvarur.

The other six idols were installed in different places. It is said that all seven Thyagaraja idols will dance when taken in procession. The bearers of the processional deity are the ones who actually dance.

Six rituals are conducted daily at the temple. They begin at 05. 30 a.m., and the last one ends at 10.00 p.m. It has twelve yearly festivals on its calendar.

Attending the Sayarakshai at Tiruvarur and then going on to attend the Ardha Jamam pooja at Chidambaram is said to be highly beneficial and auspicious. There are also weekly rituals like Somavaram (Monday), Sukravaram (Friday), and fortnightly rituals (Pradosham).

The idol of Sri Thyagaraja is covered with flowers and a piece of cloth in such a manner that only his and Amman's face can be seen. The deity's foot is displayed twice a year, and at other times, it is covered with flowers. His right foot, as well as Parvati's right foot, are displayed on Aarudra Darshan day, in Margazhi month, while his left foot and Amman's left foot are displayed on Panguni Uthiram day.

The Chola king, Kulothunga Chola (1133–50 C.E.), was responsible for enlarging the temple ritual to have 56 festivals. Some of these are followed even now. In April-May, the annual chariot festival of this temple is celebrated. This is the Chithirai month in Tamil.

The temple celebrates the Tiruvarur Chariot Festival. The chariot is the largest in Asia and weighs 300 tonnes, and its height is 96 feet (29 meters). During the festival, the chariot is taken around the four main streets around the temple. Lakhs of devotees from all parts of Tamil Nadu attend the event.

The Theppam or Float festival follows the chariot festival. The chariot also inspired the design for the memorial for Saint Thiruvalluvar in Valluvar Kottam, Chennai.

How to Reach Thyagaraja Temple, Tiruvarur

Trichy International Airport is the nearest airport and lies 123 kilometers away from the temple.

Tiruvarur Railway Station is 2 kilometers away from the temple, and it is the nearest.

The town is well connected with most major cities. There are public buses and private vehicles, too, can be hired.