The Thirukkadigai Temple lies in Sholinghur, a village in the Vellore district of Tamil Nadu, and dedicated to Vishnu. There is a granite wall surrounding the entire temple, which is one of the 108 Divya Desams allocated to Vishnu. People worship Vishnu as Lakshmi Narasimhar and his consort as Thirumamagal. The temple is maintained by the Hindu Religious and Endowment Board of the state government. 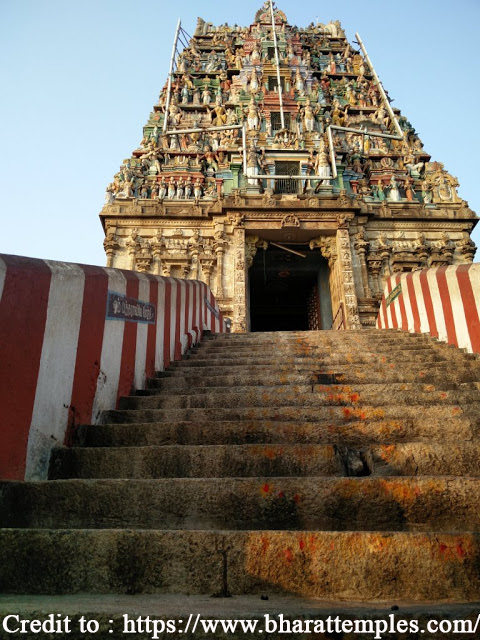 Legend has it that a Chola king discovered a Shiva lingam and built a temple there. According to the Brahma Purana, the shrine is called Katikachlam and Chintamani. Sri Vishnu Purana and Sri Padma Purana speak of the greatness of the place.

According to legend, Rama, after slaying Ravana of Lanka, wanted to return to his abode. When Anjaneya expressed his wish to accompany Rama, the latter directed him to protect the Saptarishis. Two demons, Kalan and Keyan, caused disturbance to the Saptarishis, by trying to break their penance. Anjaneya tried to fend off the two demons. Narasimha gave him his sacred conch and holy discus to destroy the two as well as other demons. God appeared before the sages as Narasimha. He directed Anjaneya to sit atop the small hill and bless devotees till the end of Kaliyuga.

History of the Thirukkadigai Temple

According to Hindu scriptures, the place was called Kadigachalam or Thirukkadigai, where devotees need to spend just 24 minutes to attain Moksha (salvation). The Saptarishis wanting a darshan (vision) of Narasimha performed Tapasya (meditation) here and received Moksha within 24 minutes. Sage Vishwamitra got his title of Brahmarishi here, and the place was known as Simhapuram. There are several inscriptions at the foothills and the top, indicating generous contributions from the Chola kings. The Shaivites controlled the town, and there are temple ruins, with unfinished Nandis and stupas.

Architectural Importance of the Thirukkadigai Temple

At the top of the hill, devotees climb a flight of 1,305 steps. Narasimha sits in a yogic posture in a shrine facing East and is called Yogi Narasimha Swamy. The temple has a five-tiered Rajagopuram at the hill-top. The Vimana (tapering roof) over the sanctum is called Hemakoti Vimanam. There is no Sthalavriksha at the big hill. His consort Amrithavalli Thayar has a separate shrine. This shrine sits on the Periya Malai (big hill) at 750 feet.

The temple of Hanuman is present on Chinna Malai (small hill) at 350 feet. It is called the Anjenayar Swamy Temple. A Temple Tree (Ashoka tree) is present at the small hill, adjoining the temple tank. The image of the festival deity, Varadarajar, is housed in the lower shrine of the big hill.

Peyazhwar and Thirumangai Azhwar revered Thirukkadigai. The temple is one among the 108 dedicated to Vishnu. Ramanuja considered the temple to be one of the 74 seats to spread Vishitadvaita. Doddacharya, a Vaishnavite saint, followed in the footsteps of Ramanuja and advocated Vishitadvaita. He performed a lot of miracles and impressed Achyuta Deva Raya, a relative of Krishna Deva Raya. The latter gave Doddacharya a lot of donations for the maintenance of temples. The temple celebrates a festival named Doddacharya Utsavam during the Tamil month of Maasi. Doddacharya is given a special place in temple processions during Brahmotsavam.

According to the Vaikasana Agamic tradition, the temple follows the Thenkalai tradition of worship. The priests perform Poojas daily and during festivals. They perform rituals four times a day - Ushathkalam, Kalasanthi, Sayarakshai, and Ardha Jammam. Each ceremony follows three steps – Alangaram(decoration), Neivethanam (food offering), and Deepa Aradhana (waving of lamps).

The temple performs Abishekam for the principal deity and his consort. Priests use ingredients for the Abhishekam, including milk, honey, sugar, and curd, known as Panchamritam, distributed among the worshippers. Devotees serve the deity by creating temporary halls when God goes in a procession. They build stone halls and developed endowments.

One of the traditional beliefs is that taking a bath in the temple tank will annihilate a person’s Brahmahathi sin. Devotees make offerings of jaggery, rock candy, and plantain fruits. They also offer curd rice and donate clothes, conduct Abishekam, and Pooja.

The devotees undertake Girivlam (circumambulation of the hill) on Pournami (Full Moon day). In the month of Karthigai, devotees take a bath in the temple tank – Chakra Theertham.

The temple celebrates the Brahmotsavam festival in the Tamil month of Chithirai, during April-May, the Narasimha Jayanti during Vaikasi in May-June and Karthigai Thiruvizha in November-December.

During the Brahmotsavam festival, the temple car housing the festival deities of Narasimhar and Amritavalli goes around the streets surrounding the temple. Priests perform Utsavams in the Sri Bhaktavatsalar Temple. They conduct special poojas for Thayaar on Fridays, and Anjaneyar on Sundays, and in Karthigai month.

How to Reach the Thirukkadigai Temple

One can take a local train from Chennai to Arakkonam Junction and take road transport from there.

One can hire an autorickshaw for Rs.100 and above from Sholinghur Railway Station to the temple. One can also take a direct bus from Chennai to Thirutani. There are plenty of buses from there to Sholinghur.