Origins of the temple

This ancient temple’s origins date back to the 9th century CE. It is a National Heritage Monument, and the Archaeological Survey of India (ASI) is in charge of its maintenance. The temple is the second Shiva Sthalam in Kongu Nadu and also one among the 276 Thevara Paadal Petra Sthalams. In this temple, Lord Shiva graces as Swayambhumoorthi (self-manifested). It is a west-facing temple, which has no Rajagopuram or main tower. In front of the temple stands a large stone Sthupam or pillar, as is found in many Shiva temples in Kongu Nadu.

Some interesting legends are associated with the temple. It talks about how the demon king, Soorapadman, who had acquired great powers due to his rigorous penance, tormented the Devas (Gods) in heaven and imprisoned many of them. In mortal fear, the Gods went to Shiva and asked for his help. Shiva then sent his young son, Murugan, with a large contingent of soldiers led by his lieutenant, Veerabhahu to kill Soorapadman and his army of demons. A fierce battle ensued, and finally, Lord Murugan killed Soorapadman and brought relief to the Devas.

According to the legend, Murugan acquired Brahmahathi Dosham because he killed the demon king as well as others in the fight. This battle is called “Soorasamharam”. To get relief from this dosham, Murugan decided to install a lingam here and began to worship it. As the lingam was installed by Lord Murugan, it was called “Thirumuruganathaswamy”.

The temple is among the 276 Devara Paadal Petra Shiva Sthalams and the 7th Sthalam in Kongu Nadu. It’s a very big temple, and its Rajagopuram or main tower is around 120 ft high and has two corridors and 7 tiers. The temple is East-facing. There is a Moolavar Lingam in the temple that is a Swayambumurthi or self-manifested.

Three things make this temple famous – the presiding deity or Moorthy, the Sthalam or place of divinity, and the Theertham or Holy Water. The first person to worship Lord Shiva in this temple was none other than Lord Brahma. There is a belief that Kamadhenu, the bovine goddess, also worshipped Lord Shiva here. One can see its hoof mark on the Lingam even now. The name Ahnilaiyappar for the deity is derived from the words, “Ah”, which means ‘cow’ and “nilai”, meaning ‘place’. This is where Eripatha Nayanar, one of the 63 Nayanmars, was born. King Pugazh Cholan also is from this place. He later became one of the Nayanmars.

Karur is the birthplace of the renowned Karuvarur Siddhar. He is one of the 18 divine Siddhars of South India. In his hymn, ‘Thiruvisaippa’, he has sung praises of the Lord. This hymn is a part of the 9th Thirumurai. The legacy of this temple is deeply connected with the life of Karuvarur Siddhar. According to legend, some Brahmins went and complained to the king that the Siddhar was a follower of the Vama Margam. This meant that he used to offer meat and wine to the Lord. When the king enquired into these allegations, he realized that they were false, and he imposed punishments on the brahmins. But the harassment continued, and unable to bear it, the Siddhar rushed to the shrine, and embraced the idol of Ahnilaiyappar and became one with it. Due to this, the Lingam is seen to be in a slanting position. One can see the Jeeva Samadhi of Karuvurar Siddhar inside the temple. 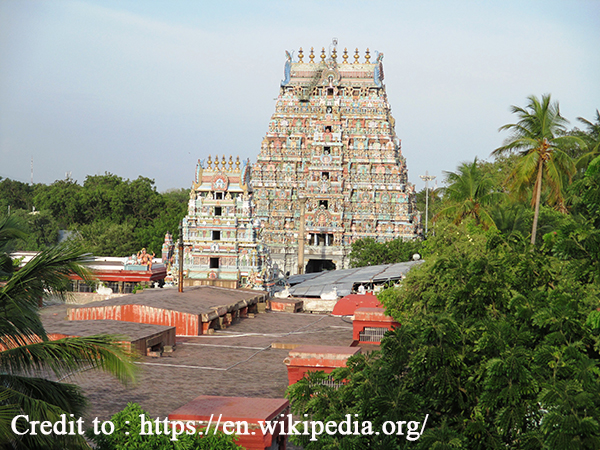 This temple is one among the 276 Devara Paadal Petra Sthalams, and the 4th Shiva Sthalam in Kongu Nadu. The presiding deity is Swayambhumoorthy (self-manifested) and is made of Nava Pashanam. This temple is at the top of a hill. It is located at a height of about 1900 feet and to reach the top, one has to climb 1200 steps. Those who cannot climb the steps can reach by using the motorable road, as vehicles go right up to the temple entrance. The shrine of the Moolavar or presiding deity faces west. The deity was supposedly worshipped by Lord Vishnu and Adiseshan. 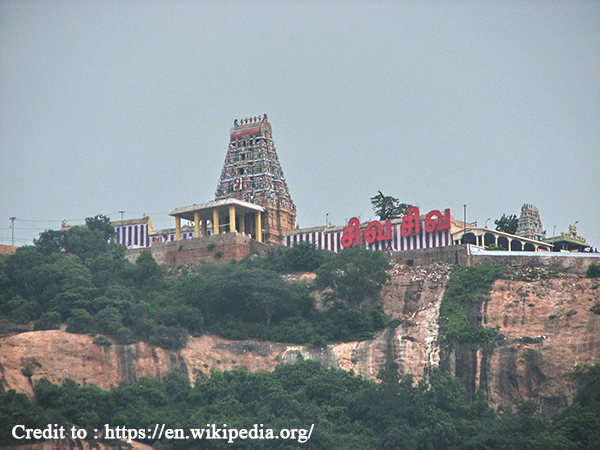 The temple is very ancient, and the wall inscriptions hint that it was probably built around 2000 years ago. The hill on top of which the temple is found is composed mostly of sandstone and has a reddish color. Hence, the place is called Sencode. There is also another probable reason for the name - the hill is a ‘Senguthana malai’ or a hill, which has a straight formation. It has other names too. One is Nagagiri or snake mountain. Nagam means ‘snake’ and giri means ‘hill’. It’s also called Vayumalai or Windy hill, Vayu meaning ‘wind’.