Suchindram temple is 1300 years old. The current temple was constructed in the 17th century and is well known for its architecture and its sculptures. The temple is located midway between Nagercoil and Kanyakumari. It is the only temple that houses the Lingam representing Sthanumalyan (Trinity of Shiva, Vishnu, and Brahma). The top half is the “Sthanu” name of Siva, the middle “Mal” name of Vishnu, and the base “Aya” name of Brahma. Hence it is important to devotees belonging to both Shaivite and Vaishnavite sects.

The name of ‘Suchindram’ is from the Sthala Purana. According to temple legend, the King of the Devas, Indra, got relieved from a curse while offering penance to the main Lingam in the temple. The term “Suchi” in Suchindram is believed to be derived from a Sanskrit word, which means “to purify.” 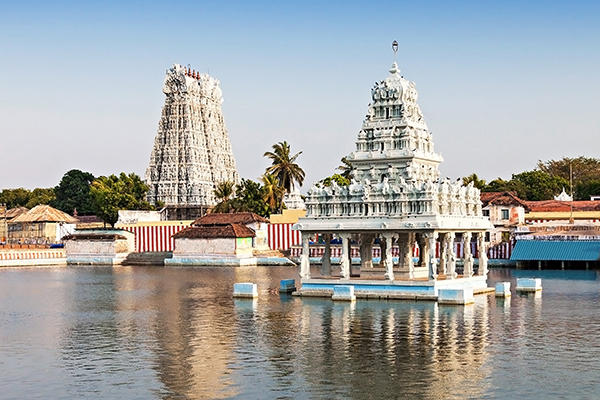 According to temple legend, one day, the Holy Trinity, Shiva, Brahma, and Vishnu arrived at the ancient temple and decided to test Devi Anusuya, who is the wife of saint Atri. As Sage Atri was not there, they went to Anusuya, a chaste woman, in the guise of three sages, and asked for food. However, when offered food, they refused, stating that they have vowed to take offerings only from people who are not clothed. Since it was a sin to deny the requests of guests, she decided to humor them and do as they wished. By sprinkling holy water on all the three sages, she turned them into infants; Shiva became Durvasa, Vishnu became Dattatreya and Brahma as Chandra. Then she fed all the three babies, as requested. On observing this, Goddess Saraswati, Goddess Parvati, and Goddess Lakshmi came down and asked her to return their husbands to their original form. Anasuya complied and restored the three Gods to their original form. When they were about to leave, Anusuya requested the Trimurthi to remain there. Hence, they manifested as Swayambhu Lingas, under the Amaltas tree, known as Sthala Vriksham, which is now more than 2500 years old. A small shrine has been constructed in front of this tree.

As per another temple legend, Shiva had stayed in Suchindram when he had come to marry Devi Kanyakumari. He commenced his journey for the wedding that was scheduled to be held at an auspicious time in the night. When he reached Vazhukkamparai (5 km away from Suchindram), Sage Narada, disguised as a rooster, had falsely crowed to indicate the onset of the morning. Thinking that the auspicious moment had passed, Lord Shiva has returned to Suchindram without marrying the Devi.

This temple has a 134-foot-high, white Gopuram with seven stories. Its portico is adorned with finely sculpted images of various deities. To the right is a vast temple tank.

The major attractions of this temple are the four musical pillars, which are 18 feet tall. These pillars were carved out of a single granite stone. They are located in the Alankara Mandapam, and when struck, create various musical notes.

The temple has a dancing hall comprising 1035 pillars, which are beautifully carved.

The presiding deity is Sthanu (Lord Shiva) and his idol, along with those of Mal (Lord Vishnu) and Aya (Lord Brahma), are found in the sanctum sanctorum of the temple. Next to it is a shrine for Vishnu; the idol has been made by combining eight different kinds of metals. On the right is a shrine of Rama and Sita, while on the left is the shrine of Ganesha. In front, there is the Navagraha mandapa. There are also around 30 shrines of Kailasanathar, Nataka Sala, Vadakkedam, Kailasattu Mahadeva, Pancha Pandavar, Kontai Adi, Guru Dakshinamurthy, Cheravasal Sastha, Muruga, Garuda, Subramania Swamy and many more.

Another prominent idol is Hanuman at a height of 22 feet. Carved out of single granite rock, this is one of the most colossal statues in India. It was kept hidden in the temple as attacks from Tipu Sultan were feared. In 1930, it was found and was subsequently restored to its former glory. Another interesting aspect is the carving of Vinayaki (Female Vinayaka) in the temple, and the image of Nandi, the vehicle of Shiva, is also captivating which is 13 feet in height and 21 feet in length.

The most famous festival is the ten-day Car festival which is held during December or January. Other important festivals of the temple are Avani Festival (August), Chithirai Festival (April) and Masi Festival (March)

How to reach Suchindrum Thanumalayan Temple

The nearest airport is Trivandrum, from where tourists can take a taxi to Kanyakumari.