Sri Magudeswarar Temple is located in the town of Kodumudi, which is 25 kilometers away from Karur, in Erode District. It is dedicated to Lord Sri Magudeswarar and his consort Sri Vadivudainayaki. This is one of the “Paadal Petra Sthalam”, as the temple had been praised in Thevaram hymns. Tamil poets & saints like Thirugnanasambanthar, Thirunavukarasar, and Sundaramurthy have composed several hymns on this shrine. Sage Agastya has been associated with this temple and this is one of the most revered temples of Kongu belt. This is also a Parihara Sthalam for Naga Dosham, where the malefic effects of serpents are reduced. 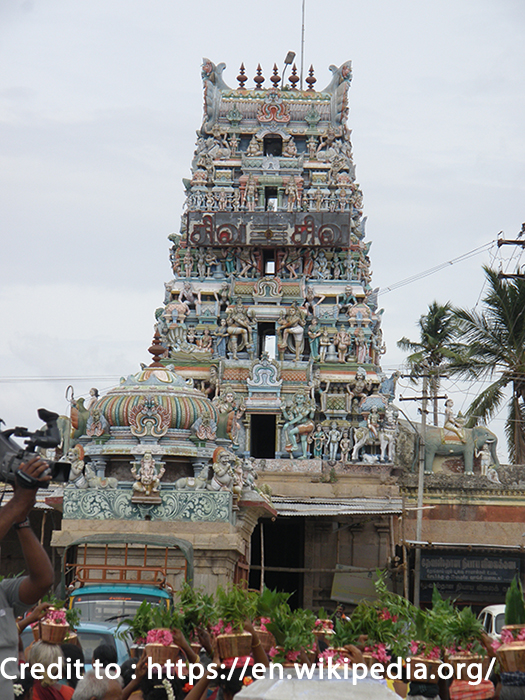 Once there was a tough completion between Adisesha, the serpent-bed of Lord Vishnu reclines, and Vayu, the archetype of wind, to determine who is stronger among them. Indra, the king of Devas, suggested to put Mount Meru at the center and tied it tightly with the help of Adisesha. Vayu blew it heavily, to push Adisesha aside. During the tug-off war, the Mount Meru got split into five different pieces and fell at five different places. They got turned into five gemstones, where Coral fell at Thiruvannamalai, Ruby at Rathinagiri, Emerald fell at Engoimalai, and the Sapphire fell at Pothigaimalai. The Diamond which had fallen at Kodumudi became Swayambulingam or the self-manifested lingam of Lord Shiva. Since the piece was originally a part of the Mount Meru, the Lord is called Magudeswarar. Sage Agastya worshiped Shiva in this temple, and Lord Shiva performed his celestial dance for Sage Bharadwaj.

The name Pandikkodumudi for this town was because of the legend when Pandian king prayed towards the Lord for his son, whose fingers were not growing. After taking a dip in the temple tank, the fingers grew normally. Thus to pay his tribute, he renovated this temple and patronized generously.

This is one of the temples where there are separate shrines for the holy trinity - Shiva, Vishnu, and Brahma on the same campus. The epigraphs of this shrine belong to the reign of King Sundarapandiyan. There is a separate shrine for Goddess Saraswati and the idols of Dakshinamurthy, Hanuman, Navagraha (nine planetary archetypes) are placed in the corridors. Lord Vishnu is worshiped as Pallikonda Perumal and Veeranarayana Perumal. It is believed that the Lords Vishnu and Brahma worshiped Lord Shiva. Vanni Tree in this temple is believed to be very old. Beneath the tree, there is an idol of Lord Brahma with three faces. Another interesting trivia about the tree is that only some portion has thorns, and the other portion does not have thorns.

“Chithirai Thirunal” is the main festival of this temple, and is celebrated for 11 days during the months of April-May. “Aadi Perukku” day celebrated during July-August, witnesses a lot of devotees. On the days of the new Moon, full Moon and “Pradosham” days (13th Moon), special Poojas are performed.

Many devotees perform rituals like Tarpanam or Shraadh for their deceased ancestors, on the banks of River Cauvery. Devotees who celebrate their 60th birthday perform Ayush Homa here. People with malefic effects of serpents, or suffering from Sarpa Dosha (snake afflictions) or Rahu affliction would benefit from this temple. The sacred tree of this temple is Vanni Maram, and if the leaf is dunked in a pot of water, the water retains its purity for years. Other prayers like longevity, progeny, health, and victory over obstacles are also submitted here.

How to reach Sri Magudeswarar Temple

Both Coimbatore and Trichy airports are at 110 kilometers from the temple. Both are national and international airports.

The town of Kodumudi has a railway station, which connects with various important places across Tamilnadu.

The bus stop is very near to the shrine. State transport, along with private has buses that give good connectivity. Other than buses, autos, cabs and private taxis provide excellent connectivity and are available round the clock.