The Sri Lakshmi Kuberar temple has been built by the Rajalakshmi Kubera Trust in an area of 4,000 square feet, in the village of Rathinamangalam, near Chennai. The temple is dedicated to Kubera and has a five-tier gopuram.

Rathinamangalam lies on the road connecting Vandalur Zoo and Kelambakkam. 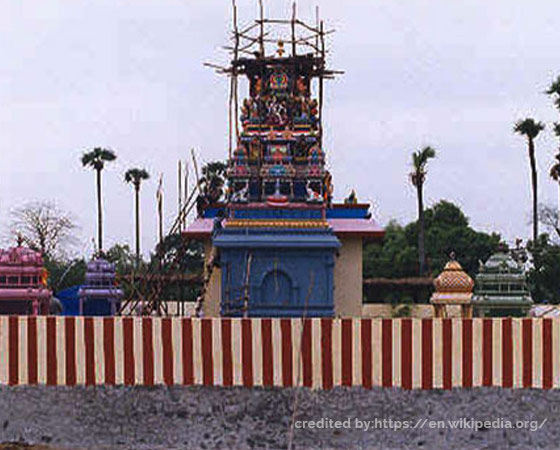 According to the Puranas, Kubera, the son of sage Vishrava and Ilavida, was the original ruler of Lanka. Ravana was the son of his stepmother. He threatened Kubera and took over the kingdom and his aircraft, the Pushpaka Vimana, by force. Kubera's aircraft, the Pushpaka Vimana, would pour precious stones everywhere while in flight. It is believed Ravana faced problems only after Kubera made his exit.

Kubera is the God of the celestial beings called Yakshas. Plump, short-statured, and fair complexioned, he is depicted with a pot of money in one hand and a club in the other. He is adorned with many jewels. His mount is an elephant, and his consorts are Riddhi/Kauberi and Charvi.

It is believed that Kubera obtained the status of a God in the Puranas. After Kubera left Lanka, he is said to have settled down in the city of Alaka. The domain of Kubera is high up in the Himalayas, partly because he is the guardian of the North, and because the mountains are the source of mineral wealth. Kubera watches over the earth's storehouse of treasures that include gold, silver, jewels, pearls, and nine Nidhis (treasures).

Kubera finds mention in Buddhism and Jainism scriptures too. Kubera is the God of the various celestial beings residing in forests, and he is associated with different aspects of nature, including the Yakshas, Gandharvas, and the Kinnaras.

Kubera was an ardent and sincere devotee of Shiva.

He performed severe penance and impressed Shiva with his Bhakti and efforts. He invoked Shiva's blessings. Kubera went to have a Darshan (divine view) of Shiva at Mount Kailash. He found Shiva with his consort, Goddess Parvati. So taken aback and stunned was Kubera by the beauty of Goddess Parvati that he felt remorseful for not having worshipped such a beautiful and fine Goddess for a long time. While he was lost in thought, one of his eyes shut itself. Goddess Parvati thought Kubera was winking at her and looking at her with evil intent. She became angered, and the outcome was that his shut-eye burst. He lost sight in that eye and was cursed to remain ugly.

Kubera pleaded with Shiva for forgiveness and explained to Shiva that he never had any evil intent. Shiva left the decision to his consort Goddess Parvati. The Mother Goddess forgave him and restored his injured eye, but it remained smaller than the other eye.

Shiva forgave Kubera and appointed him as the Ashtadig Palaka (guardian) of one of the eight directions – the North. Goddess Parvati made Kubera the King of wealth and material. Kubera not only owned wealth and food grains but was also the custodian. Now Kubera's responsibility was to ensure he distributed all the wealth created by Goddess Lakshmi. One can view Kubera in pictures with his family, showering navaratnas, and gold.

Sri Kubera can be seen in the temple holding the Sanganidhi pot in his left hand and the Padmanidhi (kalasas) pot in his right hand. He graces the sanctum with the Supreme Goddess Sri Mahalakshmi and his wife, Chitharini. Inside the shrine, Goddess Mahalakshmi is seen blessing Kubera. Below the main shrine of the temple is another shrine, at a lower level called the Kubera Lingam or Pathala Kubera.

The temple has the Kann Drishti Ganapati shrine (for protection against evil eyes). There is a shrine for Swarnakarshana Bhairava. In many temples, he is found as the guardian deity. Here he is present as the deity who helps you attract gold. There are shrines for Selva Muthukumaran, Sri Swami Ayappan, Sri Adirshta Devi, a rare shrine for Brahma and Saraswati, Lakshmi Ganapati and the Navagrahas in the Prakaram (corridor). The temple also has a Ghosala (cow care shed) on the premises.

The Sri Lakshmi Kuberar temple is the only temple in India dedicated to the worship of Sri Mahalakshmi and Kubera.

The temple items used in pooja are currency notes and coins. They are used to decorate the main deity and the main shrine.

There is a pond with fish on the temple premises. There are special Vaastu fish in the pond. The Vaastu fish bring good luck. There is an idol of the Shankaracharya above the pond.

The temple also houses an idol of the Laughing Buddha on the premises. Devotees believe it will bring them good luck.

Kubera is the God of wealth, and he makes people's lives stable with good strength, improvement in education, business, industrial growth, and financial inflow.

Devotees perform Tirumanjanam to Kubera and offer Vastras (clothes). Performing the Kubera Pooja should be done with discipline and sincerity. There are separate Mantras and Vidhis to perform the pooja. Poojas performed on Amavasya and Pournami in November will yield good results.

It is believed that an individual who performs the Kubera Pooja will be blessed with wealth. For a life of wealth and comfort, one should perform the Lakshmi Kubera Pooja. Any devotee praying to Kubera will be blessed with significant financial inflow and prosperity and find new paths for income and increasing wealth. Regular worshipping of Kubera idol and the Yantra will help the devotees gain good luck, wealth, and prosperity. Performing pooja for Kubera will enrich one's life.

Festivals celebrated in the temple include Deepawali, which falls in October-November. It is believed that worshipping in this temple on this festival day is immensely auspicious and brings prosperity. The temple also celebrates Vaikunta Ekadashi in December-January and Akshaya Tritiya in April-May.

The nearest airport is the Chennai International Airport.

The railway station closest to the temple is the Vandalur Railway Station.