Sri Kalika Durga Parameshwari Temple is dedicated to Goddess Kalika Durga. This temple is located in Vidyaranyapura, Bangalore. The temple is one of the older temples of Banglore, which was renovated in the year 1988 by Late Sri. Ramu Sastry, an ardent devotee of Goddess Durga. The main attraction here is the temple tower or Gopura, near the main entrance of this temple which is almost 108 feet high. Often referred to as Swetha Kshetra, this temple is one of the iconic places of Banglore, which attracts a lot of devotees across the globe. 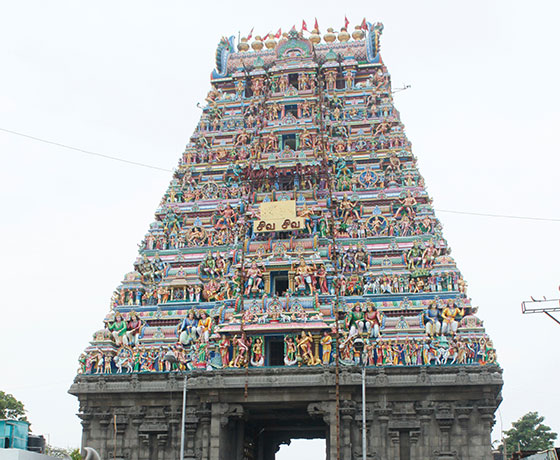 Once there was a heavy draught in this place, which parched the earth, and left with no rains. The crops dried up, and extreme famine hit the people very hard. Sage Jabali, through his power of extreme devotion and austerities performed over several years, understood that it was all due to the demon Arunasura. He was escaped when Goddess Kali tried to kill the demon Shambasura. Since Sage Japali wanted to end this, he took the advice of Lord Indra and requested him to allow the sacred cow Kamadhenu, to be a part of the Yagna. Nandini, the daughter of Kamadenu, refused to come to earth, and take part in the Yagna. Since she was reluctant and refused to help the people, even she could have extended her support, she was cursed by Sage Jabali. Later when Nandini realized her folly, she was granted her redemption, when she agreed to come in the form of a river.

Demon Arunasura, through his boon from Lord Brahma, became invincible. He received a boon that, anything with four legs or two legs can not hurt him. Goddess turned as a beautiful maiden, where he was highly attracted by her. Goddess then took the form of a rock. When the demon tried to break the rock, the rock then disintegrated into many bees and killed the demon. It was then Sage Japali, who venerated the goddess by hydrating her with tender coconut water. She was cooled from her anger, after annihilating the demon. She was then called as Bramarambhika, the queen of bees. Goddess Durga then incarnated in the form of a calm and composed deity. The place was then named Kateel, where the word Kati refers to the center, and the word Eel refers to the area.

The magnificent temple tower is 108-foot height. This temple houses over 9 different avatars of Goddess Durga. There are other shrines for Lord Ganesha, Lord Krishna, Lord Muruga, and Lord Narasimha.like a group of temples. There is also Navagragha installed in this temple.

There are several festivals celebrated here. Simhamaasa is one of the prominent festival, which attracts a lot of devotees.  Goddess Durga takes prominence here, where Durgashtami and Navarathri are important festivals. Other festivals of this temple are Deepavali and Ugadi.

Since it is an adobe of nine incarnations of Goddess Lakshmi, Saraswathy, and Parvathy, this place is highly mystical. The boon of the devotee would be granted, which will protect from all odds of life. People waiting for progeny, or for wedding bells, would make their request in this temple. There would be special Puja, conducted for people who want to pursue the fields of arts and science. Goddess Durga would be like an amulet, protecting from all challenges.

Banglore airport is both nationally and internationally connected, with good facilities. Devotees can come to Bangalore airport, and then resort roadways to reach the temple.

The nearest railway station is in Yeshwantpur, which is very close to this temple. There is a metro station also, which connects a lot of other metros.

Apart from government busses, there is a plethora of transportation available from cabs, and autos. It is well connected within the city, and Banglore has good connectivity by road.