This temple is one among the 276 Devara Paadal Petra Shiva Sthalams and also the 60th Shiva Sthalam on the Cauvery river's northern bank, in Chola Naadu or Vadakarai. In this temple, Lord Shiva is self-manifested or a Swayambumurthi. Here, Lord Jambukeswarar faces west, and Goddess Akilandeswari faces east. The temple is one of the Pancha Bootha Sthalams and represents Appu or Water. It is also a Shakti Peetam and the first among the 70 Madakkovils that King Kochengat Cholan built. The Moovar or three saints have sung hymns about the Lord here. The Rajagopuram or main tower which faces east has 13 tiers, and the tower that faces west has 7 tiers. The temple has five corridors and seven main towers. 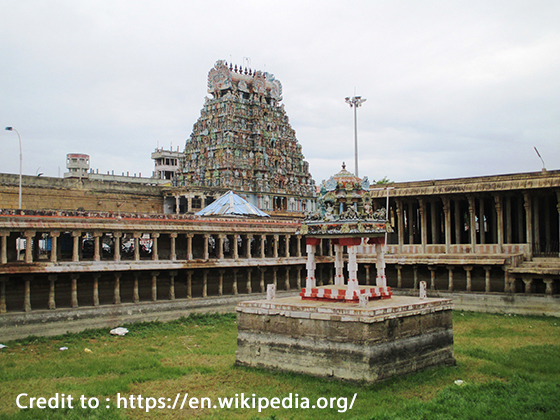 This magnificent temple bears eloquent testimony to the architectural excellence of India’s past. The temple complex occupies a sprawling 18 acres of land. In ancient days, there were lots of white Naaval trees in this area. Emperor Kochengat Chola built the temple around 2500 years ago. There is a belief that a spider and an elephant worshipped the Lord here and received salvation. This legend is behind the temple’s name. while Thiru is a prefix that indicates respect, ‘Anai’ denotes elephant, and ‘koil’ means temple in the Tamil language. The temple is now called “Thiruvanaikkaval”.

The story goes that two of Lord Shiva’s security guards or Shivaganams called Pushpanathan and Gnanatharul Maliyavan were cursed to be born as an elephant and a spider, respectively. They worshipped Lord Shiva at this temple to be free of the curse. There was a forest of naaval, or jambu trees, near the Chandratheertha tank, which was filled with water from the Cauvery river. It is said that Shiva appeared here under a naaval tree as a Swayambu Lingam.

While the spider spun a web to give shelter to the Lord, the elephant brought water in its trunk for doing Abishekam. But the elephant would destroy the web. However, the spider would spin another one. This went on for a while. Finally, the spider decided to put a stop to this and entered the elephant’s trunk and bit it. The elephant struck its trunk on the ground to dislodge the spider, but both died in the process. Pleased with their devotion, the Lord gave them salvation. Pushpathanthan or the elephant was freed of the curse and went back to Shivalogam to become a Sivaganam, as he fulfilled his penance by offering Abishekam to the Lord. But the spider was not able to realize its wish of building a temple around the lingam, and it was reborn as King Kochengat Chola, who is believed to have built 70 Madakkoils. A Madakkoil’s unique feature is that an elephant cannot approach it easily. It is said that he was aware of the story surrounding his previous birth, and hence built the temples at an elevation and with some steps that had to be climbed. Besides, the entrance of the garba graham or sanctum sanctorum is so narrow that no elephant would be able to enter it.

There is another legend about this place, associated with Sage Jambu. It is said that Lord Shiva granted darshan to the sage and gave him a naaval fruit or blackberry as prasadam. The sage swallowed the seeds of the fruit as well, thinking that it was sinful to spit them out. The seeds grew into a tree, which pierced his head, and thus, he attained salvation. Since Shiva gave salvation to Sage Jambu here, he is revered as Sage Jambukeswarar, and the place came to be known as “Jambukeswaram”.

Yet another legend claims that goddess Parvati as Akilandeswari did penance in the forest here. She fashioned a lingam from sand and water from the Cauvery river, and installed it under the same white naaval tree or Jambu tree, which emerged from Saint Jambu. This lingam is called “Appu Lingam” or Water Lingam. Happy with her penance, Lord Shiva appeared before her and imparted to her the “Shiva Gnana Upadesa”. She learnt the lessons facing east from Shiva, who was facing west. Hence the temple is regarded as an Upadesa Sthalam.

Interestingly, the Thiru Kalyanam or ‘wedding festival’ is not celebrated in this temple. Neither is the Lord taken to the ‘Palli Arai’ or bed chamber at night. This is because the Lord here is a guru or teacher of Parvati.

It is said that when building one of the temple walls, Shiva came here as a saint, Vibhuti Siddhar, and gave sacred ash to the workers as their wages. The ash, however, turned into gold, which was in proportion to the work done by each worker. This wall in the 4th corridor is known as “Thiruneetru Madhil”. “Thiruneeru” denotes sacred ash, and “Madhil” denotes a wall in Tamil. The wall is more than 8000 feet long, 6 feet thick, and 35 feet high. A shrine for Vibhuthi Siddhar is located near the Brahma Theertham.

There is one more legend about this place. There was once a Chola king from Uraiyur, close to Trichy, who was a great devotee of Shiva. One day, he was bathing in the Cauvery river when his necklace fell into the water. He prayed to Shiva so that he would recover the necklace. Meanwhile, one of the temple priests was filling his pot with water from the river for performing the lord’s Abishekam. Along with the river water, the necklace also entered his pot and when the Abishekam was being performed, it was spotted.

It is believed that the Lord here was worshipped by Goddess Parvati, Brahma, Suryan, Vishnu, Chandran, Sages Jambu, Agasthiyar, and Gowthamar, and the Ashta Thikbalahars.

Apart from the shrines of Shiva and Parvati, there are shrines and idols of other deities like Murugan, Vallabha Ganapati, 108 Shiva Lingams, Dakshinamurthy, Sankaaranyeswarar, and Aadi Jambukeswarar in the corridors. A separate Lingam called Kubera Lingam can be seen here. Supposedly, it was worshipped by Kubera. Lord Saneeswaran has a separate shrine. He is seen with his mother, Chaya Devi, and wife, Jyeshta Devi. A shrine for King Kochengat Chola also can be seen in the corridors. In the second inner corridor, is a separate temple for Goddess Akilandeswari.

This is one among the Pancha Bootha sthalams. It is Appu Sthalam, which represents water. The water is seen in the form of a perennial natural spring below the Shiva Lingam (in the sanctum). It is visible even today, and the Lord here is called Jalakandeeswarar for this reason. In Tamil, ‘jalam’ means ‘water’. People flock to this temple to worship Goddess Akilandeswari, who is very famous. The name means ‘one who rules the universe. In Tamil, ‘akilam’ denotes universe, ‘aanda’ denotes ruler and ‘easwari’ means goddess. The goddess’ earring is called ‘Thadangam’, and it is quite big. The belief is that she appeared very angry at first, so Sri Adi Sankaracharya drew out her anger and contained it as Chakras in the earrings. One is called the Sri Chakra, and the other is called Shiva Chakra. In a further attempt to decrease her wrath, Lord Vinayagar’s shrine is kept in front of her, and Lord Murugan’s shrine is kept behind her. For the noon pooja, the temple priest dresses like a woman and performs the pooja. This signifies that Goddess Parvati herself is worshipping the Lord.

According to popular belief, Lord Ranganathar stayed at Srirangam solely for worshipping the Lord here. Every year, Lord Ranganathar’s idol is brought here and kept for one day to commemorate this incident. It is taken back to the Srirangam temple the next day. It is said that Saint Arunagirinathar worshipped Lord Murugan here for protection from lustful thoughts, and Murugan captured a demon who personified lust. One can see the demon beneath Murugan’s foot. This is a unique depiction of Muruga, not seen anywhere else. Saint Arunagirinadhar has also sung praises of Lord Murugan here in his well-known Thiruppugazh.

It is believed that Kalamega Pulavar (poet) was blessed here by Goddess Akilandeswari with poetic talents.

Nine Theerthams (holy water) can be seen in this temple. A grilled window with nine holes is seen in front of the main deity. Devotees can worship the Lord only through these holes. This is equivalent to taking a dip in each of the 9 Theerthams, people believe.

A magnificent sculpture of Lord Ekapadeswarar is seen in a pillar in the “Mahamandapam” of Goddess Akhilandeswari’s temple. Lord Brahma and Lord Vishnu flank the Lord on either side, seated on their respective vahans.

In the halls (mandapam) at the temple’s third entrance can be seen monolithic stone pillars. A massive chain carved out of stone is also notable. One can see pillars here with the 12 zodiac signs beautifully engraved on them. The hall, which has 1000 pillars, contains many intricately carved reliefs.

Worshipping the lord here is believed to bring relief from sins and salvation.

Those who lack progeny worship Goddess Akilandeswari here. It is also believed that worshipping Akilandeswari will get rid of any obstacles to marriage.

Thiruvanaikkaval is in Trichy, which is also called Thiruchirappalli. It is around 8 km from the Trichy bus stand. It is 3 km away from Srirangam and lies between the Kollidam and Cauvery rivers, and is roughly 3 km from Srirangam. Thiruvasi, Anbilanthurai, Tiruchirappalli (Trichy Malaikkottai), Thiruppatrurai, Thirumanthurai, Thiruppainjeeli, Mukkeecharam (Uraiyur), Thirupparaithurai, and Thiruverumbur, are the other Devara Paadal Petra Sthalams nearby.