One among the 276 Devara Paadal Petra Shiva Sthalams, this temple is the third Shiva Sthalam on the Cauvery river's southern bank in Chola Naadu (Thenkarai). The Lord Shiva,who is revered in this temple, is a Swayambumurthy, or self-manifested. The temple faces east and has two corridors. Its Rajagopuram or main tower has 7 tiers. The last Maha Kumbabishekam or consecration ceremony was held in 2013, and before that, in 1998. 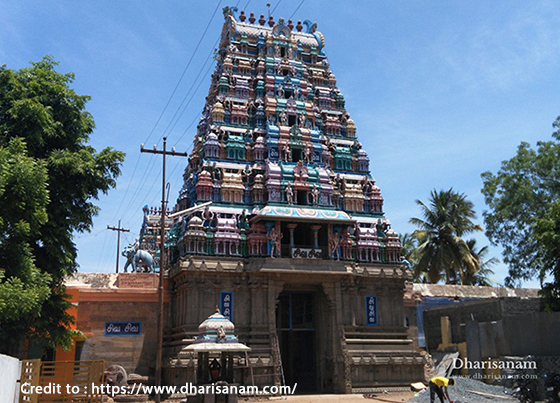 In the old days, it is believed that this region was densely covered with “Parai” trees. The Shiva Lingam worshipped here was found among these trees, and later, the temple was built around it. The Parai tree is also the temple’s Sthala Vriksham. Usually, it is seen that temples located on the banks of rivers have names that end in the word ‘thurai’. Since this temple is on the banks of the river, Cauvery, it is called Paraithurai. The Parai tree is called ‘Dharuka Vriksham’ in Sanskrit. This is why, historically, this place has come to be known as Dharukavanam. In this temple, there are 83 stone inscriptions which go back to the periods of Paranthaka Chola-I, Rajakesari Varman, Sundarapandiyan, and Krishnadeva Maharayar. The temple is run by the HR&CE (Hindu Religious and Charitable Endowments Dept. of the Tamil Nadu Govt.).

Once, there were some arrogant sages with big egos, in a place called Dharukavanam. They were so vain that they began to think that they were better than the gods. This annoyed Lord Shiva, who asked Lord Vishnu to assume the form of Mohini, a beautiful damsel, to distract the sages and disturb their penance. Vishnu did accordingly, and the sages could not do their penance properly as they were distracted by Mohini. Meanwhile, Lord Shiva appeared before the wives of the sages as Pikshandavar and asked them for alms. The sages’ wives were smitten by the handsome mendicant and began to follow him, love-struck. This was a big blow to the sages as they always used to claim that their wives were very pious and devout.

Eventually, the sages realized that all this was the handiwork of Lord Shiva. They became very angry and decided to kill Lord Shiva, using evil spirits and powerful mantras. But all their attempts failed, and they realized their mistake. They also realized that the mantras and Vedas were not to benefit themselves but for benefiting all humanity. Their pride, arrogance, and egos were vanquished. They went to Lord Shiva and surrendered before him, seeking his blessings. Kubera, Indra, and the Saptarishis are some of the people who have worshipped the Lord at this temple.

Apart from the shrines of Lord Shiva and his consort, Goddess Parvati, there are shrines and idols of Murugan with his consorts, Valampuri Vinayakar, Natarajar, Pikshandavar, Somaskandar, Gajalakshmi, Mahalakshmi, Pancha Bootha Lingams, Ayyanar, Saptamathas, Nalvar, Kangalamurthy, 63 Nayanmars, Mahavishnu, Durga Lakshmi, Bhairavar, and Navagraham. Idols of Dakshinamoorthy, Narthana Vinayakar, Ardhanareeswarar (instead of Lingothbavar), Durga, Brahma, and Chandikeswarar can be found in the place surrounding the sanctum sanctorum or ‘koshtam’.

In the hall or Mandap, Pikshandavar or Lord Shiva graces as the procession deity. On the mandap’s roof, are drawings of the 12 zodiac signs. The belief is that standing under the zodiac signs and worshipping Lord Shiva and Pikshandavar brings relief from the adverse effects of planetary placements in a person’s horoscope.

Lord Muruga’s idols are found in two separate shrines. One idol depicts him as Dandayuthapani, and the other has six faces. Lovely sculptures of Lord Oorthuva Dhandava Moorthy and Goddess Kali can be seen in the pillars in front of Parvati’s shrine. Like ‘Kadai Muzhukku’ in Mayiladuthurai, Thulasnanam or Theerthavari is held here on the first day of Aippasi month (Oct-Nov), in Cauvery river. Shiva and Parvati are taken on a Rishaba vahan for the ceremony on this day. Taking a holy dip here on this day can cleanse the sins of devotees.

Scupltures of Thirunavukkarasar, Thirugnanasambandhar, Manickavasagar, and V. V. Nagappa Chettiyar can be seen on the pillars of the Nandi mandapam hall. Chettiyar was the person who renovated the temple.

Doing meditation under the Sthala Vriksham here is believed to be very auspicious. Under the Sthala Vriksham, there is a Shivalingam too. Supposedly, Lord Suryan or the Sun worships the deity here, by directing his rays on the lingam every year on a certain day. This is the 18th day in Purattasi month (Sept-Oct). lord Vinayakar here is called ‘Parali Vinayakar’, and he blesses devotees from a shrine outside the main tower of the temple. A banyan or kallala tree forms the roof of Lord Dakshinamurthy’s shrine, and four sculpted lions are seen holding the four pillars. Usually, Lord Ardhanareeswarar’s idols are not depicted along with the bull or Rishaba, which is his mount or vehicle. But here one can see the bull also. This is a unique aspect of this temple.

Cauvery, which flows near the temple, is called ‘Akanda Cauvery’ (Akanda means ‘wide’ in Tamil). Saint Arunagirinathar has sung the praises of Lord Murugan of this temple in his famous work, Thiruppugazh. Others who have praised the Lord of this temple are the saints, Pattinathar and Manickavasagar. The Parai tree is believed to have many medicinal uses. Its leaves, sap, seeds, and roots are used to treat diseases like diarrhea, cancer, skin problems, snake bites, and bloody nose.

Worshipping Lord Shiva here is believed to bring relief for people who have skin ailments and cancer. People also worship here, seeking the Lord’s help for removing obstacles to marriage. Children who have speech impairments like stammering are brought here for a cure.

Many important festivals are celebrated here: