The Sanghi Temple remains as one of the modern religious attractions of the Hyderabad city, in Telangana state. The temple lies in Sanghi Nagar and is situated 25 kilometers away from the city of Hyderabad.

Any temple will typically be named after the deity to whom it is dedicated or will be known by the place it is located in. But instead, the Sanghi Temple carries the name of the group that has constructed it. It was developed by the Sanghi Group, the leading industrialists of South India, known for their benevolence, based at Hyderabad, and has since been known popularly in their name, as the Sanghi Temple.

The temple is dedicated principally to Sri Venkateshwara. 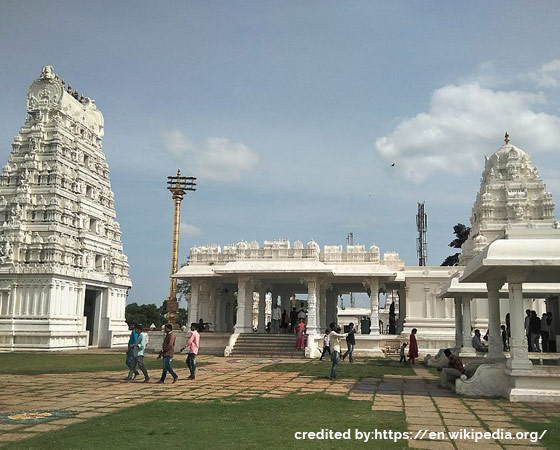 The Sanghi Temple is indeed a modern structure. It has been erected as a combination of the ancient architectural styles of the Cholas of the Tamil land, and the Chalukyas of the present-day Karnataka. This temple was built in the year 1991, and its construction was completed in a record time of only 18 months. This grand structure stands majestically on the Paramananda Giri hillock, slightly removed from the city.

The Sanghi temple remains a homogeneous mix of the old and the new. While its architecture and sculptures are modeled and designed on well-established styles of the ancient times, this essentially remains a place of worship meant for the present times.

Its Raja Gopuram, the main tower at the entrance, is fifteen feet tall and imposing and is visible from afar. The Vimanam is thirty-two feet in height. The presiding deity is Sri Venkateshwara, an aspect of the supreme God of protection and sustenance, Vishnu. His idol installed and worshipped in the sanctum sanctorum, is said to be very similar to that of the presiding deity of the very famous hill temple of Tirupati.

At the foot of the hill is the temple built for Sri Anjaneya. The temple has a flight of steps that lead to the top, with stone elephant heads that form the banister. A heavy, ornately carved door forms the entrance to the temple.

There are other temples situated in the complex, including that of Goddess Parvati, Sri Anjaneya, Shiva with Goddess Kamalambika, Goddess Durga, Sri Rama, Ganesha, and Kartikeya.

The Ashtalakshmi temple is located between that of Sri Venkateshwara and Goddess Padmavathi. Goddess Ashtalakshmi, in her eight forms, is seated on a lotus, and two of her hands signify the Abaya Mudra. The other two hands hold a lotus and a Vara Mudra (offering boon). Located close to the temple of Sri Venkateshwara is that of Sri Rama, with his consort Sita Devi, brother Lakshmana, and Sri Anjaneya.

The temple of Sri Vijayaganapathi, the remover of all obstacles, is next to that of Sri Rama. To the left of Sri Venkateshwara is the all-powerful Destroyer of the Trinity, Shiva, seated on a lotus, with the crescent moon adorning his head and a trident in his hand. Standing next to him is Goddess Shakti, Kamalambika. Located further away is the shrine of Goddess Durga, holding a lotus in her right hand. To the left of the Ganesha temple is that of Kartikeya’s.

The Navagraha deities are in an open temple in the complex.

The temple complex has a sacred garden known as the Pavithra Vanam. The flowers and leaves that this garden yields are used in decorating the idols and even in performing various rituals and prayers. In the Kalyana Mandapam, which forms part of this structure, marriages and other auspicious functions are performed with divine grace. The Mandapam has a raised platform with an ornate canopy built over it.

There are enough vantage points around, too, from where the visitors can appreciate the architectural splendor of the temple and enjoy its serene beauty. There is also a well-maintained lawn in front of the temple, where people can sit in leisure, relax, and enjoy the peace.

Located strategically on top of the Paramananda Giri hill, this vast temple complex thus appeals to anyone’s aesthetic sense. Hence it is no surprise that this place has become one of the extremely popular attractions, a religious site, as well as an important destination for tourists. The temple looks spectacular in the night, with its bright lights and well-lit lamps all around.

Many auspicious occasions are observed here and are celebrated as festivals. These include Sri Rama Navami, Krishna Janmashtami, Ganesh Chaturthi, Hanuman Jayanthi, and Dussehra. The annual Brahmotsavam is also celebrated here with devotion and enthusiasm.

How to Reach Sanghi Temple

The nearest airport is the Rajiv Gandhi International Airport, which lies 38 kilometers away from the temple.

The nearest bus station is at Sanghi Nagar, which lies 1 kilometer away from the temple.