Sri Rameshwar Temple or Ramanathaswamy Temple is one of the Jyothirlingams and is located in Rameshwaram, Tamilnadu. The consort of Lord Ramanathaswamy is Goddess Parvathavardhini in this shrine. It is known as Paadal Petra Stalam, which denotes that it is revered by the ancient poets and ardent devotees of Lord Shiva, who are all called “Nayanmars”. The word Ramanathan denotes that Lord Shiva is the prime deity and lord of Rama. This temple was built by Lord Rama, during his visit to south India, after his victory over Demon Ravana, who abducted his wife, Goddess Sita. The temple is highly mystical and is visited by a lot of devotees every day. It is regarded as one of the temples of Char Dham. 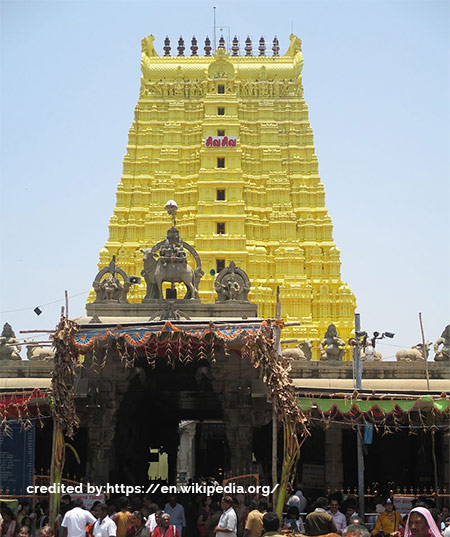 The temple is in Rameshwaram, which is one of the holy cities of India, and it was supposedly constructed during the pre-Vedic age. When Lord Rama visited the sacred place, he wanted to worship Lord Shiva, who was the mystical force behind the success of Lord Rama. Though Lord Rama was himself the incarnation of Lord Vishnu, there are several instances in Indian history, where several temples for Lord Shiva were built by Lord Vishnu himself. It is believed that Lord Rama instructed Lord Hanuman to bring a Lingam from the mountain of Himalayas, and when it got delayed, he made a Lingam with sand. This is the historical place where the bridge called Ramar Sethu was built across India and Srilanka.

The Architecture of Sri Rameshwar Temple:

The temple is very old and is built in the Dravidian style of architecture. It was originally constructed during the Pandya Dynasty and was renovated later by the Tamil Kings of Jaffna in Srilanka. The Setupatis of Ramanathapuram have contributed towards building this shrine. The Lingam made by Lord Rama is worshipped later, and the main worship is given to the Lingam brought by Lord Hanuman, which is called “ Vishvalingam”. The corridor of this temple is a testimony to architectural excellence. The hall is supported by pillars which have intricate carvings and stucco images. The temple stands in a huge complex and is surrounded by the compound walls on all four sides, which are made of granite stones. There are huge wells, where people would draw water from the well and bathe. The wells are called Vayu Theertham, Ram Theertham, Jatayu Theertham, and Lakshman Theertham.

Festivals like Shiva Ratri, Arudra Darshan, and Pradosham are celebrated here. Lord Shiva in this temple is highly revered by the people. This temple attracts a lot of devotees across the globe. Other important festivals celebrated in this temple are Deepavali, Navaratri, Makara Sankranthi, and Tamil New Year.

Lord Shiva shows his power of mysticism in this temple. His grace will bless the people, and help them to be relieved from the clutches of the birth-death cycle. People with malefic positions of Rahu and Ketu worship in this temple.

How to reach Sri Rameshwar Temple:

The nearest international airport is in Madurai, which is just 140 kilometers away from the temple.

The town of Rameshwaram is well connected to most of the cities. Local transport is available in plenty. The city offers frequent bus services and connects to most of the important cities.