The Ragigudda Sri Prasanna Anjaneya Swamy Temple lies in Jayanagar, a suburb of Bengaluru, the capital of Karnataka. The temple is dedicated to Sri Anjaneya and is spread out across five acres of land on a hillock. The temple lies amidst the serene green landscape surrounding the hillock. 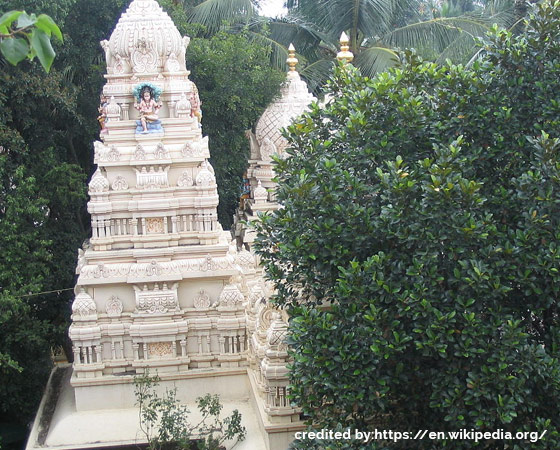 ‘Gudda’ means hillock in Kannada, and it is believed that the temple was formed from a heap of Ragi (finger millet). The temple henceforth came to be known as Ragigudda Temple. Legend has it that there was a lady called Sudharma, the wife of a local chieftain. She was very pious and good-hearted.

One day, the Trinity of Brahma, Vishnu, and Shiva appeared before her as visitors and asked for Bhiksha (alms). Moved by their plight, Sudharma gave them the newly harvested Raghava Dhanya or Ragi. She was reprimanded by her mother-in-law, who disapproved of Sudharma giving the Ragi away to visitors.

Sudharma said that if the visitors would not take the alms, then she too would have no requirement for the Ragi. The Trinity was pleased with her devotion and selflessness. They gave her darshan (sacred vision) and stated their wish to stay near the hillock. The Trinity turned themselves into three stones, which bear their engraving.

The temple was built in 1969 and registered in 1972. The temple has subsequently grown over time from a small idol to its current structure.

The hill that houses the primary deity of Sri Anjaneya is believed to have been formed from a mound of Ragi. Hence, the temple was named Ragigudda Temple. There is an archway denoting the path to the temple atop the hillock. There is an artificial waterfall (Hanuman Dhara) at the temple entrance that highlights the beauty of the hillock and the surroundings.

The principal deity in the temple is Sri Anjaneya, and a huge idol is housed in the main sanctum. The sanctum can be seen after climbing one hundred steps from the Sri Ganesha shrine. Sri Subramanya is seen at the entrance of the main temple. The presiding deity can be seen carrying the Dronagiri mountain in his hands that contained the Sanjeevani herbs. The deity is carved from black stone and sheathed in gold.

The temple also houses Sri Dakshineshwar, in the form of a Shiva Lingam made of Maragatham (greenstone) on the left side of the main sanctum, along with a shrine for Sri Rama, Sita Devi, Sri Lakshmana and Sri Anjaneya on the right side of the sanctum.

There is a small idol of Goddess Annapoorneshwari, opposite the Navagrahas. There are huge rock engravings at the side of the temple for the Trinity (Trimurti Sannidhi) of Brahma, Vishnu, and Shiva. They are formed of monolithic blocks 32 feet in height.

The Mandapam inside the temple is made from marble. The temple has a Pushkarni (holy water tank), and a separate division for Prasadam (holy offering).

Devotees offer rice to the deity of Goddess Annapoorneshwari. The rice is used for the daily Annadanam undertaken by the temple.

Sri Anjaneya is the very embodiment of Bhakti. His adoration for Sri Rama is absolute. For the past few decades, the temple has become a social center and has a charitable trust that offers free education and healthcare for the underprivileged in the locality. Two halls can be rented for functions. The bigger hall is a marriage hall called Pawan Dhama, which operates on a low budget providing the necessary services for marriages. The smaller hall is used for ceremonies like Upanayana, Seemantham, and other functions. The trust also supports a Gaushala (cow shed) that provides milk for poojas and the students. The premises have an auditorium which is used for conducting cultural activities and an amphitheater, which is mainly used during the festival of Hanuman Jayanthi.

The temple has a lift facility from the base to the top. The elderly and physically challenged people can avail of this facility at a minimal cost.

Every Saturday, the temple serves lunch to its devotees.

The temple celebrates Hanuman Jayanthi in a grand manner as a twelve-day festival in the months of November-December. Over 35,000 devotees attend the festival. The temple performs yagnas, Abishekams (holy bath), and poojas. Mahaprasadam is given to thousands of devotees. During this time, the temple hires several devotees as volunteers for carrying out various tasks. There is a huge fair held during the festival that provides livelihood to several families in South Bengaluru.

During Rathotsavam, the temple chariot is pulled by devotees.

How to Reach Ragigudda Temple

The closest airport to the temple is the Bengaluru International Airport.

The Jayanagar Metro Station is the closest to the temple.

Public bus facilities are available besides cab services that can be availed to reach the temple.