The Narasingam Yoga Narasimha Perumal temple lies in the village of Narasingam in Anamalai, Madurai district of Tamil Nadu. The temple lies 8 kilometers east of Madurai.

The Pandyas carved the temple out of a large rock, and the presiding deity Narasimha was carved out of the hill itself. The rock temple was constructed in 770 A.D. The skill of the sculptors during the Pandya reign can be seen in the carving of this rock temple and the idol of the presiding deity. The temple, also called Kodavarai Temple, was built by breaking an enormous piece of rock. This temple of Narasimha lies between two other holy spots – Alagar Koil in the north and Thirumohur in the east. 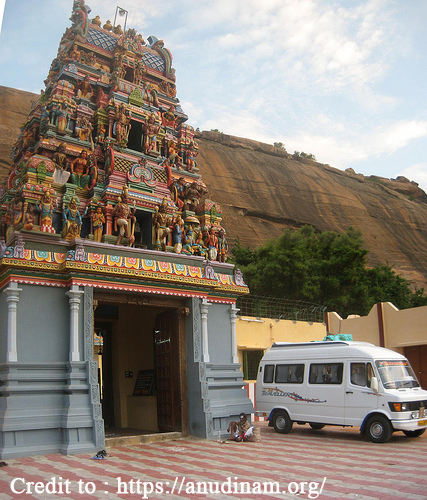 Legend has it that Sage Romasa installed the idol of Narasimha in a cave located in a hill, as per the Sthala Purana. According to the Brahmanda Purana, the sage did penance on the banks of the Padma Thadakam, near the Gajagiri Kshetram, filled with lotus flowers. He wanted God to appear in his Narasimha avatar. God appeared in his Ugra (fierce) form, and as the heat was unbearable, even the celestials prayed for him to calm down. They sought Prahlad’s help, and the latter managed to calm him to some extent.

The celestials prayed to Vishnu’s consort Goddess Mahalakshmi, who dwelt within him as Narasingavalli. Narasimha then became Yoga Narasimha. Narasimha granted the boon to Sage Romasa.

There is another myth stating that Shiva was afflicted with the Brahma Hathi Dosham after he chopped off one of the five heads of Brahma, the God of Creation. Shiva took a bath in the holy water there called Chakra Theertham and worshipped Narasimha. He was relieved of the Dosham.

According to the Thiruvilayadal Purana, the Chola king was not able to defeat the Pandya ruler and sought the help of the Jains. They created a giant elephant through the use of mystical powers to overthrow the Pandya ruler and crush his dynasty. The Pandya king prayed to Shiva to save him and his kingdom. Shiva sent him the Narasinga Asthra that turned the elephant into a hill. Marankaari, the minister of Madurai king, Parantaka Nedunjadaiyan, initiated the construction of the temple in 770 A.D., later completed by his brother, Maran Eyinan.

Vishnu has taken Dasah(ten) avatars. However, the rarest and most significant among them is the Narasimha avatar. Unlike the other avatars, which are single, the Narasimha avatar is dual - the face of a lion and body of a man. Narasimha is the fourth avatar and is said to be a Sathya Yuga avatar. At least fifteen Puranas have reference to Narasimha.

Unlike other avatars, this particular form had no prior preparations, and Narasimha appeared in a very savage manifestation. When the evil king Hiranyakashipu kicked a pillar scornfully, challenging his son Prahlad to confirm that his God Vishnu was omnipresent, Vishnu immediately made his presence felt. Narasimha avatar is a very robust and precious avatar, wherein God appears as a great Protector at the time of need.

This episode proves that God will come to the rescue of devotees who offer sincere prayers with devotion. This avatar is considered rare as the boon granted to the demon king Hirayakashipu was a rare one. Narasimha killed Hiranyakashipu with his nails, not a weapon. The killing took place at Pradosham time (twilight).

The foot of the hill, where the temple lies, is called Narasingam, Hasthagiri, or Gajagiri. The Pandyas have built a Maha Mandapam, a Garuda Mandapam and a Mukha Mandapam at the entrance. The shrine of Goddess Narasingavalli is facing South at the entry. The temple is renowned for the Utsava idol of Narasimha, found in a standing posture carrying the Sudarshana chakra and the Panchajanya in his upper hands. The lower hands hold the Gadha (mace), and the fourth hand shows the Abhaya Hastha (blessing posture). This idol is exceptional as the standing position does not exist in any other temple. The main deity is Yoga Narasimhar, with the face of a lion and Goddess Lakshmi in his heart.

The temple has inscriptions on it in Tamil, Vattezhuthu, and Brahmi. Inscriptions during the Pandya period between 1101– 1124 A.D. indicate gifts given to the temple. Another engraving specifies land gifts were made at Iyakkimangalam village to conduct the festival at the Annamalai temple.

The temple celebrates Swathi Thirumanjanam and Pradosha Thirumanjanam, two of the main festivals. The incarnation of Narasimha took place during Pradosham of the Krishna Paksha Chaturthi (the fourth day from Full Moon day). People offer special Abhisheka poojas to Narasimha during this period for betterment in education and business. The temple holds special poojas during the time of Swathi star (birth star of Narasimha).

The temple also celebrates Narasimha Jayanti. On every Maasi Pournami (full moon day), the Gajendra Moksham episode plays out. Thirumohur Kalamegha Perumal makes his annual visit to the Narasingam Yoga Narasimha Perumal Temple. The priests give a ritual oil bath or Abhisheka to Narasimha on this day. Circling the Girivalam (hill) is considered auspicious on Full Moon day.

The presiding deity bestows blessings on devotees offering sincere prayers. Devotees worship Narasimha for better education. They offer prayers for protection from enemies and even death. A person performing the Narasimha Pradosha pooja with full devotion can clear all hurdles in their marriage.

The Madurai International Airport is the nearest one.

Madurai has the nearest railway station.

There are buses from the Madurai Matthuthavani bus stand to the temple. Share auto facilities are also available.