Vishwaroopa Adhivyadhihara Sri Bhaktha Anjaneyaswami Temple lies around 10 km away from the heart of Chennai city, in an area known as Nanganallur. Most people refer to the temple as the Anjaneya Temple, as its name is derived from its chief deity, Lord Hanuman. He is also known as Anjaneya, as his mother is the Vanara (monkey) woman, Anjana. Hanuman is a principal character in the Hindu epic, Ramayana. It was Hanuman who was at the forefront of Sri Rama’s efforts to rescue his wife from the custody of the demon king of Sri Lanka, Ravana. Ravana had kidnapped Sita and taken her to his kingdom. The temple’s cornerstone was laid around 1989 by some devotees of Hanuman, who formed a group called Sri Maruti Bhakta Samajam. The temple was thrown open to the public in 1995. The most striking feature of the temple is the idol of Lord Hanuman, which is 32 feet tall. The idol was carved out of a single piece of granite stone.

The temple is recent in origin, so it lacks history. There are idols of Lord Rama and Lord Krishna, too, in the temple. Since Lord Hanuman is a deity who has a large following in south India, this temple attracts a large number of visitors who are devotees of the monkey god, who is the epitome of indomitable strength and courage. 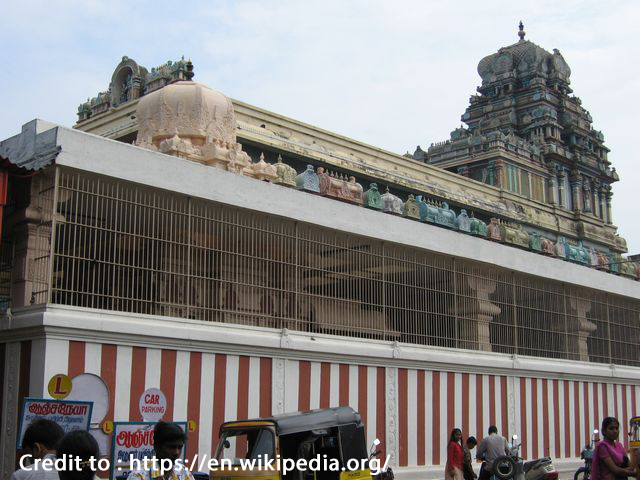 The Nanganallur Anjaneyar temple is not more than a couple of decades old. Hanuman, the deity enshrined here, is a major character in many Hindu mythological tales. He appears in both the major Hindu epics, the Ramayana and the Mahabharata. Inside the temple compound, one can see shrines for both Rama and Krishna. This is because Lord Hanuman is a part of the two great epics.

After featuring in the Ramayana, he appeared again in the Mahabharata in an episode where he encounters his half-brother, the Pandava prince, Bheema. Both were fathered by the Wind God, Vayu. Bheema’s mother was Kunti, the wife of the Pandava king, Pandu. As she could not bear children by Pandu, she had to invoke different gods like Indra, Vayu, and Dharmaraja, to have children. The two brothers ran into each other, when the Pandavas were in exile, after having lost the game of dice to their Kaurava cousins. Bheema was looking for a lake, which had certain fragrant flowers that his wife, Draupadi, wanted. Hanuman made a promise to Bheema that he would keep an eye out for the Pandavas, and sat on top of Arjuna's chariot during the war.

The Nanganallur Anjaneyar temple was established by a community comprising devotees of Lord Hanuman, called Sri Maruti Bhakta Samajam. They built the massive idol of the deity in 1989, and after the temple was built, the shrine and the idol were both consecrated in 1995. Since then, large numbers of devotees of Anjaneya have been thronging to the temple every year. Sri Raghavendra Swami and Sri Kanchi Paramacharyar were the two people who took a keen interest in building the temple. The temple is now managed by the Hindu Religious & Charitable Endowments Department.

The Architecture of Nanganallur Anjaneyar Temple

The huge idol of Lord Hanuman, carved out of a single granite stone, without any breakpoint or streamline, is the main attraction of the Nanganallur Anjaneyar temple. The imposing idol stands 322 feet tall. It is black in hue and towers over the other shrines in the temple complex. In height, It ranks only second to the idol of Hanuman at Panchavati (near Puducherry) in terms of height.

The temple tower of the deity is also very high, almost 90 feet. The sanctum sanctorum is connected to the other shrines in the complex via corridors. There is a shrine for Sri Rama, Lakshmana, and Sita. Rama is always connected with Hanuman, and his presence is a given in any temple for Hanuman. Rama is depicted as the ruler and protector here; in the form, that Hanuman worships and respects. Rama carries a bow and is called Kothanda Rama. To acknowledge the fact that Hanuman was present in the Mahabharata as well, a shrine for Lord Krishna was also built. Krishna’s two consorts, Rukmini and Satyabhama, can also be seen alongside him. To save Arjuna's chariot from harm, during the Kurukshetra war, Hanuman graced the chariot’s flag, according to the Mahabharata.

There are two smaller shrines in the north-east part of the temple. One is for Lord Ganesha, and to its left, on another platform, is one for Naga or the snake god. Saint Raghavendra is also present, facing Krishna’s shrine. There is a large hall or mandapam for devotees to stand and pray to the deity. It can accommodate a lot of people.

Five major festivals are celebrated with great pomp in the temple. The most important is Hanuman Jayanthi, the birthday of Lord Hanuman, and the second most important is Ramnavami, which is the birth anniversary of Lord Rama. The nine-day Navaratri festival and Vijayadashami are also celebrated here. Other festivals include Sri Krishna Jayanti, the birthday of Lord Krishna, and Pavitrotsavam.