Built in the Dravidian style of architecture, Namakkal Anjaneyar temple is in Namakkal town in Namakkal district, which is in Tamil Nadu. This temple is dedicated to Lord Hanuman, a Hindu god. Hanuman is a Vanara or monkey god. He was the son of a Vanara woman, Anjana, and Vayu, the Wind God. Hanuman is a key character in the Hindu epic, Ramayana. He is instrumental in helping Sri Rama rescue his wife, Sita, from Lanka, where she was held in captivity by the demon king of Lanka, Ravana. Hanuman was a great devotee of Sri Rama and was known for his strength and valor. Today, he is seen as an embodiment of these attributes, and those who wish to acquire courage and confidence believe that worshipping Hanuman would help them acquire such traits. The Hanuman Chalisa is a hymn that invokes Lord Hanuman, and it is chanted by those who wish to overcome various fears and negative energies. Even the malefic planet Saturn is believed to fear Hanuman, who protects his devotees from its adverse effects. 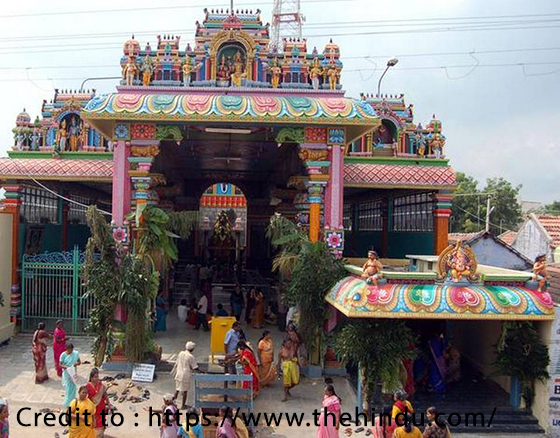 The legend associated with this temple is related to Narasimha, an avatar of Lord Vishnu, his consort, Lakshmi, and Hanuman. A demon named Hiranyakashipu obtained a boon from Brahma that made him invincible. Because of the boon, he could not be killed by any human being, and neither could be killed in the morning, noon or night. He could not be killed on land, water, or in the air either. After getting the boon, Hiranyakashipu became very arrogant and started harassing the Devas, with impunity. He had a son called Prahlada who was, ironically, an ardent devotee of Vishnu. Hiranyakashipu did not approve of this and tried his best to dissuade his son from worshipping Vishnu. But all his entreaties and threats were of no avail, and Prahlad continued to worship Lord Vishnu. An enraged Hiranyakashipu even went to the extent of trying to kill Prahlad but each time, the boy was saved by the divine grace of the Lord. One day, during a heated argument with his son, Hiranyakasipu demanded to know if Vishnu was present everywhere, as his son claimed. In a fit of anger, he struck a pillar with his mace to split it open and prove to his son that Vishnu was not in it. At that very moment, the pillar split open, and Vishnu emerged from it in the form of Narasimha, half-man and half-lion. He killed Hiranyakashipu during twilight, when it was neither morning, noon, or night, and on the threshold of his palace, which was neither on land, water, nor air. In this manner, he circumvented the boon that Brahma had given the demon .

After many ages passed by, Lakshmi, the consort of Vishnu, happened to be doing penance at this place, when she saw Hanuman, also called Anjaneyar, bearing an image made of Saligrama. Lakshmi asked him to get her one of Vishnu in his Narasimha form.

Hanuman handed over the Saligrama to her and requested her to hold it till he came back. Lakshmi placed the image at this location, which grew into a mount before Hanuman returned. Then Narasimha appeared before the two of them and took up abode here.

The Narasimhaswamy temple, which lies at the foothills, is also linked to this legend, and it is believed that Hanuman worshipped him, axially, in standing posture from a distance.

The Architecture of Namakkal Anjaneyar Temple

The idol of Anjaneyar is 18 ft (5.5 m) tall, and this makes it one of the tallest Hanuman idols in India. The temple has a hall, with many pillars, that leads to the sanctum. It has a flat gateway tower. The sanctum contains the idol of 18 ft (5.5 m) Anjaneyar, which faces axially, the Narasimha shrine in the foothills, which is 130 m (430 ft) away. The Anjaneyar idol was carved out of a single stone and is believed to have been in existence since the 5th century. The sanctum has no roof over it, and the iconography of Anjaneyar is rather unique. He can be seen with a sword in his waist and in his hand is a garland made of Saligrama.

Poojas or rituals are performed daily and during festival times by the temple priests. The rituals are usually performed four times a day, at 8:00 a.m , 12:00 p.m., 6:00 p.m., and 8:45 p.m. Each ritual for the presiding deities is done in three stages: alangaram (decoration), neivethanam (food offering) and deepa aradanai (waving of lamps).

Rituals are performed on a weekly, monthly, and fortnightly basis, here. The temple is open to the public from 6:30 am – 1:00 pm, and also from 4:30 – 9:00 pm on all days. However, on festive occasions, the timings are extended.

The temple is located in Namakkal, at the bottom of Namakkal hill. It lies on the road from Namakkal to Salem. There are four daily rituals, as well as many yearly festivals at the temple. Among these, the fifteen-day Panguni Uthiram festival celebrated in Panguni month (March – April) is very important. On this occasion, the idols of the presiding deities are circumambulated around the streets near the temple.

Salem Airport is the nearest airport. It is 60 km from Namakkal. Coimbatore International airport is 160 km, and Trichy airport is 90 km.

Namakkal is located on the national highway. It is 50 km from Salem and 45 Km from Karur.