Murudeshwar has assumed national and even international fame for its magnificent Shiva temple. This is dedicated to Shiva and the idol is regarded as the second tallest of Shiva in the world, with the tallest being in Nepal. This holy place of worship is also situated in a picturesque location right on the seashore and falls in the southern state of Karnataka. Murudeshwar falls on the Konkan railway route that runs between Mumbai and Mangaluru.

The quaint town of Murudeshwar is in the Bhatkal Taluk of the Uttara Kannada district of Karnataka. It lies right on the coast of the Arabian Sea, which borders three sides of the temple, along the western coast of peninsular India. 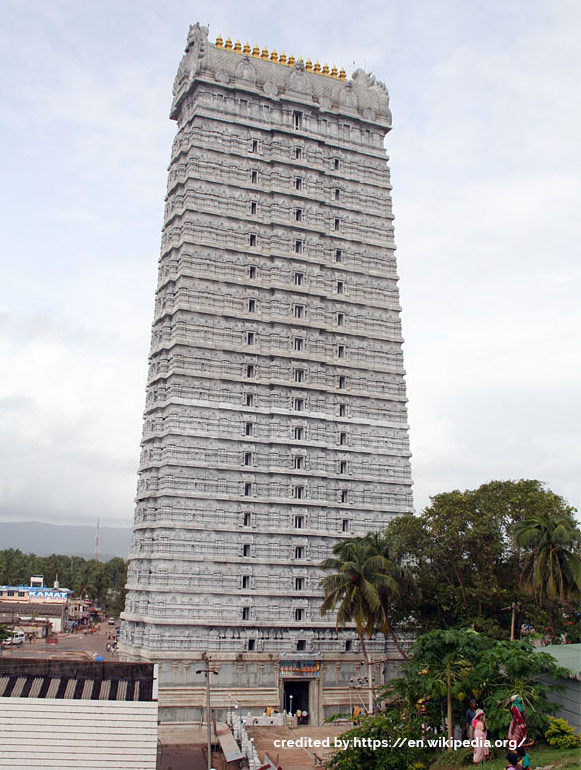 The legend surrounding Murudeshwar links the place with Ravana, the principal antagonist of the epic Ramayana.

Ravana was an ardent devotee of Shiva. Atma Linga was a divine manifestation of Shiva and was believed to bestow invincibility and immortality on anyone who worshiped it. With a view of obtaining the Atma Linga so that he could become all-powerful and eternal, Ravana did severe penance and prayed to Shiva for the Linga. Shiva was pleased and granted him his wish and gave away the invaluable Atma Linga to him, on the condition that it should not be placed anywhere on earth until he reached his capital, Lanka. The overjoyed king of Lanka agreed and started with his prized possession towards his kingdom.

But Vishnu, the supreme protector of the universe, got worried that with Atma Linga in his possession, Ravana could play havoc on heaven and earth. So, he took the help of Ganesha and worked out a plan to foil Ravana’s designs. Ravana, being very devout, used to perform worship at various times of the day, without fail, and the Gods Vishnu and Ganesha, decided to use this practice to their advantage.

When Ravana was passing through Gokarna, Vishnu blocked the sunlight and made it appear that the Sun had set. Ravana took it as the twilight time and set out to perform the evening rituals. But with the Atma Linga in his hands, he was unable to perform worship and stood there, worried. Precisely at that moment, Ganesha appeared before him as a Brahmin boy, and agreed to Ravana’s request to hold the Linga for him and not to leave it on the ground, till he completed his oblations. But this too came under a condition; that the boy would call out Ravana’s name thrice, and the king of Lanka should come within that time and take the Linga back from him; otherwise he would keep it on the ground. Ravana had no option but to agree.

But when he returned after finishing his worship, Ravana found the Linga placed on the ground, while the boy was nowhere to be seen. At that very moment, Vishnu removed the illusory covering, and the Sun started shining brightly again. Realizing that he had been fooled, the mighty Ravana used all his powers to lift or uproot the Linga and take it with him. But all his efforts went in vain, as the Linga remained firmly fixed on earth at that very place.

Frustration drove Ravana to use immense force on the Atma Linga idol of his favorite God, and in the process, it began disintegrating to some extent. Some of its pieces got scattered in many places. And all these spots where the small pieces or parts of the Linga fell, became holy and turned into Shiva temples. The temples for the Lord that have come up in the present-day Surathkal, Sajjeshwar, Gunavanthe, and Shareshwar are said to be some among those.

At last, having failed in all his attempts, Ravana is said to have thrown away the cloth covering of the Atma Linga, and it fell on the hill Kanduka Giri, at a place called Mrideshwar. This place thus became a holy abode of Shiva, and in due course, began to be called Murudeshwar, after the construction of the temple was complete.

Murudeshwar is one of the forms of Shiva. While the Murudeshwar temple boasts of the world’s second-tallest Shiva idol, it is also equally well-known for its imposing Raja Gopuram, its main tower. The temple complex, as such stands majestically on the Kanduka hills and is surrounded on all the three sides by the Arabian Sea. It offers a breathtaking view. Shiva, whose idol is 123 feet tall, is seen here with four hands and seated in Padmasana posture.

The massive spire, the Gopuram at the entrance, is twenty-storied and towers to a height of 237.5 feet, and the life-size statues of two elephants stand guarding the tower in front, adding to its magnificence. One can go up the tower with the help of the lift installed therein and enjoy an awe-inspiring view of the Shiva idol with the Arabian Sea forming its natural backdrop.

The main deity of the temple is a Linga and is called Sri Mridesa Linga or as Murudeshwar. He is found in the sanctum as a rough rock, settled inside a hollowed space in the ground. Regarded as a piece of the original and sacred Atma Linga, this can be found at about two feet below the ground level. The deity is generally viewed in the light provided by the oil lamps lit by the priests, and the devotees can have his darshan from the entrance of the sanctum. This main shrine is still retained in its traditional form and hence remains dark, while all other parts of the temple, as such, are modernized.

The temple is also full of intricate and exquisite carvings that add to the majesty and appeal of this religious structure. The temple is mainly built of granite.

Further, the Rameshwara Linga can be worshipped at the bottom of the hill. A Shaneeshwar temple has also been built there. There are also statues depicting the Sun Chariot, Geetha Upadesham of Krishna, Ravana handing over Atma Linga to Ganesha, and Ganga descending on earth, all around the complex, which has a park and pool too.

Shiva had given the Atma Linga that resides in his heart, as a gift to Ravana, king of Lanka, for his penance. The temple features the cloth that covered the Atma Linga, which a furious Ravana threw away and which landed in Mrideshwar that later came to be known as Murudeshwar. According to Hindu scriptures, all Gods attained immortality and invincibility after worshipping Shiva.

The highlight of the temple is the mammoth idol of Shiva, which has been built and placed in such a manner that the rays of the Sun first fall on the idol. This is the second tallest idol of Shiva, after the Kailash Nath Mahadev idol in Nepal. Inside the main temple is a lamp that burns even today ever since the temple was built. People pour oil into the Deep (lamp) for blessings of prosperity and good luck and can see their image in the oil.

The immense Gopuram is believed to be the second tallest in the world at the height of 237.5 feet. The tallest Gopuram is in Srirangam Temple, Tamil Nadu.

How to Reach Murudeshwar Temple

The nearest airport is the Mangalore International Airport, which lies 153 kilometers away from the temple.

The nearest railway station is the Murudeshwar Junction, which lies over 2 kilometers east of the town.

State and private buses frequently ply to and from Murudeshwar from Bengaluru, Mysuru, Udupi, Kochi, and Mumbai.