The Mopidevi temple lies around 70 kilometers from Vijayawada in Andhra Pradesh, in the village of Mopidevi. It is also called the Subramanyeswar Swamy temple where the deity is in the form of a Shiva Lingam. The Lord is Swayambhu(self-manifested). 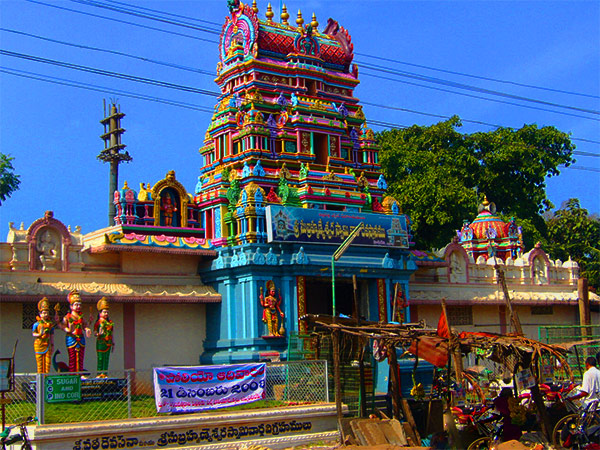 According to legend, four Deva Rishis (sages) Sankara, Sanakasa, Sanatkumara, and Sanatsujata were immortal and appeared as little children of five years of age. The Deva Rishis had immense knowledge and devotion and were unaware of the world around them, so much so that they were unaware of not being clothed. One day, they visited Kailasa, the abode of Shiva, to worship him. Sachi Devi, Swaha Devi, Goddess Saraswathi, and Goddess Lakshmi also arrived at the same time.

The child Subramanyeswara was seated on the lap of his mother Goddess Parvati, and upon seeing the contrast between the fully clad Goddesses and the naked Deva Rishis, he was bewildered. Not knowing what to do, he started giggling, and his mother rebuked him for his behavior. Later, Subramanyeswar realized his folly and took permission to do penance for many years, disguised in the form of a snake. The site where Subramanyeswar did penance was later known as Mopidevi. Subramanyeswar Swamy, the presiding deity in the form of the Shiva Lingam, is called the God of Snakes.

The pot-maker shared his dream with the villagers the next day. They went to the anthill and started digging the soil. To their surprise, they found a Swayambhu Lingam. Parvathalu constructed some more idols of Nandi, Garuda, and the Cock in clay, as they are very dear to Subramanyeswar Swamy. He then baked the deities in the Bhatti (furnace) so that the clay idols became hard and retained their shape.

Ancient texts state that the mighty Vindhya mountain, which lies between North and South India, became aware of its strength and started growing towards the sky. It reached the Sun, and the atmosphere became dark. Mortals, as well as immortals, flora, and fauna, suffered due to the darkness. The Devtas prayed to Sage Agasthya to make the Vindhya mountain see reason and make it humble.

Sage Agasthya was in Varanasi at the time of the crisis, and he agreed to address the situation. He traveled towards South India. Once the Vindhya mountain realized the sage had arrived, it reduced to its original size and made way for the great sage, who made the Vindhya mountain promise that it would retain the original size until he returned. But Sage Agasthya chose to settle in South India. Mount Vindhya waited a long time for the sage, but he never returned.

The Vindhya mountain has remained the same size even today. The great sage passed through the region with his disciples, where Subramanyeswar did severe penance and became a Lingam. The sage identified the place and said there were tigers. He added that if they went in the eastern direction, they would find the temple of Subramanya known as Subramanyeswar Swamy Temple.

Sri Subramanyeswar Swamy is the principal deity for the royal family of Challapalli, which runs the temple at present. There is another temple lying beside the Mopidevi Temple, the Sri Sakaleswara Swamy temple, which has a Swayambhu (self-manifested) Shiva Lingam. The temple derives the name from Sagara Chakravarthy, the grandfather of Sri Rama, who worshipped this Lingam. People discovered the Lingam when floods washed the Mopidevi village in 1783. Adusumilli Gangubhotlu, the landlord of the region, later constructed the temple. The Adusumulli family runs the Sri Sakaleswara Swamy temple at present.

Benefits of Worshipping in Mopidevi Temple

The temple performs some of the essential poojas that include the Sarpa Dosha Nivarana Pooja, Rahu Ketu Dosha Pooja, and Anapathya Dosha Pooja for curing specific health issues related to vision, ear infections and skin- related diseases. People seeking a suitable life-partner have their wish fulfilled here. They make offerings of Pongal made from rice and jaggery as Prasadam to Subramanyeswar Swamy. The temple performs Annaprashanam (an infant’s first intake of food apart from milk).

How to Reach Mopidevi Temple

The Vijayawada International Airport at Gannavaram is located 63.8 kilometers away from the Mopidevi Temple.

Several buses are plying from Avanigadda to Vijayawada. The Andhra Pradesh State Road Transport Corporation provides special bus services for devotees. The buses go through Mopidevi, and pilgrims can alight here. The Repalle Bus Station lies just 12 kilometers away from the temple.