Mantralayam is a famous pilgrim center. Although called the Mantralayam Temple in common parlance, this place is unique in many respects. For, this is not a temple in the usual sense of the word, dedicated to any God or Goddess, where his or her idol is installed and worshipped. Instead, this is what is known as the Brindavan. That is, this is the tomb of a great 17th Century saint, Sri Raghavendra Swamy. This tomb is no ordinary one, too, because this saint attained Samadhi, that is, was entombed, fully alive, and on his own volition.

Once an unknown village, Mantralayam has since become a highly revered holy place and a popular place of worship, visited by thousands of people from India and abroad, around the year. This is located on the banks of the Tungabhadra river in the Kurnool district of the state of Andhra Pradesh. 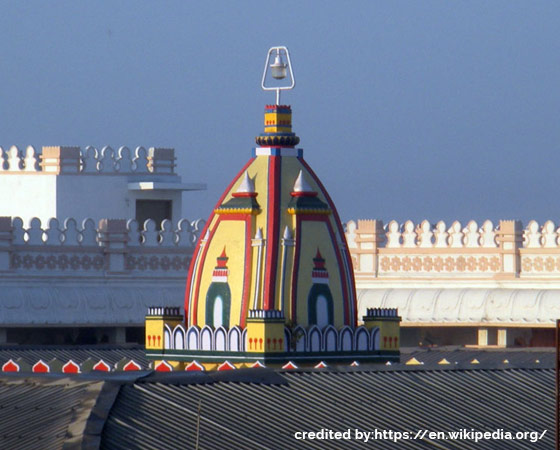 Raghavendra Tirtha, more popularly known as Raghavendra Swamigal or simply, as the saint of Mantralayam, was a great scholar and saint, who lived in the 16th- 17th century.

He was born in a place called Bhuvanagiri in Tamil Nadu in a Madhva Brahmin family, in the year 1595, as Venkatanatha. His family comprised of scholars and musicians, and hence it was no surprise that he, too, was very learned and possessed an inherent interest in music. He lost his father early in life, continued his education n Madurai, and got married later.

He was not only scholarly, but had a mastery over his subjects, and acquired a rare insight into them. He also had a sharp intellect and possessed immense debating skills. All these brought Venkatanatha to the notice of Sudhindra Thirtha, the pontiff of the then Kumbakonam Madhva mutt. Deeply impressed with the brilliance of this youngster and the spiritual aura that he exuded the pontiff wanted Venkatanatha to succeed him as the head of the mutt.

But for this to happen, the young man was required to give up his family life and become a Sanyasi, a monk. Venkatanatha, already a householder with a wife and a son, was extremely reluctant to take this crucial step at that stage of his life. But the elders prevailed upon him, and changed his mind gradually, over time, and made him agree to the wishes of Sudhindra Thirtha. And ultimately, Venkatanatha accepted monkhood in the year 1621. After the death of Sudhindra Thirtha, he succeeded him as the pontiff of the mutt, assuming the name Raghavendra Tirtha.

As the head of the mutt, Raghavendra Tirtha traveled widely, propounding the philosophy of Dvaita Siddhanta, spreading the message of Dharma, the right code of conduct among the people, and establishing the Godly order around. His preachings were based on Vaishnavism and that of Madhavacharya. He also undertook pilgrimages to many sacred places like Udupi, Kolhapur, and Bijapur, falling mainly in the present-day Karnataka and Maharashtra. His name and fame spread, and people flocked to him, seeking a cure for their illnesses and relief from their grievances. He gave them sagely advice and guided them in the virtuous path so that they could get rid of their sins and live a contented life in this world, while also preparing themselves to walk the path towards salvation. It is widely believed that he performed many miracles with the help of his spiritual powers, for solving the problems of people who took refuge in him and bringing them succor. Soon many became his disciples, while many more became his ardent devotees.

Then the Governor of Adoni presented him the Mantralayam village, as per the saint’s wishes, where Raghavendra Swamy settled down with the help of the grants received from Dodda Kempadevaraja. In was he, who is said to have identified this place on the Tungabhadra river banks as his final resting place and made his decision to stay there, accordingly.

Later, in the year 1671, he decided to give up his ‘mortal coil’ voluntarily. As per traditional accounts, Raghavendra Swamy pre-decided the day and time of his Samadhi and advised his disciples to build around him a tomb. Accordingly, at the appointed moment, he entered the state of Samadhi in a seated posture, and his disciples built a stone tomb around and above him. This is worshipped as the Brindavan, the final resting place of the saint.

Raghavendra Swamy is believed to be still living in his Brindavan and showering his blessings on the devotees and others from there. It is said that he even appeared before the then British Collector of Bellary, Thomas Munroe, in the year 1801, and that this incident is on the official record.

Raghavendra Swamy is widely believed to be an incarnation of Prahlada, the ardent devotee of Vishnu. At the same time, he remained a devotee of Sri Moola Rama and Panchamukhya Prana Devaru, the five-faced Lord Hanuman.

These apart, he was also an erudite scholar who authored many works on philosophy, religion, and ancient scriptures. He was an accomplished Veena player and has composed many songs in praise of the various divinities.

The Mantralayam Temple, located on the banks of river Tungabhadra, is dedicated to Saint Raghavendra Swamy, where his Brindavan, the sacred tomb, is worshipped as the presiding deity. It is a stone structure, believed to have been erected around his mortal frame. This is well decorated and ceremonial worships are conducted regularly to this Brindavan, at various times of the day, as per the laid down norms. The Mantralayam temple has arisen around this tomb.

The Mantralayam Temple is not only the Samadhi of the revered Hindu saint but also offers worship to Hari, Vayu, and Rayaru. The chariot procession is an important ceremony. In this, the divine idols are taken in procession around the temple in decorated chariots, made of sandalwood, and decorated with flowers every day.

While Sri Raghavendra Swamy is said to have performed many miracles during his lifetime, devotees claim that he is performing many amazing feats even today from his Brindavan in Mantralayam.

The cleansing of Raghavendra Brindavan takes place at 06.00 a.m. every morning with holy water. During Mangala Aarti, anointment and adornment with precious jewels and clothes are done. Mantrashakta is performed from 10.00 a.m. to 11.30 a.m. The Mahapooja, Moola Rama, Mukhyaprana, and Brindavana are performed at noon. Poojas are also done to the idols of Sri Moola Rama and Sri Hanuman.

The temple offers Tirtha Prasad (lunch) between 01.00 p.m. to 03.00 p.m. Sandhya Bhoga (dinner) is occasionally offered after 08.00 p.m. Devotees are supposed to come to the temple only in traditional clothes. At the same time, men are further required not to wear any upper garment.

The temple celebrates the Maharathostavam with great pomp and splendor. The temple also celebrates with equal zeal the Sri Raghavendra Swamy Aradhanostavam festival. The temple considers the Dhanurmasa (December-January) a very significant period during which special events like Tulasi Archana, Hastodaka, Rathotsava, and Maha Mangal Aarti are performed.

How to Reach Mantralayam Temple

The nearest airport is the Rajiv Gandhi International Airport at Hyderabad, which lies 236 kilometers away from Mantralayam.

The nearest railway station is the Mantralayam Road Station, which lies 12 kilometers away from Mantralayam.