A temple dedicated to Shiva lies in the Mahadeva Malai Hills in Kankuppam village, Vellore district, Tamil Nadu. The temple lies to the west of Katpadi. It is situated on the hill-top, which is of a single stone. The temple is called Mahadeva Malai Temple, which was built by a trader of the Pandya kingdom. The temple is believed to be five hundred years old. The consort of Shiva in this temple is Goddess Kamakshi. 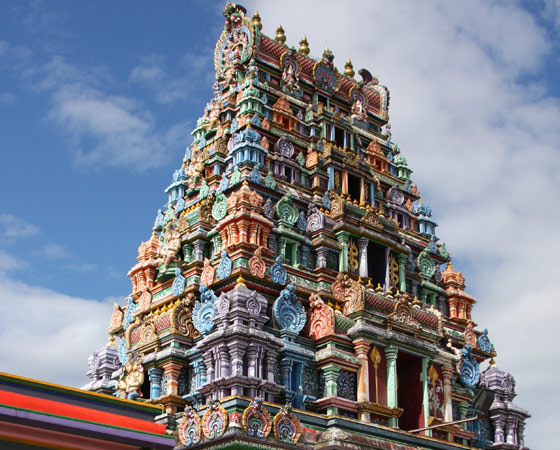 According to legend, there was a merchant who was an ardent devotee of Shiva. He prayed to have a Darshan (sacred vision) of Shiva. He was asked to visit Kalahasthi on Maha Shivratri day. The merchant left for the pilgrimage, and he reached a place called K.V. Kuppam. He made enquiries there for the route to Kalahasthi. He was informed that he was far away from his destination. It was already Maha Shivratri that day. The merchant was in despair and disappointed that he would be unable to reach Kalahasthi in time for the festival. An elderly man approached the trader and promised him a view of God. The two men reached a hill. The elderly man turned out to be Shiva, and he directed the merchant to build a temple there. The village where the merchant had met Shiva later came to be called Keezh Vazhi Thunai Kuppam.

There was a merchant in the turmeric trade, born in Dharmapuri district on December 6, 1930. He was Mahananda Siddha.

By the age of thirty-five, he was inspired by the Supreme deity Shiva and undertook the renovation of several temples across Tamil Nadu. He also started Annadhanam (feeding) the poor at the Lokuvakulam Bhradwajeeswarar temple at Kalahasthi in Andhra Pradesh. On the night of December 25, 2002, Shiva appeared in his dream. He told Mahananda that he was lucky to have been born a Siddha who would live for a thousand years. He directed him to proceed to Mahadeva Mount and live in a cave. “Worship me and protect the devotees,” said Shiva and disappeared.

Mahananda Siddha, on the instructions of Shiva, went to Mahadeva Mount, where Shiva appeared before him again. Shiva directed him to cleanse himself only on the first day of Chithirai. He asked him not to seek alms from anyone as all the wealth was accumulated there. Mahananda Siddha had to protect the living creatures on the mountain from disease and suffering. Also, he could not eat food to appease his hunger or drink water to quench his thirst. Shiva disappeared once again after advising Mahananda Siddha.

Mahananda Siddha has proved that it is possible to live without food. He has not partaken of food and water for several years. He is a Siddha who meditates by lying on fire to receive Prana, and the Amrita (nectar) flows from his mouth to feed his body. He worships the idol of Shiva with the fragrance of fresh flowers and leaves. The shape of Mahananda Swami’s head is similar to the serpent with five heads, on the head of Shiva. Mahananda Swami has built steps so that devotees can climb the hill to visit the Shiva temple. He provides food to hundreds of devotees daily.

The temple has been built in the Dravidian style of architecture. The presiding deity is Shiva. His consort is Goddess Kamakshi.

A huge idol of Dakshinamoorthy has been installed. There is an idol of Kali Amman also in the temple. The Dwajasthambam stands in front of the Mandapam. A meditation hall has been built. There is a temple tank on the premises.

There is an arch that welcomes visitors to the temple at the 19th kilometer on the Gudiyatham highway west of Katpadi. From the Gudiyatham town, the welcome arch to Mahadeva Mount is situated 11 kilometers on the way to Katpadi.

The presiding deity, which is the Shiva Lingam and the Nandi, are both Swayambu (self-manifested). The temple has a peaceful atmosphere, and many devotees observe they have peace of mind when they visit the temple. They get positive vibrations when they are in the temple premises.

Devotees visit the Mahadeva Malai Temple to seek Moksha (salvation). The people suffering from ailments and diseases visit this temple and make offerings to Shiva to be cured of diseases and ailments. People in financial distress or facing monetary issues visit the temple and offer prayers to Shiva to help them overcome financial obstacles. Others come to pray for knowledge and academic prowess. Some devotees offer prayers and pooja before they purchase vehicles.

The temple celebrates the Maha Shivratri festival on a grand scale every year in February-March.

How to Reach Mahadeva Malai Temple

There is a motorable Ghat road that reaches the temple. Both two-wheelers and four-wheelers can travel up this road to the temple.

The nearest bus stand is the Mahadeva Malai Bus Stand, located 1.5 kilometers from the temple.