Kundrathur Murugan Temple is in Kundrathur, a suburb of Chennai. It lies in the Kancheepuram district of Tamil Nadu. The presiding deity is Lord Murugan, who is the son of Lord Shiva and Goddess Parvati. Murugan is known by many names – Kartikeya ("son of Krittika"), Kumara ("child or son"), Shanmukha ("one with six faces"), Skanda ("attacker"), etc. He is the patron deity of Tamil Nadu and the youthful God of war. He enjoys immense popularity among Tamil Hindus and is worshiped mostly in places with a sizeable Tamil population, including Sri Lanka and Malaysia.

Murugan was the commander of the demi-gods who led the army of the devas against the demons and defeated them. He sojourned at six places during the epic battle against the demon, Surapadman. These six sites are Swamimalai, Tiruttanikai, Tiruvavinankudi (Palani), Tiruppamkundram, Pazhamudirsolai, and Tiruchendur. At each one of these sites, there are ancient temples which have been glorified in the Tamil poems of Tirumurugaatruppadai. This belongs to the Sangam period (c. the third century C.E.). Together, these six sites are known as "Arupadai Veedu" which means ‘the six battle camps of the Lord’.

In many Hindu mythological tales, Murugan is represented as a bachelor. Most of the major events in his life occurred during his youth. The legends about his birth are also popular. Hence, Murugan is often revered as a child-God, the same way Lord Krishna is worshipped in north India. Some Hindu myths claim that he has two wives, Valli and Deivanai. 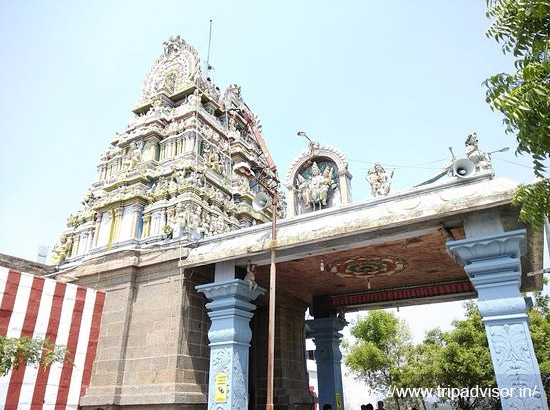 Hindu mythology states that Murugan stayed on the hill while traveling from Tiruporur to Tiruttanigai. This place is also called South Thanigai, as the Lord is shown facing the northern direction, facing Thanigai.

This is the sole Murugan temple in Tamil Nadu, where the Lord can be seen standing in a north- facing direction. The temple was constructed by the Chola king, Kulothunga Chola II. The unique feature of this temple is that the Lord can be seen only with one Goddess at a time, despite the fact that both the Goddesses are present with him. When viewed from one side, we can see Muruga with Goddess Valli, and when viewed from the other side, we can see him with Goddess Deivanai. To reach this hill temple, one has to climb 84 steps.

As per mythology, Lord Murugan worshipped a Shiva linga at this place before reaching Tiruttani. An asura called Tharagasuran was harassing the Devas. Murugan marshalled his army and waged a fierce battle with him at Thiruporur, and defeated him. After the war, the Lord desired to go to Tiruttani to become calm again. En route to Tiruttani, he glimpsed a small hillock and decided to rest there for a few days. While staying at the hillock, he made a Shiva linga and worshipped it every day. This Shiva is known as Kandhazheswarar, and the linga can be found at the foothills of Kundrathur. He is called so because Kandan (Murugan) worshipped him. Later, the great Chola king, Kulothunga II, built the temple at this place. There is a separate shrine for Lord Shiva, worshiped by Lord Muruga. A Tamil saying goes that wherever there is a mountain hillock or mountain, Lord Murugan could be found there. After some days, Murugan left this place and went to Tiruttani, where he took up residence.

The renowned poet, Sekkizhar, who was also the chief minister of Kulothunga Chola II, was born in this place, where the temple came up. After resigning from the ministry, he penned the work, Periyapuranam. He had a younger brother, Palaravayar, who dug a water tank near his house. This tank is now known as Palaravayar Kulam.

Devotees visit the temple for various reasons. Those who are facing delays in marriage pray to Muruga for removing obstacles to marriage. For this purpose, they perform Abishekams and also a wedding ceremony for the Lord. Some offer vastras or clothes. A huge fig tree can be found in this temple. People who lack progeny come to the temple and tie a cradle on this sacred tree. Once their wishes are fulfilled, and a child is born, they return to the temple and make offerings of fruit or sugar, equivalent to the baby’s weight. Sometimes, a devotee’s child may suffer from some ailment. In such cases, too, parents visit the temple pray to the Lord for their child’s health. Vibhuti or sacred ash is the prasad given to the devotees.

Many important festivals are held in this temple. They include:

Skanda Sashti is a very major festival here. It is celebrated for a period of eight days. While Soora Samharam, the event of Surapadman’s killing is enacted on the 6th day, Murugan’s marriage to Valli or Valli Kalyanam is held on the 7th day. The wedding with Deivanai, follows, on the 8th day. Karthigai Deepam, too, is celebrated at the temple in a grand manner. The deepam will be lit in the hill temple. Karthigai star day on each month is regarded as sacred here.