Kukke Subramanya Temple is dedicated to Muruga, where he is worshipped as Lord of Serpents. It is situated in the village of Subramanya, in the district of Dakshina Kannada, Karnataka. The temple is located in a Western Ghats range where there is a wholesome environment. The temple overlooks the mountain Kumara Parvat. A lot of natural vegetation surrounds the temple. The pilgrims have to cross the Kumaradhara River to access the temple. This is one of the most revered temples of Muruga in South-India, where it has gained a lot of fervor. 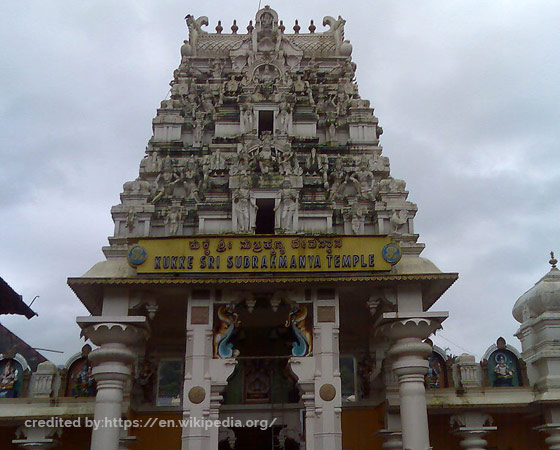 Subramanya is revered as the war hero, where he is also the Commander-in-chief of the army of Devas. Once when he demolished the demons, Tharaka, Shurapadmasura in the war, Muruga reached Kumara Parvatha with Ganesha. It is believed that he cleansed his lance in the holy river. To commemorate the success, Indra (King of Heaven)got his daughter married to Muruga. It was witnessed by several Gods, Demigods, and other celestial beings. There was a gush of holy rivers, which sanctifies the entire mountain, thus making it highly mystical.

Another legend connected with the temple is Vasuki, an ardent serpent devotee of Shiva. He sought refugee under Subramanya to avoid the contact of Garuda. It is to be noted that serpents and eagles are arch-rivals, and vultures and eagles kill snakes. Subramanya blessed Vasuki and appeared before him. Since then, Vasuki is venerated in this temple. It is also believed that the Puja offered to Lord Vasuki is equivalent to Puja offered to Lord Subramanya.

The architecture of the Kukke Subramanya Temple:

The temple is built in Dravidian Architecture. This temple complex faces the eastern direction. The main entrance of this temple is present at the back of the sanctum. There is a silver-plated garuda Kamba (pole) located in between the sanctum and the entrance of the temple. This is believed to have mystical powers and protects the devotees from the venomous breath of the serpent Vasuki inside the Sanctum Sanctorum. Subramanya appears with the serpent Vasuki inside the sanctum. The other shrines inside the complexes are Shiva, Goddess Nagaraja, and Ganesha.

There are several festivals celebrated in this temple. The festivals of Shasti, Kiru Shasti, Nagara Panchami, Nagaradhane have great reverence. Other than that Ugadi, Deepavali, and Makar Sankranthi are important festivals.

It is one of the powerful temples, where the Sarpa(snake) Dosha(curse) or the negative afflictions due to serpents are warded off. Many devotees partake in this Pooja to get relief from this curse. Naga Pratistha Pooja is also performed to bestow progeny to childless couples. Thus it is believed that any challenges in life because of serpents would be nullified in this temple.

How to reach Kukke Subramanya Temple

The airport at Mangalore is the nearest to this temple. It is advisable to resort to roadways from the temple.

KSRTC connects the town of Subramanya, with major cities of Karnataka. Other than busses, there are private cabs and autos.